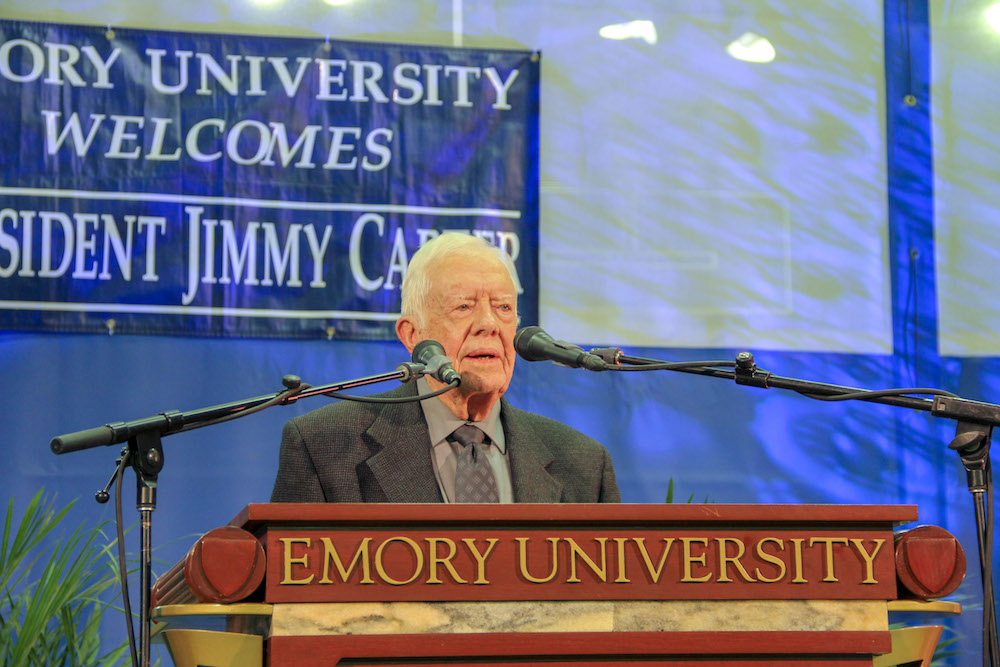 Former U.S. President and Emory University Distinguished Professor Jimmy Carter said on Wednesday that he would reverse all of President Donald J. Trump’s policies if he could but acknowledged Trump took the right step in meeting with North Korean leader Kim Jong-un this summer.

More than 1,700 Emory freshmen and other community members packed the Woodruff P.E. Center for the 37th Carter Town Hall, a tradition in which Carter, 93, answers questions from Emory students.

When asked which policies he would change or implement if elected president again, Carter said he would reverse all of Trump’s policies.

“If I were foolish enough to feel I could be president again,” Carter quipped, “I think the first thing I would do would be to change all of the policies that President Trump has initiated.”

His answer was met with forceful enthusiasm from the crowd.

However, Carter praised Trump for his diplomacy with North Korea. In June, Trump became the first sitting U.S. president to meet with a North Korean leader, though the agreement that resulted was mostly symbolic.

He said Trump’s negotiations with Kim were successful in the sense that they left an opening for mutual understanding and a possibility for future agreement. However, Carter said, the countries must take more steps to ensure denuclearization and prosperity.

On all other issues, however, Carter vehemently opposed Trump. In contrast to Trump’s “zero tolerance” immigration policy and his animosity toward U.S. allies, Carter embraced immigration and peaceful relations with other countries.

When asked what he believed was the greatest threat facing students’ generation, Carter responded, “I would say global warming,” noting that huge populations live near coastlines and will most likely face displacement in the future.

Carter said he hopes Trump does well in his presidency, “or at least better.” The 39th president added that he prays for Trump regularly.

“I pray for him fairly regularly,” Carter said. “If he answered my prayers, he’d have to change a lot of things.”

The former president fondly reminisced about his time at the Naval Academy, which instilled in him the value of always telling the truth. In contrast, Trump has made more than 4,000 false or misleading claims since he assumed the presidency, according to the Washington Post.

Carter also spoke extensively and lovingly of his wife former First Lady Rosalynn Carter, who did not accompany him to the town hall for the first time in 37 years because she was at another event for the Carter Center. When asked about the happiest day of his life, he said it was the day she agreed to marry him. The two are both from Plains, Ga., and still reside there.

Carter referenced both his wife of 72 years and his mother as heavy impacts on him.

“All of my life, I have been dominated by women,” Carter said. “And it’s been a voluntary thing on my part.”

He proudly announced that the female influences on him led him to appoint more female federal judges than all of his predecessors in history combined.

Then, Carter declared to cheers, “I am a feminist. And very proud of it.”

“For sandwiches, I prefer creamy peanut butter,” he said. “For munching during the day, [like] on a cracker, I prefer crunchy.”

Catherine Cole (22C) said Carter’s discussion on feminism was particularly important to her.

“I think it is important that feminism is well-defined in our community,” Cole said. “Especially by someone who falls outside of the general norm of what you might consider a feminist.”

“He keeps tying back every experience he’s had, whether as the president or as a student at the Naval Academy, to his wife,” Xie said. “I think having a focal point in that man’s life and that focal point being his wife is a moving element to his personality.”