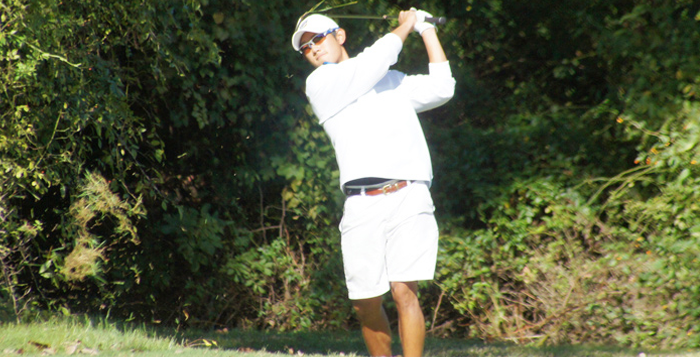 Courtesy of Emory Athletics
Senior Johnathan Chen watches his shot from the backswing. Chen, who said he was distracted from golf at the start of the season, decided that he will play professionally after graduation. Two weeks ago, he finished the Emory Invitational with a score of 69.

This fall didn’t go according to plan for senior golfer Johnathan Chen – well, not on the golf course anyways.

Coming off a third place overall finish at the 2013 Division III National Championship tournament, Chen was in the middle of the statistically worst season of his career.

Meanwhile, off the course, Chen, a Goizueta Business School student, was focused on his professional career: in August, he signed an offer letter to work at KPMG’s consulting group in San Francisco.

Even after the career victory of receiving an offer, something felt off for Chen, who is studying finance and strategic and management consulting. It wasn’t until his finals were over and he returned home to refocus on his golf game that he realized he wasn’t ready to give up golf just yet.

So, instead, Chen decided in January that he would play professional golf after graduation.

“Mainly it was me realizing that I have my whole life ahead of me to work in the corporate world … but I can be a consultant after I play golf,” Chen said. “The opportunity to play professional golf is not always going to be there. What put me over the edge to play golf over the corporate world was realizing that golf has been the dream I’ve always wanted to follow.”

When Chen speaks about his golf dreams, it’s not the typical athlete’s story. Chen’s primary focus was on tennis until an ACL tear in the beginning of high school forced him to move to golf full time. This late start to his golf career meant he never focused on the professional game and didn’t look up to the PGA tour’s biggest stars, such as Tiger Woods and Phil Mickelson, as many young golfers do.

Chen had never attended a professional event until his freshman year at Emory.

“I think my love of the game started with Dad,” Chen said. “He put the club in my hand for the first time and taught me lessons, like that you can’t show up to a tournament unprepared. It was really an outlet in that way for teaching me a lot of life lessons, and that has truly stuck with me ever since.”

Once Chen chose to play golf at Emory, he experienced immediate success. In his debut during the 2010-2011 season, his 74.21 scoring average was the lowest for a freshman in school history. He followed this performance up with first team all-University Athletic Association (UAA) honors during his sophomore year, before finishing third overall in Division III in his junior campaign, leading the Eagles to a fourth place overall finish in the division.

Despite his on-course success, his greatest contribution to the team might be his role as a mentor.

“[Chen] has been a great leader throughout his time at Emory,” senior Alec Berens said. “As a freshman he worked as hard as anyone else on the team. He has been a leader by example, and it has really had a profound effect on the rest of the teams drive and motivation.”

Once Chen made the decision to build off of this success at Emory and play professionally, there was no downtime. Due to the expensive travel costs and high tournament fees in professional golf, securing sponsorship is essential, he said.

Chen plans to use sponsorships from Taylor-Made and Bridgestone for his equipment needs and he has secured funding from family friends in Houston to cover the tournament and travel fees associated with playing on the tour.

The Texas native plans to stay in Atlanta in order to train and work as an assistant coach for the Emory golf team, but he will work to qualify for PGA Latin America and PGA Canada tournaments. As he prepares to navigate the complicated nature of the PGA tour – paying high fees, searching for tournaments and securing sponsorship – Chen has the benefit of knowing former Emory teammate, Ryan Dagerman (’12B), who played professionally for two years after graduation.

Dagerman has since moved back to the corporate world; he is currently working as an investment banker at TM Capital in New York.

“He has talked with me a lot and helped me learn the things he did well, which I can copy, and the things he did not, which I can stay away from,” Chen said. “I always looked up to him as a freshman. I was always trailing him by a little bit in everything, and he has really been an inspiration and role model for me.”

Support from the entire Emory program has poured in for Chen, and not just from Dagerman. Head Coach John Sjoberg worked as a PGA golf professional before working at Emory, and many of Chen’s teammates plan to support him in the upcoming years.

“I will try and attend any tournaments that I can, based on location and timing,” Berens said. “I think at this early stage of our lives it is important to chase dreams and do what you love.

Berens added that he supports Chen’s decision to go pro.

“He has been an incredible friend and teammate over the last four years, and I know he will succeed out on the pro circuit,” Berens said.

For now, Chen and his teammates are focused on finishing out the spring season. This spring has been Chen’s best statistical effort. Two weeks ago, he won the Emory Invitational tournament with a 69 (-3) in the final round.

Chen and the Eagles continue the spring season today at the Navy Invitational Tournament in Annapolis, Md.