The baseball team beat the Berry College Vikings Tuesday afternoon, using six pitchers in the 3-1 win. With the victory, the team improved their record to 12-9 in the season.

The season began slowly for the Eagles, and after 14 games their record stood at 6-8. However, they have won six of their last seven games and four in a row, to bring themselves back into the hunt for a postseason berth.

“It was a good win,” Head Coach Mike Twardoski said. “Berry is a good team. I’m very happy with what we have seen.”

Coming off a weekend game and going into a three-game weekend series, Coach Twardoski decided to rest his primary starting pitchers. Instead, the Eagles were led to victory by a combination of six different pitchers, who together allowed just one run and five hits in nine innings.

“We executed well on the mound,” junior catcher Jared Welch wrote in an email to the Wheel. “A key component to any player’s success is the ability to feel comfortable while in the game. When there are as many changes as we had, sometimes it’s hard for a pitcher to settle himself into the game, but all six guys did a really impressive job going from the start.”

“We were able to see a lot of pitching, and they all did quite well,” Twardoski said. “If we have to go on a roll, we need pitching.”

The Eagles got on board in the third inning. With sophomore Wes Peacock on second base and junior Brandon Hannon on first base, junior Daniel Itturey singled to drive in Peacock and give Emory a 1-0 lead.

Junior Matt McMahon took the mound for the Eagles in the fifth inning and allowed Berry to tie the game off a wild pitch.

However, with a runner on third, he managed a strike-out to end the inning.

The Eagles took the lead for good in the bottom of the inning. With Hannon on second base and Peacock on third base, Iturrey grounded out to drive in Peacock. Hannon then scored on a wild pitch, giving the Eagles a 3-1 lead.

Neither team scored any more runs in the game. Sophomore Michael Byman, freshman Steven Summey and sophomore Graham Bloomsmith each threw a scoreless inning for the Eagles to close out the game. McMahon earned the win, and Bloomsmith picked up his third save of the season.

“No one player took the game on his shoulders, and instead, we relied on a team effort to win the ballgame,” Welch wrote. “It is impossible to be perfect, but that is what we strive for. We scattered nine hits over the course of the ballgame, but a few more timely hits could have broken the game wide open.”

Both offenses were impeded by the cold weather.

“It is tough to have bat speed when it is that cold,” Twardoski said. “The thing about playing in the cold is that you need concentration. We need to focus on the game, not the elements. Everyone is cold. Our team did very well playing through the weather.”

The Eagles stellar defense made up for the lack of offensive production.

“I was very happy with our defense,” Twardoski said. “We made no errors, and that is why they scored only one run. Pitching and defense are what keep you in games.”

The Eagles next play Friday, when they begin a three-game series at home against Covenant College.

“This is a good chance to beat a good team and get back in the running for a regional bid,” Twardoski said. “I am very happy with where we are.” 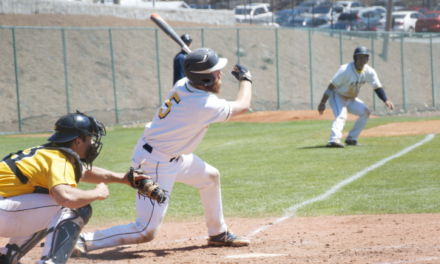