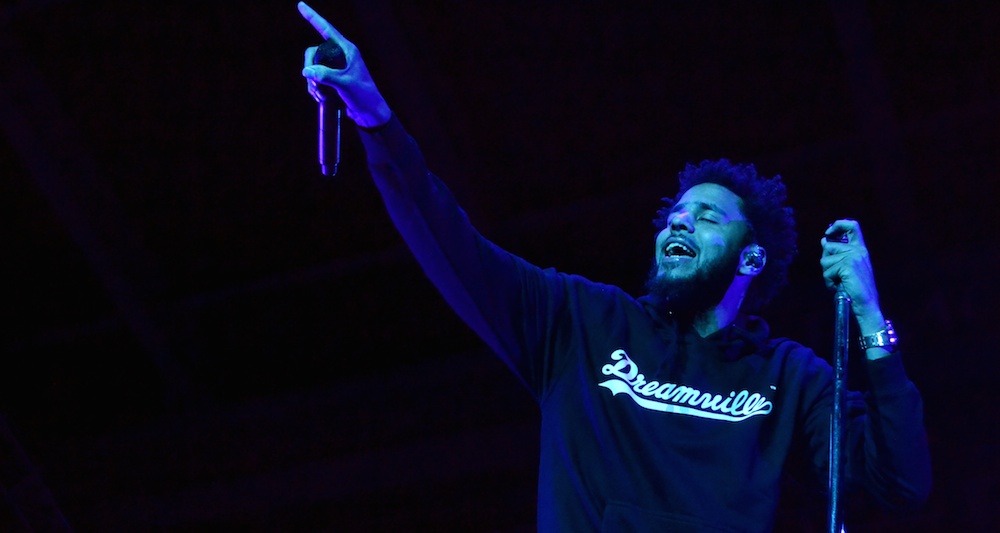 Expectations were high for J. Cole’s performance at “Dooley’s Frolics,” the headline concert for Dooley’s Week, on Friday, March 28. Fans lined up before 5 p.m. to be the first ones into the concert when doors opened up at 7 p.m.

When the doors finally did open at 7 p.m. (on the dot), the line had already snaked around the circle outside of the Woodruff Physical Education Center (WoodPEC). Goizueta Business School junior Josh Cowle said that the line “was the longest [he’s] ever seen it.”

As guests were let in, they accumulated around the stage, escaping from the brisk weather into the warmth of the crowd. Spirits were high.

But as the evening went on and continued to grow colder, the opening acts and J. Cole were still yet to be seen. Fans were beginning to grow restless.

Luckily the Student Programing Council (SPC), the organizers of the event, learned their lesson from the fiasco that was Chance the Rapper last year, and did not hand out glow sticks to the crowd. While we cannot be sure that similar near-rioting would have occurred this time, there was certainly a restless atmosphere similar to that of last year.

Finally, the opening acts came on stage at 8:30 p.m. The three openers, Omen, Cozz and Bas, were all rappers and members of Dreamville Records, J. Cole’s record label.

Omen went first, performing only one song. Then Cozz performed next, giving the crowd a set that consisted of a few songs.

Bas, who was the last of the openers, gave the strongest of the opening performances. He had great crowd control, with the crowd waving their hands and singing the hooks to some of his songs, such as “Fiji Water In My Iron.” Bas gave a rousing performance of “We Made It,” for which he brought a score of Dreamville entourage members on stage to bounce with him as he rapped.

With energies running high after Bas, the crowd eagerly anticipated J. Cole. But, unfortunately, we were subject to yet another lengthy wait between the openers and the headliner. The crowd was growing restless, with pockets of explicit chants rising and then falling throughout the crowd, airing grievances against SPC, Emory and J. Cole. If people were not too busy huddling together shivering to keep warm, we might have seen a repeat of the massive chants and boos that the crowd partook in last year when Chance the Rapper was slow to start his set.

Finally, J. Cole came out at 9:40 p.m., almost three hours after the doors opened. He opened with “Nobody’s Perfect,” a classic cut from his 2011 freshman album Cole World. The tension that had just gripped the crowd evaporated. McDonough was illuminated by the flashes of guests’ smartphone cameras.

Then J. Cole transitioned to his new material, mostly from his new album 2014 Forest Hills Drive. “Wet Dreamz” was a standout performance, with the crowd singing along. I thought it was pretty funny that so many people were singing along to a song about nocturnal emissions — but hey, whatever floats your boat, Emory.

“G.O.M.D.” was another standout performance. J. Cole bounced around stage as he sung the chorus (which is certainly not publishable in this newspaper) with a ferocity in his voice. The crowd loved his emotive performance, bouncing around and singing along the entire time. Audience members’ phone camera flashes acted as strobe lights, suitable for this turnt up track.

J. Cole went on from his new material to some of his greatest hits, including “Work Out” and “Crooked Smile,” before concluding with my personal favorite song in his catalog, “Power Trip.” The crowd enthusiastically sang and danced along to these hits. After the song ended, with the sound of its booming, warbled baseline fading into the chatter of the crowd, the lights quickly dimmed to off. The show was over.

The show ended at 10:36 p.m. — less than an hour after J. Cole arrived on stage. While J. Cole was a great performer, the brevity of his set and his lateness really undermined what the show could have been. It was a bittersweet performance.

I got the sense that J. Cole could not have cared less about this concert. He just came to get his money, play the shortest set possible and leave.

Throughout the show, J. Cole sounded great and had great crowd control, making the audience sympathize with him on the sad songs and turn up on the more upbeat songs. The openers were impressive as well. J. Cole is truly a great artist and it certainly showed during his set. When he was spitting, he got the crowd fired up, despite how cold it was outside. But the quality of the performance did not quite make up for how late it started and how short it was. To paraphrase J. Cole: We couldn’t get enough of him, but hey, nobody’s perfect.