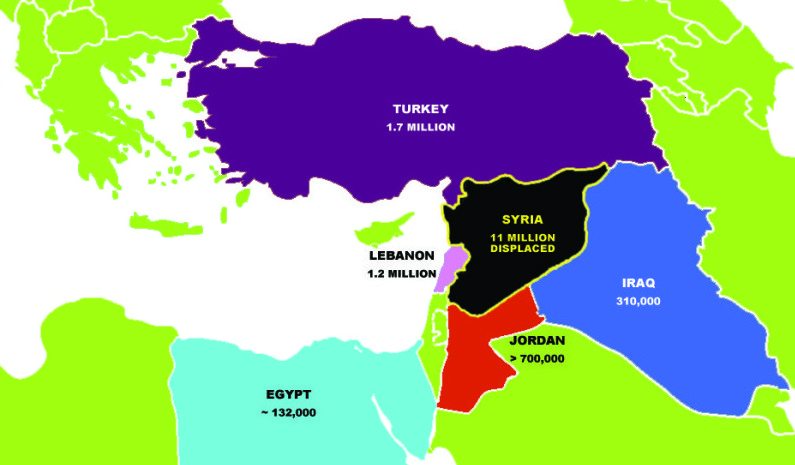 A majority of those fleeing war-torn Syria have found refuge in bordering countries. (Graphic by Erik Alexander)

Images of a drowned three-year-old Syrian boy — Aylan Kurdi — washed up on Mediterranean shores rippled across global media last week, throwing the long-neglected international refugee crisis into the spotlight. In the wake of the jarring image of the boy lying face down in the surf, pictures and videos of other refugees streaming across Europe have dominated headlines.

While the American media has finally taken up the plight of Syrian refugees, the United States government has yet to do the same.

The world is in its worst refugee crisis since the end of World War II, with more than 19 million international refugees having fled their home countries. More than four million of these refugees are from war-ravaged Syria, making it the largest current contributor to the global refugee population.

The international response to the refugees streaming from Syria has been mixed. Many of Syria’s neighbors have taken on a tremendous number of the refugees. Over half of those fleeing Syria have relocated to Turkey. Lebanon has taken more than 1.2 million refugees, a great burden for a country with a population of just over four million. And last week, Germany announced that it will be accepting 800,000 refugees this year.

The United States has yet to step up as these other countries have. The government has only accepted 1,500 Syrian refugees since the start of civil war in 2011. The Obama administration announced in August that it would take 8,000 refugees in the next year, but this is far short of enough. The International Rescue Committee, an Atlanta based nonprofit organization, has called on the United States to increase the number of Syrian refugees it takes in the next year to 65,000. Oxfam America and a group of 14 Democratic Senators have called for similar numbers.

The United States has by far the greatest capacity to take in refugees of any country in the world. The Office of Refugee Resettlement at the Department of Health and Human Services orchestrates a vast infrastructure for assimilating refugees run by partnerships with nonprofit-government partnerships. Since 1975, the United States has resettled more than three million refugees — more than any other country in the world — taking in 70,000 in 2013 and 2014.

Yet the United States government has resettled so few Syrian refugees because of concerns that the refugees may be connected to terrorist organizations. Under current policies, refugees are carefully vetted, a process often taking up to 18 months.

In May, Republican Congressman Michael McCaul, head of the Homeland Security Committee in the House of Representatives, said this in reference to Syrian refugees: “We have no way … to know who these people are, and so I think bringing them in is a serious mistake.”

Kentucky Senator and Presidential candidate Rand Paul was similarly skeptical that Syrian refugees may have terrorist connections in an interview last Thursday with BuzzFeed. Paul noted, “We do have to be careful with this, and we should have a warm and welcoming heart, but we also just can’t accept the whole world to come here.”

While terrorism is certainly a real concern, such claims reek of Islamophobia. There is no reason to assume that these refugees, driven from their homes by war, often at the hands of terrorists, are terrorists themselves. Justifying the denial of refugee status in the United States to these displaced Syrians on the remote, totally hypothetical possibility that they may have terrorist connections is a denial of the compassion for displaced people that this country was founded upon.

Since the Pilgrims landed on Plymouth Rock fleeing religious persecution in Europe, the United States has provided refuge for the world’s oppressed and displaced. After World War II, the United States took in more than 650,000 European refugees. We also took in many refugees from countries involved in wars and revolutions since World War II, including many from Cuba, Korea and Iran. These refugee groups have assimilated into American society, becoming some of the most successful ethnic groups in this country.

The United States should afford Syrians the same opportunity.

In the past week, glimmers of hope emerged that the United States will accept more Syrian refugees. President Obama praised Germany’s decision to step up to the moral plate and take refugees in. And now that the media is paying attention to the crisis, the American public may react with compassion. Then again, in this age of nativism and “all lives matter,” such a public response seems less than likely.

But there remains hope: When Donald Trump was asked if the United States should help Europe by accepting some refugees, he responded, “possibly, yes.” If the man who considers Mexican Americans “criminals, drug dealers and rapists” is decent enough to acknowledge that we should take in more Syrian refugees, hopefully more sensible politicians can reach the same conclusion.