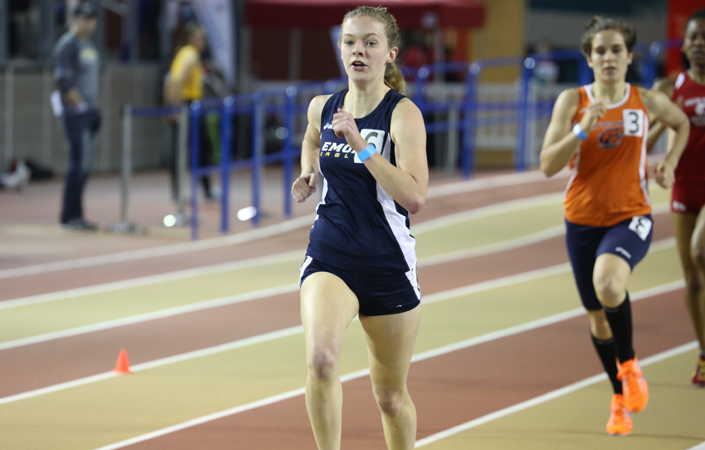 Junior University Athletic Association (UAA) Athlete of the Week Julie Williamson runs to the finish. Williamson and the Eagles will compete at the Buccaneer Track Invite in Tennessee next weekend. / Courtesy of Emory Athletics

This past weekend, the Emory men’s and women’s track and field teams continued their indoor season at the Hilton Garden Invitational in Winston-Salem, N.C., where many Eagles displayed strong performances.

Junior Julie Williamson followed up her strong performance last weekend at the Emory Crossplex Invitational with another impressive outing this week by taking a 10th place finish in the 800-meter run and improving her NCAA Division III Championship qualifying time to 2:16.17.

“It was a great opportunity to run on the track where nationals will be held this year,” Williamson said. “We’re now number two in the nation, and we’re looking to shave off even more time in the coming weeks.”

On the men’s side, junior Spencer Koh pole vaulted a height of 4.25 meters, securing a fourth place finish. Senior James Bassen took 25th place with a distance of 13.32 meters in the weight throw competition.

“James Bassen is a league above the rest of the [University Athletic Association conference] UAA,” Bassen’s teammate sophomore Michael McBane said.
Continuing the strong showing for the men was senior Kevin Delaney who shined in the 800-meter run, finishing 40th with a time of 1:58.77. Freshman Charles King and junior Andrew Hemingway ran well in the same event with times of 2:02.10 and 2:02.97, respectively. Freshman Benjamin Rogin also impressed with a time of 8.68 seconds in the 60-meter hurdle preliminaries.

In the women’s 200-meter dash, senior and two-time All-American Electra Korn came in sixth place with a time of 25.63. In the 200-meter relay, Korn anchored lead freshman Julia Levnthal, freshman Eirca Goldman and junior Julie Williamson to a clock a time of 3:58.78 and secure eighth place with the second fastest Eagles time this season. Freshman Zoe Fowler finished 31st in the weight throw with a distance of 11.32 meters.

“We have a solid set of 400-meter runners,” McBane said. “We always have a lot of killer athletes, and this year is no different.”

“It’s my first good race back since I was injured,” McBane said. “But [Harden], has kept believing in me and has been so supportive throughout the tough times.”

The Eagles will continue their indoor season next weekend, heading to the East Tennessee State University for the Buccaneer Track & Field Invitational on Friday, Feb. 6 and Saturday, Feb. 7. 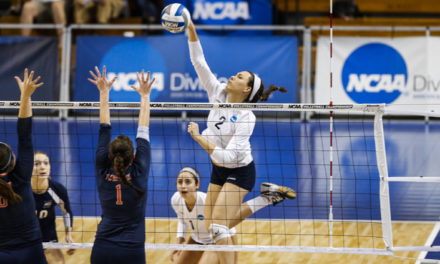 Volleyball’s Goal This Season: Win It All