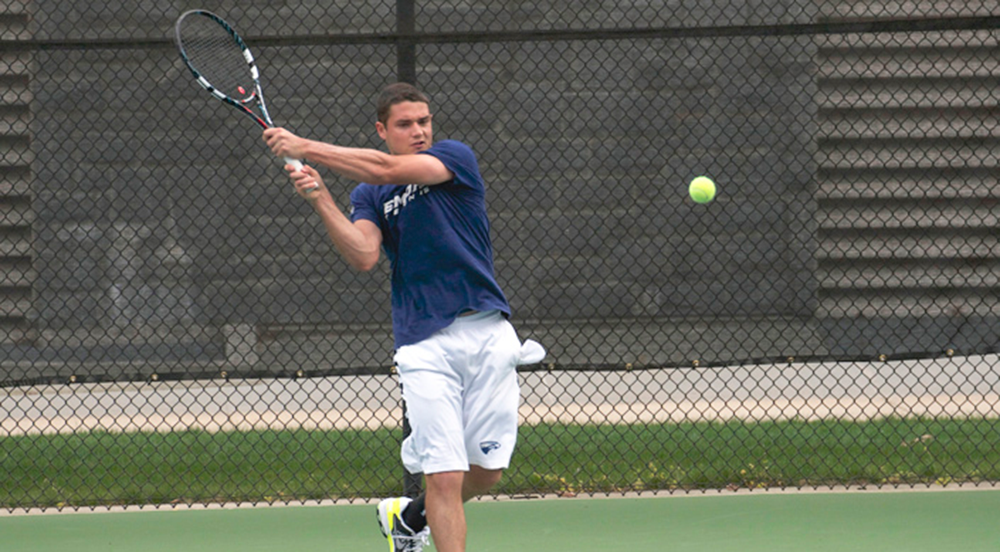 Sophomore Josh Goodman launches the ball back over the net. Goodman and the Eagles won at Sewanee: University of the South (Tenn.) Wednesday. | Courtesy of Emory Athletics

The Emory men’s tennis team defeated the Sewanee: University of the South (Tenn.) Tigers 9-0 on Wednesday.

Junior Rafe Mosetick took up the first singles position, defeating sophomore Avery Schober in a three set match 6-4, 2-6 and 6-1. Senior Alex Ruderman played second singles, defeating junior Eric Roddy in straight sets 6-1 and 7-6. Senior Ian Wagner played third singles, winning against junior Connor Winkler 6-3 and 6-1. Sophomore Josh Goodman defeated freshman Davis Owen 6-2 and 6-1 in the fourth singles position. Sophomore Aman Manji played fifth singles, beating senior Alex Cooper 6-0 and 6-4. Freshman David Omsky wrapped up the singles competition, defeating sophomore Scott Gallimore 6-1 and 6-3.
“We played well and we stayed focused,” Mosetick said. “After our loss at [Middlebury College (Vt.)] we needed a match to get our heads back on right and this definitely helped. We’ve kind of gotten complacent lately. We needed that Middlebury match to get us into focus.”
In the doubles competition, Ruderman partnered with Wagner in the first singles spot, defeating the Sewanee team of Cooper and Roddy 8-3 in a pro set. Mosetick replaced senior Eric Halpern, playing second singles with Omsky, and defeated Sewanee’s Owen and Schober 8-2. Manji and freshman Scott Rubinstein defeated Sewanee’s Gallimore and Winkler 8-2 in third doubles.
With the season coming to a close, the team is focused on preparing for the University Athletic Association (UAA) Conference Championships, and the NCAA Championships down the line, Mosetick added.
In 2012, the Eagles won the UAA Championships. The next year, they placed second, and last year, they placed third.
In 2012, the Eagles won the NCAA Tournament, and, in 2011, they came in second. Since then, however, the Eagles best finish has been in the quarterfinals.
“We really are focused on preparing for the NCAAs,” Mosetick said. “We’re going to focus on our fitness. These matches are long and daunting. The real goal is to play thousands of hours to prepare for that.”
With three strong seniors on the team, other team members feel they can make a big run at the NCAA Championships, according to Ruderman.
“That’s the goal for the season,” Ruderman said. “Every game, every practice is to prepare for the NCAA Championship. Winning the tournament my freshman year was a completely surreal experience … We have a really strong team this year, and it’s my last chance, so I’m going to do everything I can to win.”
Emory will continue its season on April 21 when the team will travel to play Georgia Gwinnett College at 2 p.m.