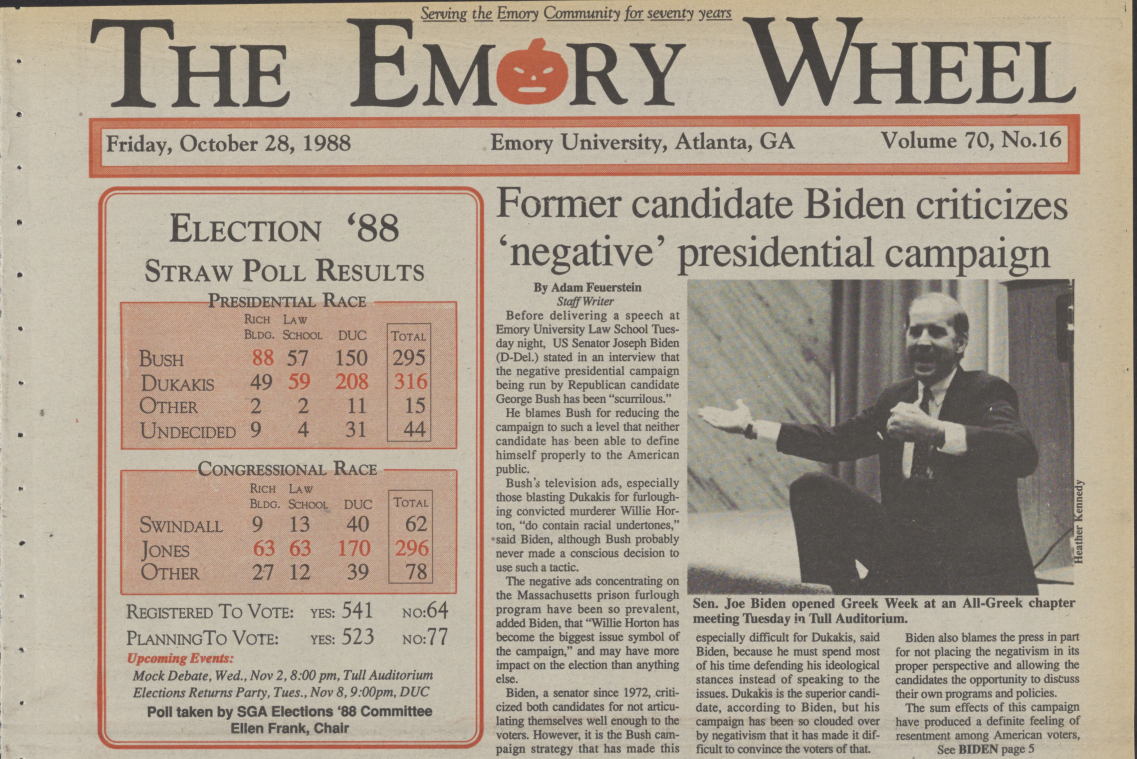 Before delivering a speech at Emory University Law School Tuesday night, U.S. Senator Joseph Biden (D-Del.) stated in an interview that the negative presidential campaign being run by Republican candidate George Bush had been “scurrilous.”

He blames Bush for reducing the campaign to such a level that neither candidate has been able to define himself properly to the American public.

Bush’s television ads, especially those blasting Dukakis for furloughing convicted murderer Willie Horton, “do contain racial undertones,” said Biden, although Bush probably never made a conscious decision to use such a tactic.

The negative ads concentrating on the Massachusetts prison furlough program have been so prevalent, added Biden, that “Willie Horton has become the biggest issue symbol of the campaign,” and may have more impact on the election than anything else.

Biden, a senator since 1972, criticized both candidates for not articulating themselves well enough to the voters. However, it is the Bush campaign strategy that has made this especially difficult for Dukakis, said Biden, because he must spend most of his time defending his ideological stances instead of speaking to the issues. Dukakis is the superior candidate, according to Biden, but his campaign has been so clouded over by negativism that it has made it difficult to convince voters of that.

Biden also blames the press in part for not placing the negativism in its proper perspective and allowing the candidates the opportunity to discuss their own programs and policies.

The sum effects of this campaign have produced a definite feeling of resentment among American voters, said Biden. He added that this election will most likely have a very low voter turnout because the American public does not know where either candidate stands.

This low voter turnout, according to Biden, will place the next president in the weakest possible position. There will be no mandate or general consensus to lead and “he will be forced to define himself and his policies to the American public at the same time as he is dealing with the issues and making policy,” said Biden.

In a related issue, Biden stated that the next president will have most likely the responsibility of appointing four or five new justices to the Supreme Court. As Chairman of the Senate Judiciary Committee, Biden feels that appointees must have an “understanding of the expansive nature of the Constitution.”

“There are rights in the Constitution” explained Biden, “that have yet to be enumerated.” He added that future Supreme Court Justices need to realize their rights, once given to the American public, cannot be taken away.

As the key figure involved in rejecting the nomination of Robert Bork to the Supreme Court, Biden explained that he did not vote against Bork because he was an ideological conservative. Instead Bork was rejected because he sought to restrict the rights guaranteed under the Constitution. Biden added that Supreme Court Justices could be conservative or liberal as long as they believe in the expansive nature of the Constitution.

At a reception following his speech, Biden continued his talk, speaking at length about his own unsuccessful campaign for the presidency, which was plagued by allegations of plagiarism, most notably of a speech given by British Labour Party leader Neil Kinnock.

Biden explained that in his standard stump speech, he always used and credited the quotation from Kinnock. At one debate, however, Biden admitted he made a mistake by using the quotation without first citing Kinnock as the source. At the time no mention was made in the press about the mistake.

Two months later, Biden continued, as the Bork confirmation hearings were getting under way, reports surfaced in the press that he had plagiarized a speech given by Kinnock. In addition, a videotape was circulated and shown on television, showing Biden and Kinnock, side by side, speaking the same words.

Biden readily admits fault for not citing the quotation, but he blames both conservative Republicans and his opponents in the Democratic presidential primaries for trying to smear his image as a presidential candidate and to mount a last ditch effort to save the Bork nomination.

Biden stated that he withdrew from the presidential race mainly because he was unable to contribute the time necessary to clear his name while still presiding over the Bork hearings. Biden called the press coverage following the plagiarism charge as being like a “tidal wave.”

He added that, “It takes weeks and weeks of steady campaigning to overturn such negative publicity because it cannot be left unanswered.” This was time that Biden admitted he did not have.

Soon after the conclusion of the Bork hearings, Biden suffered from two separate aneurisms in the cavity below the brain, which required major surgery. After seven months of treatment and recuperation, Biden has recently returned to the Senate.

He currently plans to run for reelection in 1990.