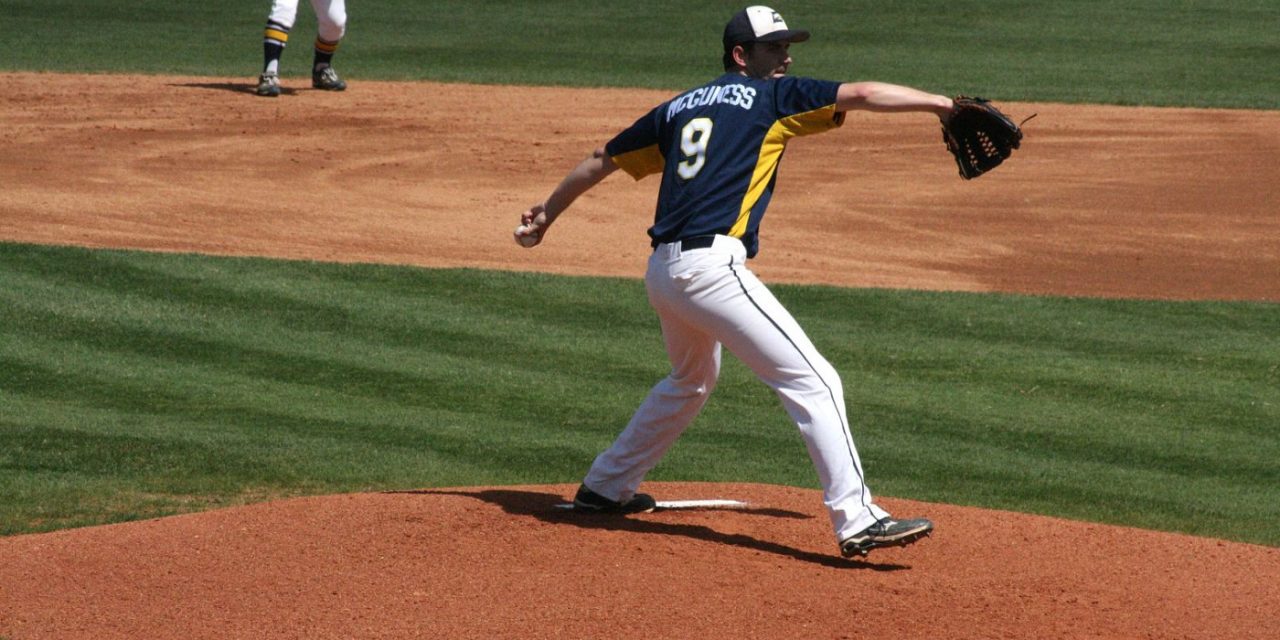 As the confetti fell from the sky, Connor McGuiness (12C) finally came face to face with his childhood dream: the Commissioner’s Trophy.

One year ago, McGuiness was hired by the Los Angeles Dodgers as an assistant pitching coach and, in the course of this crazy year, helped the team overcome many of the challenges that prevented them from reaching baseball immortality. This past season, McGuiness helped the  Dodgers to the best record in Major League Baseball and, eventually, a World Series title.

But his journey to become a World Series champion actually began here, at Emory, a Division III school not well known for its baseball program. McGuiness enrolled in 2008 and was a starting pitcher for the Eagles. But after suffering multiple injuries during his sophomore year, he took the mound only infrequently, and he began the gradual transition from player to coach.

McGuiness posted his best numbers during his senior season, when he appeared in nine games and recorded a 4.50 ERA and held batters to .140 average. He holds the fourth-place spot for most career pickoffs by an Eagles pitcher with 10.

From the dugout during his sophomore and junior years, he watched the game from a different perspective and played a valuable role for the team by scouting other teams. After graduating with degrees in economics and finance, McGuiness was looking to go to law school. When Emory needed a pitching coach in 2013, however, he couldn’t turn down the opportunity to get back into the game of baseball and come back to his alma mater. 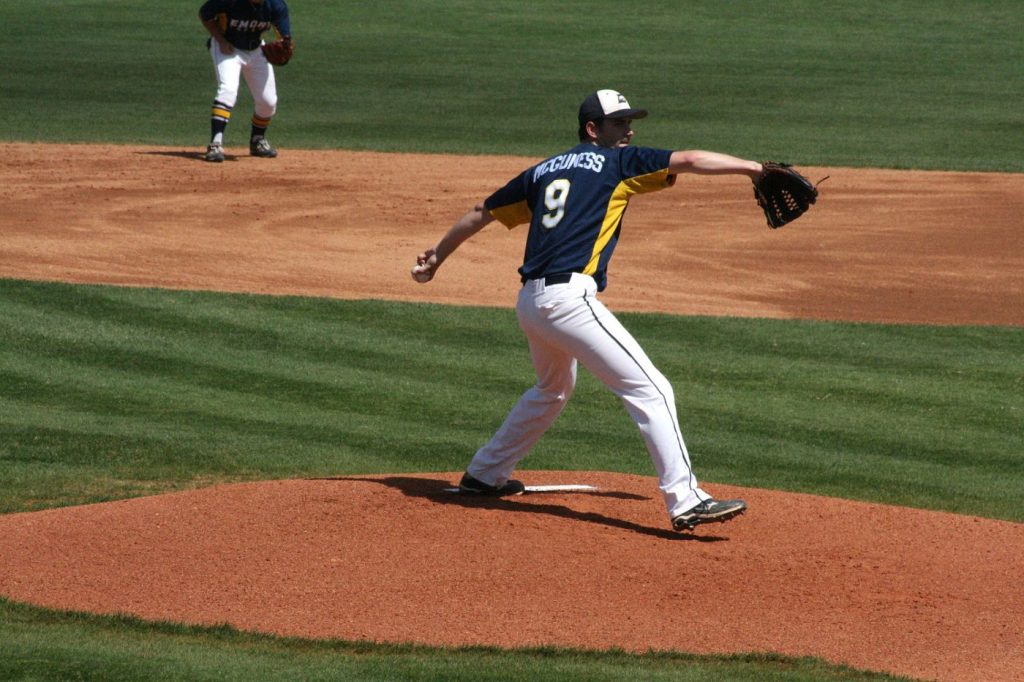 Connor McGuiness (12C) winds up to pitch at the plate. McGuiness played for Emory from 2009-2012 and is now the assistant pitching coach for the Los Angeles Dodgers./Courtesy of Emory Photo

“[As] luck would have it, Emory needed a pitching coach,” McGuiness said. “And so Coach [Mike Twardoski] called me up and asked if I wanted to come back. That’s kind of when it really started to get going.”

After the 2015 season, he began looking toward the future and figured he should get a master’s degree, but he didn’t want to give up baseball. He moved back to his hometown of Washington, D.C., and pursued a master’s degree at the Catholic University of America (CUA) (D.C.) while serving as the graduate assistant coach for CUA’s baseball team, allowing him to pursue his two passions.

McGuiness kept his options open throughout his post-Emory years. He bartended, mowed lawns, and did arbitration work and analysis for a sports agent for free.

During his second year at CUA, MLB held its annual winter meetings in D.C. Jeremy Zoll, one of McGuiness’ hometown friends who had played ball with him growing up, was the assistant farm director to the Dodgers at the time and was in town. McGuiness reached out to Zoll to grab a drink and catch up, and Zoll gave McGuiness advice on how to stand out to baseball teams.

McGuiness always thought college baseball was where he would eventually find his place, but Zoll suggested looking for professional opportunities. Zoll connected him with Gabe Kapler, the director of player development for the Dodgers at the time, who is now the manager of the San Francisco Giants. McGuiness shared his thoughts on baseball and the Dodgers’ future.

A few months later Kapler called McGuiness to offer him a position with the Dodgers as a minor league pitching coach, a position that he quickly outgrew. He was originally hired to coach the Ogden Raptors, the Dodgers’ rookie ball affiliate, the same team for which he had interned in his junior year of college, hanging signs on the outfield wall and setting up the Jumbotron.

“I thought it was pretty ironic and kind of crazy to have the intern of the Ogden Raptors now coming back to be pitching coach,” McGuiness said.

His next stop was Midland, Michigan, where he coached the Great Lakes Loons, the Dodgers’ Class A affiliate. In Michigan, he coached numerous future MLB pitchers, including Dustin May and Tony Gonsolin, who each played crucial roles in the Dodgers’ success this season. Within three years, McGuiness moved quickly up the ranks of the farm system until he reached the big leagues.

In December 2019, he accepted an offer as an assistant pitching coach with the Dodgers and, in his first season, helped coach the team to their first World Series title since 1988. McGuiness coached a star-studded pitching group headlined by All-Stars Clayton Kershaw and Walker Buehler. When his team won, the experience was unlike anything he could have imagined.

“It was a pretty surreal moment,” McGuiness said. ”The Dodgers, as an organization, have been doing really, really well recently, and it just felt like we were so close for so many years. And all I wanted to do is try to come in and help move the needle slightly.”

Since becoming a World Series champion, McGuiness returned to Los Angeles from Houston and has been quarantining after interacting with Dodgers third baseman Justin Turner, who tested positive for the coronavirus in the middle of Game 6, during the post-championship celebration.

During his quarantine, McGuiness has heard from former classmates and teammates and is grateful for people who helped him along the way.

“I think people that I knew at Emory are more surprised than anything,” McGuiness said. “There are a couple of alumni that are like, ‘Wait a second, you go to the Dodgers, what’s going on here?’”

McGuiness credits his time at Emory as crucial to his success. The University, most importantly, taught him how to learn for himself, a lesson he believes is valuable to any Emory student looking to pursue their passion.

“I was able to flip my grades around and get rolling and really dive into my passion,” McGuiness said. “If you learn how to learn for you, specifically, a lot of [the] coolest things can happen.”