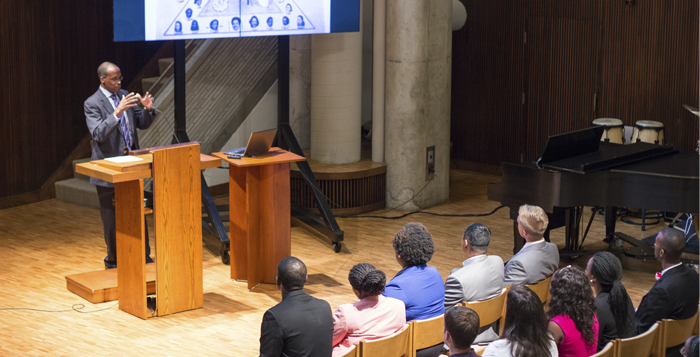 Kimbrough, who worked at Emory from 1992-1995 as coordinator of Greek Life, is renowned as an expert on fraternities and sororities with a particular focus on historically black, Latino and Asian organizations. He is also the author of the book Black Greek 101: The Culture, Customs and Challenges of Black Fraternities and Sororities.

In his characteristic conversational style, Kimbrough led the audience through a chronological survey tracing the emergence of black and multicultural Greek societies across the United States.

As Kimbrough explained, the beginning of the 20th century marked a turning point for the experiences of black people in academia because there was finally a “critical mass of African-Americans coming into higher education.”

In 1906, Alpha Phi Alpha, the first black fraternity, was established at Cornell University. Then, a decade later, the first Asian fraternity was established, also at Cornell. Kimbrough described how in the 1930s, black fraternities began to receive more credibility and started springing up on campuses across the country. In the 1970s, fraternities for other ethnic groups became widespread.

Throughout the presentation, Kimbrough engaged the audience by interspersing his talk with vintage photographs, personal anecdotes and questions for those in attendance.

He also utilized primary documents to demonstrate the considerable changes to greek life over the past century, as well as to show evidence of the motives that drove the founders of culturally based sororities and fraternities to establish their organizations.

For example, Kimbrough presented writings revealing how early members of many black fraternities placed great emphasis on the notion that, as he put it, “the ideals of their organizations were bigger than the individuals [within them].”

He added that these fraternities were primarily concerned with education and self-advancement, so their festivities typically involved reenacting scenes from literature or inviting academics to deliver speeches.

“I really appreciated the fact that Kimbrough mentioned how there was a change from the founder’s ideals and how prior to this time, [Greek Life] was more academic as opposed to more social,” said College junior Dottie Stearns. “A lot of us agree that we’d like to see a slight transition back.”

In addition to speaking about the history of Black, Latino and Asian fraternities and sororities, Kimbrough also talked about present-day Greek life and the importance of multicultural and culturally based organizations on college campuses in the 21st century.

“Culturally based groups have a rich history in the US, and they’re still evolving,” Kimbrough said. “They’re doing different things, but they are reflective of the changing demographics of American society.”

“These groups become a common area for students of different backgrounds to have this inter-fraternal connection, and it’s a great opportunity because people can have a Greek experience regardless of race,” Kimbrough continued.

College junior Nina Onuoha agreed, adding: “I think these culturally based organizations can bring light to issues that we still need to address, like, for example, even though we’re already diverse, how can we make an even more inclusive environment?”

One way to do this, Kimbrough suggested, was to ensure that on a campus like Emory’s, “where already there really is no ethnic majority,” people continue to express their heritage and pursue their interests through cultural organizations “that represent what’s happening across the country.”

NPHC Week continues through Sunday with a number of events across campus open to students.

Ma Under Investigation For Electoral Misconduct