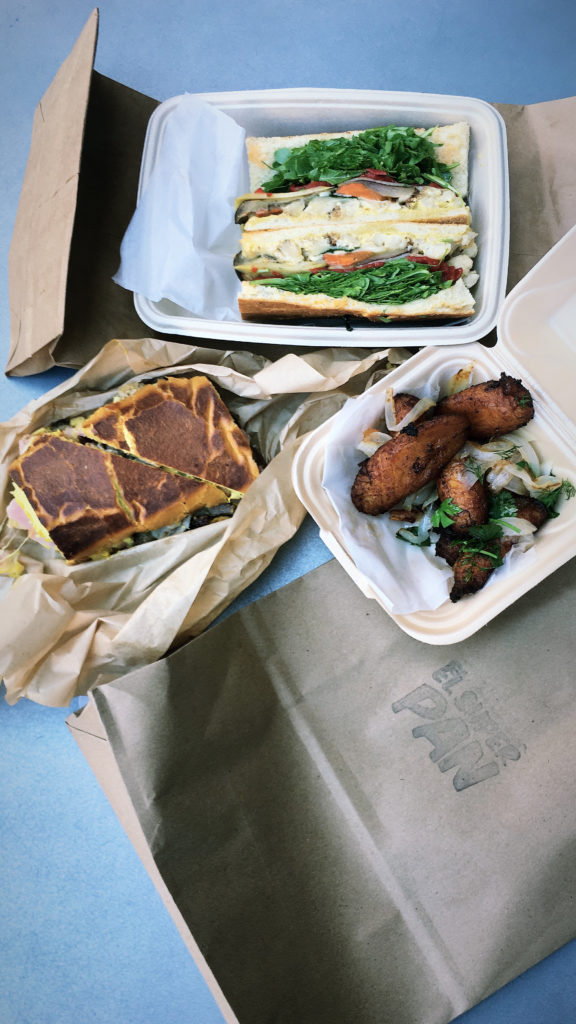 Within walking distance of the Atlanta Braves’ SunTrust Park, the newly opened El Super Pan at The Battery could look the part of any other casual sports bar. Step inside, however, and the Latino sandwich diner begins to narrate its own story, set to the sensual vocals of Enrique Iglesias, urging me to chase after the smell of freshly baked pastries and the Cuban-themed relics for sale. Not long after my friend and I placed our orders — we chose carry-out for convenience — we wandered around to the bar to retrieve our brown-paper bagged sandwiches.

Offering vegetarian and meat options from Puerto Rican Chef Hector Santiago, El Super Pan packs a punch of freshness and refinement in its preparation of grilled and cold sandwiches. For my main course, I placed a half order of the Media Noche: pan de huevo, adobo-roasted pork (adobo is a dry spice rub common in Latin American cuisine), ham, chicharron, Swiss cheese, pickles and yellow mustard. El Super Pan bakes all of its breads, buns and sweets in-house, and offers tostones, or twice-fried slices of green plantain, as a gluten-free substitute for an extra 50 cents.

As I ripped into my Media Noche, the succulence of the slowly roasted pork immediately coated my mouth. The chunks of well-done meat were soaked in a spice marinade that highlighted the nutty Swiss cheese, sweet cured ham and sharp, tangy mustard. The sturdy sugar-crusted pan de huevo, similar to a French brioche-style bread, kept the meat and cheese package intact. With the spongy texture of a wedding cake and the robustness of a dark stout, Media Noche’s buns were the kind of guilty pleasure for a late-night treat — hence the name. However, due to the lack of any nutritional greens, the Media Noche was a little too heavy for my liking.

With most of my sandwich downed, I focused my attention on another Cuban delicacy: maduros, or roasted sweet ripened plantains. I hoped the starchy vegetable would provide some nutrition to accompany my carnivorous meal. My friend and I agreed that the savory plantains nicely complemented our sandwiches. They melted in our mouths like a Bananas Foster.

My friend, a vegetarian, ordered the Farm Cubano: Spanish focaccia, adobo-roasted veggies, pickled chayote (a green, pear-shaped squash), Thomasville Tomme cheese, herbs and Dijon mustard. He said his entrée was well-seasoned, but that the focaccia could have used more toasting. He compared the bizarre mix of vegetables to sambar, a South-Indian vegetable stew from his childhood, and added that the Farm Cubano’s spinach balanced the smokiness of the roasted eggplant. The adobo-roasted veggies and pickled chayote reminded him of comfort food, while the subtle, starchy sweetness of the spinach focaccia kept him coming back for more.

Considering the steady stream of college students and families walking by, I expected El Super Pan at The Battery to be densely packed. Instead, the establishment did not have a line and less than 10 people were scattered among the different seating areas.

Casual lunch and dinner customers can choose between sitting in the main room, with a large projector screen for viewing sports games, and lounging on the barstools at either the indoor bar or outdoor patio. Additionally, a private dining room and bar, called El Salon Tropical, can be reserved for special occasions.

Overall, dining at El Super Pan was nearly a “super” experience. Despite the establishment’s fine attention to detail — meticulously crafted sandwiches and well-thought-out decor — I find it difficult to justify the overall price of roughly $35 — meal and round-trip ride fare — on a college student budget. For a more convenient and inexpensive option, I would order a lunch combo between 11 a.m. and 3 p.m., Monday through Friday, for $9.50 from the El Super Pan location at Ponce City Market.

Even as a carnivore, I can safely recommend the Farm Cubano’s adobo-roasted veggies on Spanish focaccia. Also, do not underestimate the portion sizes — half a sandwich and a side of maduros provided the perfect amount of food. With its bold attempt to remain rooted in Central American cuisine, El Super Pan may become my first choice the next time I’m craving a grilled sandwich.