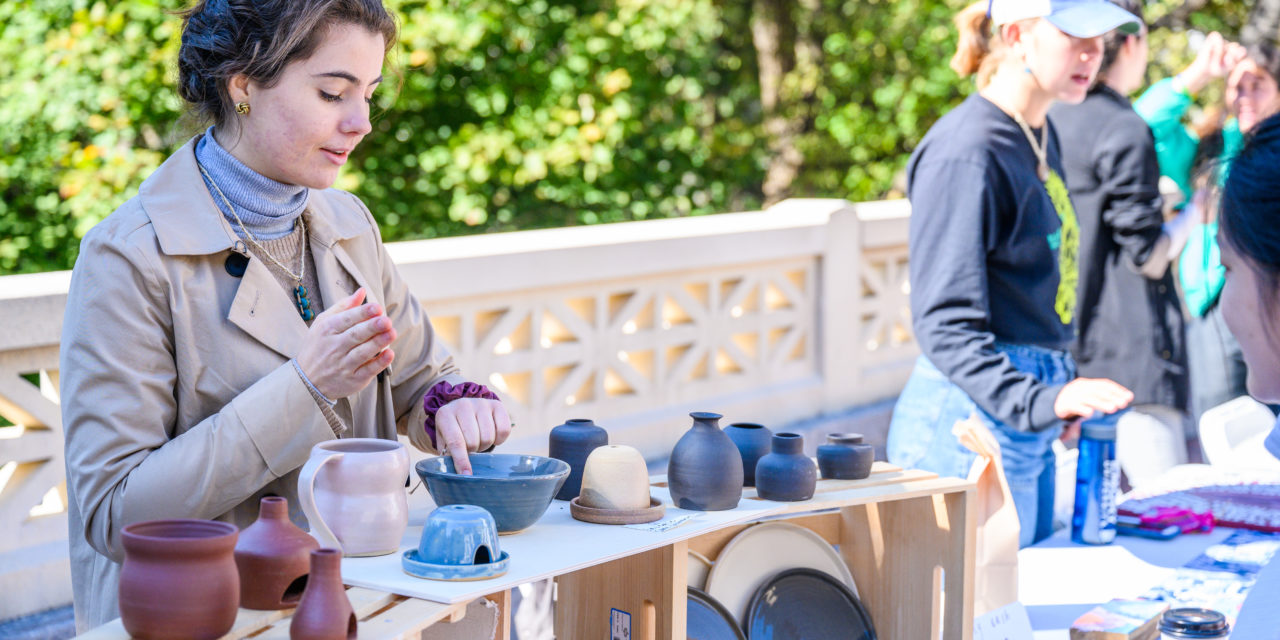 Gisele Schemankewitz (20C), who was involved in planning the event, modeled the market’s concept after a local flea market she discovered while studying abroad in Australia in Fall 2018. Schemankewitz said she would visit the market every Saturday at a school near her hostel.

Soon after returning to Emory in Spring 2019, her friend Janis Choi (20C) asked her about a pair of earrings that Schemankewitz bought at the Australian market. Schemankewitz said their conversation suddenly ignited her interest in organizing a similar arts and crafts market at Emory.

During Fall 2019, Choi and Schemankewitz began researching how to make their vision a reality. They decided to co-host the event with SGA, which would provide funding for promotional material, event signage and license for students to sell items on campus.

To gauge the event’s participation , Choi and Schemankewitz sent out a survey that evaluated what student vendors would sell and potential pricing.

“Through my friends, I have seen so much potential and talent that is not broadcast any other way,” Schemankewitz said. “There is not really a platform to show it off.  People have these Instagrams and things they do that nobody knows about.”

Many of the student artisans weaved stories into their sales pitches at the Market, revealing an intimacy that social media does not convey.

Kate Bachman (18Ox, 21B), a candle maker who works at a local ceramics studio, spoke about her passion for trying different materials within her art.

“I’m really experimenting with rock clay because it is a little bit more sustainable, and they would biodegrade,” Bachman said. “For me, what’s fun about it is there are so many parts that can go wrong, and there is always more to learn.”

Bachman’s two-tiered display housed an assortment of candle holders and herbal oils that she made from scratch. While interested customers gawked at her handcrafted vessels, Bachman encouraged shoppers to smell the naturally scented candles. 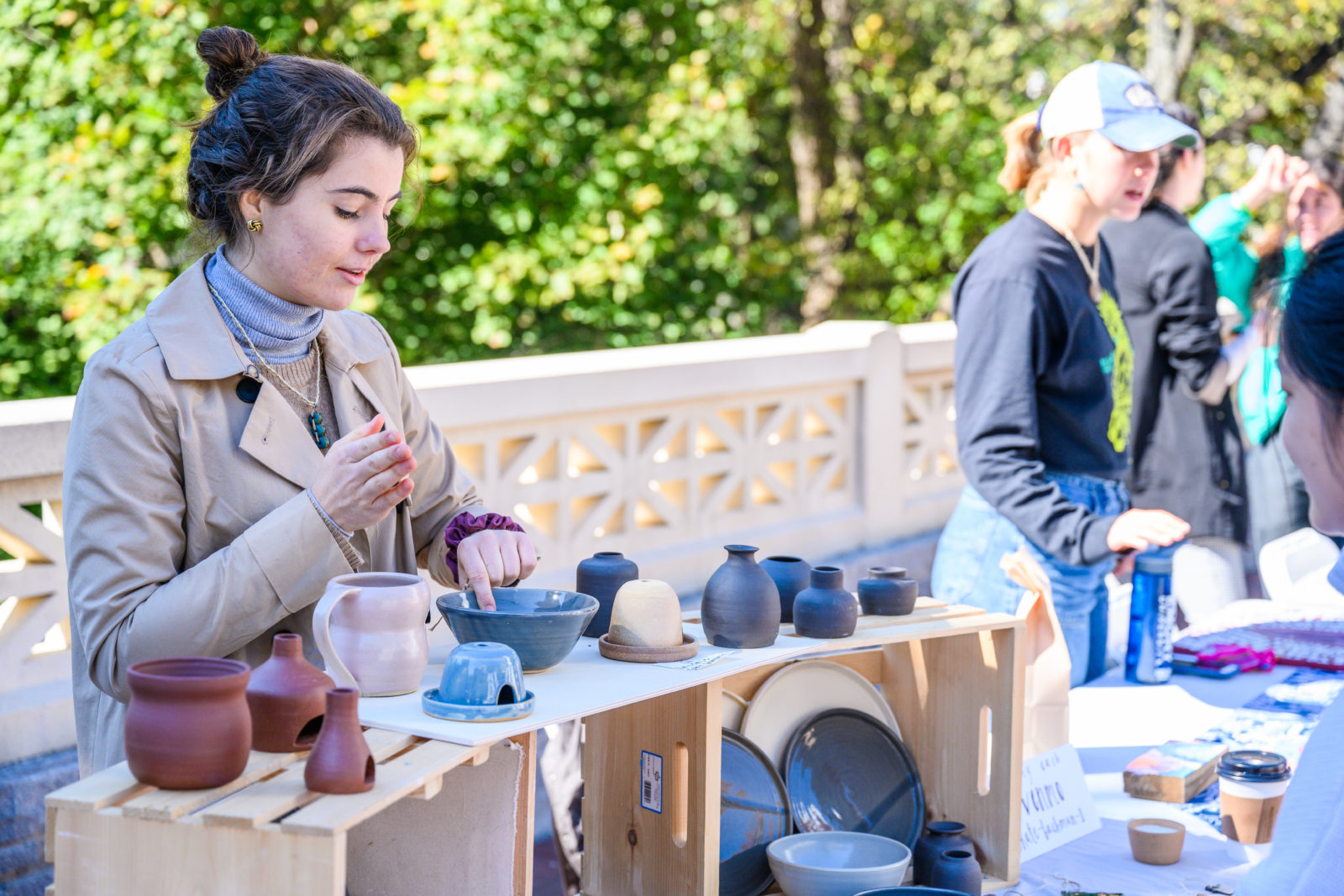 “I wasn’t explicitly looking to buy a candle, and they looked like they were very well done, and the outside of it was very pretty,” Todd Doyle (20C) said.

The peppermint candle and holder was priced at $22, and larger items reached upward of $30.

“[Other student vendors’ prices are] $5. But honestly, I feel like a lot of hard work was put into that,” Doyle said. “At a store, it would be much more.”

Shannon Anderson (19C) discovered her enjoyment for knitting hats when she was finding gifts for friends. Following the first wave of customers that day, Anderson’s stock of winter hats had dwindled down to only kids sizes, and she proudly said that she received her first custom order.

“I have never sold them before. I would [knit] them just to make gifts for friends,” Anderson said. “I might set up an Instagram, but I feel like it’s so hard to sell them online because everyone is doing the same thing.”

A few tables down, an Emory student was getting his face painted to look like Po, the panda from “Kung Fu Panda,” the DreamWorks Animation film released in 2008.

“I’ve done face painting for friends before but not at an event,” Ashling Devins (22C) said. “I did a lot of people’s Pride makeup this year, and I’ve done Halloween face paint.”

As an arts and crafts junkie, Co-President of The Pulse Claire Pomykala (21C) said that she always is looking for ways to produce art. Pomykala referenced the mural outside of Cox Hall, which she helped paint alongside student volunteers, as inspiration for a painted wooden plank. 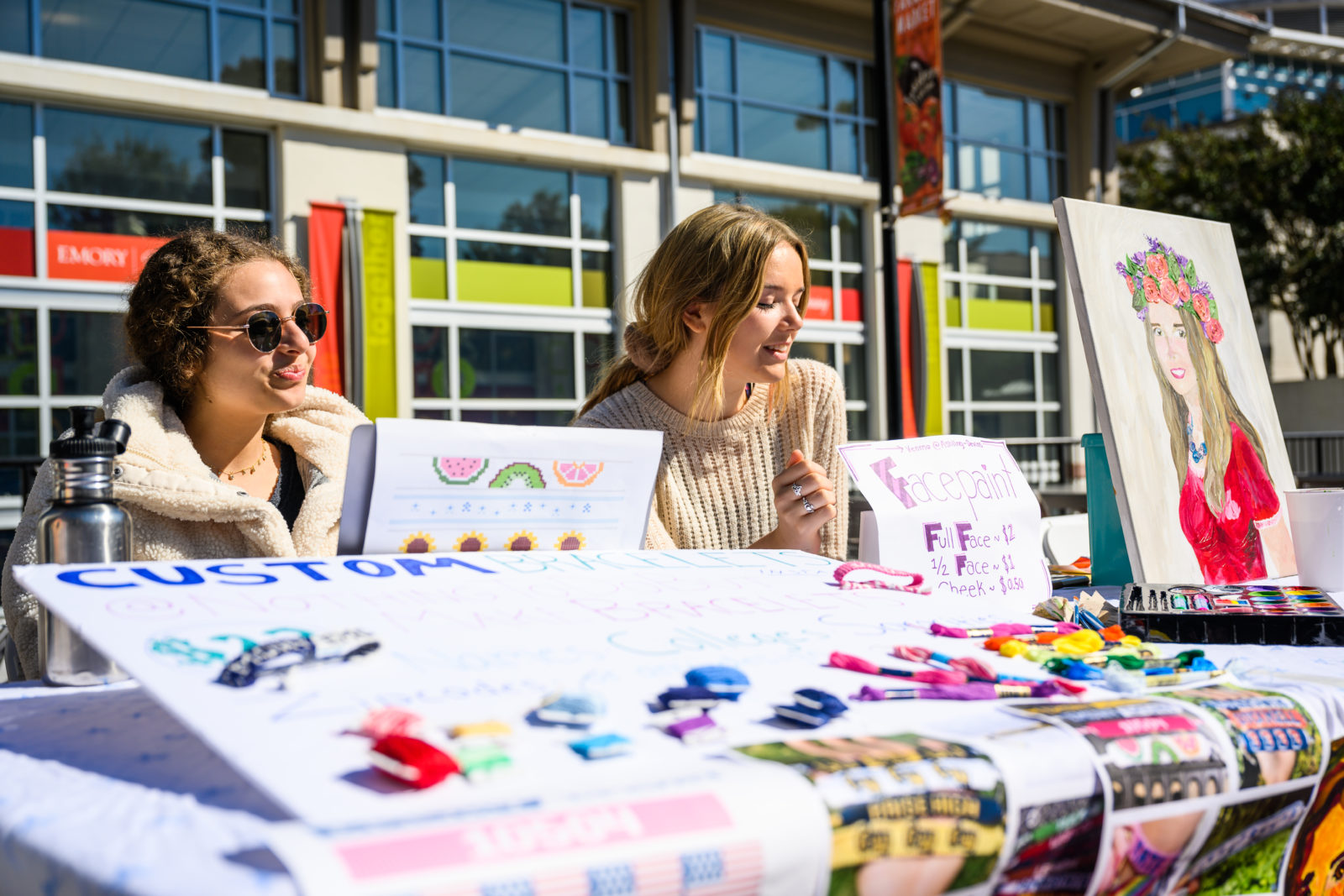 “I wanted to incorporate swirly colors and did not want to pay for a canvas, since I had wood in my garage,” Pomykala said. “So those two things came into one.”

Sarah Abdul-Ghani (23C) said the event served as a marketing platform to grow her already established henna business. As a Hawaiian resident originally from Palestine, she said her work has been featured in a local bridal magazine, and her business is profitable.

As potential clients moved past her table, Abdul-Ghani urged them to consult the design catalogue which brandished traditional patterns along with pop culture references, including an animated dragon and Patrick Star from “SpongeBob SquarePants.”

Abdul-Ghani said henna has picked up in popularity as a testing ground for a tattoo due to its temporary nature. One of her customers, interested in getting a tattoo of an animal, approached Abdul-Ghani for a price estimate.

“On my island [in Hawaii], I made henna a trend,” Abdul-Ghani said. “I got to a point where I could charge $70 to $100 per hour. But now I have to start all over again, and people don’t know how expensive henna is, so I have to be cheaper.”

For Bria Goeller (19C), her career aspiration is to produce and sell her paintings for a living. As a freelance creative who sells art online, Goeller adjusted her prices in accordance to how much a college student would spend. An interested buyer commented on a colorful drawing that depicted a man resting in a banana hammock.

Overall, the event was met with smiles and curiosity during the two hours the students proudly represented their art. Based on the feedback that Choi and Schemankewitz received, they plan to host more Student Artisan Markets in the coming semesters.

“If anything, there is hope that this will keep happening because this is important for students to participate in,” Goeller said.