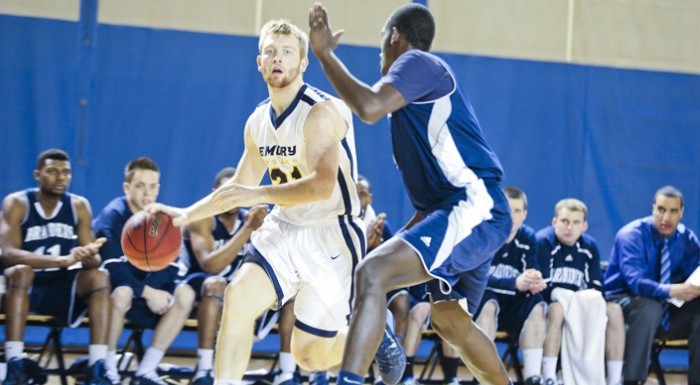 Junior forward Will Trawick dribbles around an opposing player. Trawick brought in 23 and six points in the Eagles wins over Trinity University (Texas) and Washington University in St.Louis (Mo.), respectfully, last weekend. Courtesy of Emory Athletics.

The Emory Eagles had a successful weekend at the Washington University in St. Louis (Mo.) Lopata Classic winning two of two games and bringing their record to 6-1 on the season.

“It’s always good to go away like that. We treat it as a tournament,” Head Coach Jason Zimmerman said. “[There isn’t] a lot of time in between games. [It’s] like a UAA weekend.

“It feels good to go out there after a tough loss and just win a game,” Foster said. “It gave us back our confidence.”

The Eagles also scored 40 percent of its 30 attempted threes, while the Lions scored 38.1 percent of their 21.

“We had a lot of energy, and we were focused.” – senior forward Alex Foster

“I’ve never won on the Wash. U court before,” Foster remarked. “It felt great knowing we could play well there. Hopefully, it’ll translate over to when we play Wash. U later this season.”

Although the Eagles came away with a strong win, Trinity is by no means a weak team.

“Trinity has been in the NCAA Tournament the last three years,” Zimmerman said. “They’re 0-and-something, but their schedule has been ridiculous.”

The Eagles and the Wash. U have a long time rivalry with the Wash. U Bears having the edge so far over Emory. Washington University is nationally ranked third, while Emory is sixth.

On Saturday, the Eagles took on the University of La Verne (Calif.) Leopards, pulling ahead 80-59. Foster once again led the team offensively, scoring 13 points, followed by senior point guard Michael Florin with 12.

“I was really happy with how we played,” Foster said. “We had a lot of energy, and we were focused. We played like we did against Guilford.”

“DaGue really impressed me this weekend,” Foster said. “He’s from St. Louis so his family was at the game. While he was a little off the first game, he really stepped it up in the second. It’s a really great feeling to play well in front of your family.”

The Eagles return to action on Wednesday, Dec. 10 when they travel to Covenant College (Ga.) for their final game of the semester.