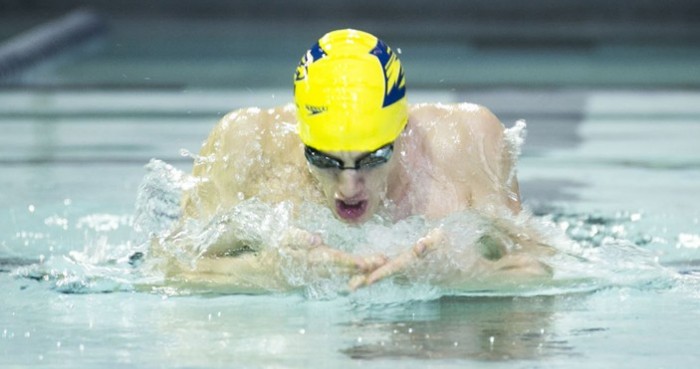 Junior Andrew Wilson glides through the water in a breaststroke race.  Wilson broke national records in the 100 and 200-yard breaststroke races at the Miami University (Ohio) Invitational last week. Courtesy of Emory Athletics.

The star of the invite was junior Andrew Wilson, who led the men’s team by setting Division III records with winning time of 1:57.18 in the 200-yard breaststroke and a of 53.41 in the 100-yard breaststroke. He also broke an Emory school record in the 200-yard individual medley (1:47.59), and gained NCAA “B” cut times as a part of the Eagles’ 400-yard medley relay and 200-yard medley relay teams.

“For me, [the national records] weren’t that big of a deal in terms of moving forward with the rest of the season,” Wilson said. “The goal still remains to get points at the end of the season for NCAAs and just try to get better every day.

Head Coach Jon Howell’s goals were also aimed at the end of the season.

“[Wilson’s record] was not a big surprise, he is a great swimmer and his hard work has paid off,” Howell said. “It was a good meet, but we are still looking forward to next semester and nationals.”

The team of Cooper, Wilson, senior Hayden Baker and freshman Alexander Hardwick came in first place in the 400-yard medley relay with a time of 3:16.70.

Hardwick came in sixth place with a time of 45.51 seconds in the 100-yard freestyle, while Baker and junior John Galvin claimed third and fourth, respectively.

The women came home with 60 NCAA ‘B’ cut times.

In the 100-yard backstroke sophomore Claire Liu claimed first place with a time of 55.28 seconds.

A first-place finish claimed by the team of Liu, Bergh, freshman Julia Wawer and Larson earned a ‘B’ cut time of 3:23.29 in the 400-yard freestyle relay.

In the 200-yard backstroke, freshman Cindy Cheng notched a third place time of 2:00.87.

By the end of the weekend Emory’s two teams had snagged 95 NCAA ‘B’ cuts, two NCAA Division III records and one Emory record.

“Our teams did great across the board. Our focus this time of the year is always to just improve,” Howell said. “This meet gave us the confidence that our work this past semester has paid off, and we are looking forward to working towards Nationals and the end of the season. We had great team performances with strong upperclassmen leadership and are excited for next semester.”

The Eagles are done with their schedule for 2014 and will return after winter break on Friday, Jan. 9 at Florida Southern College.