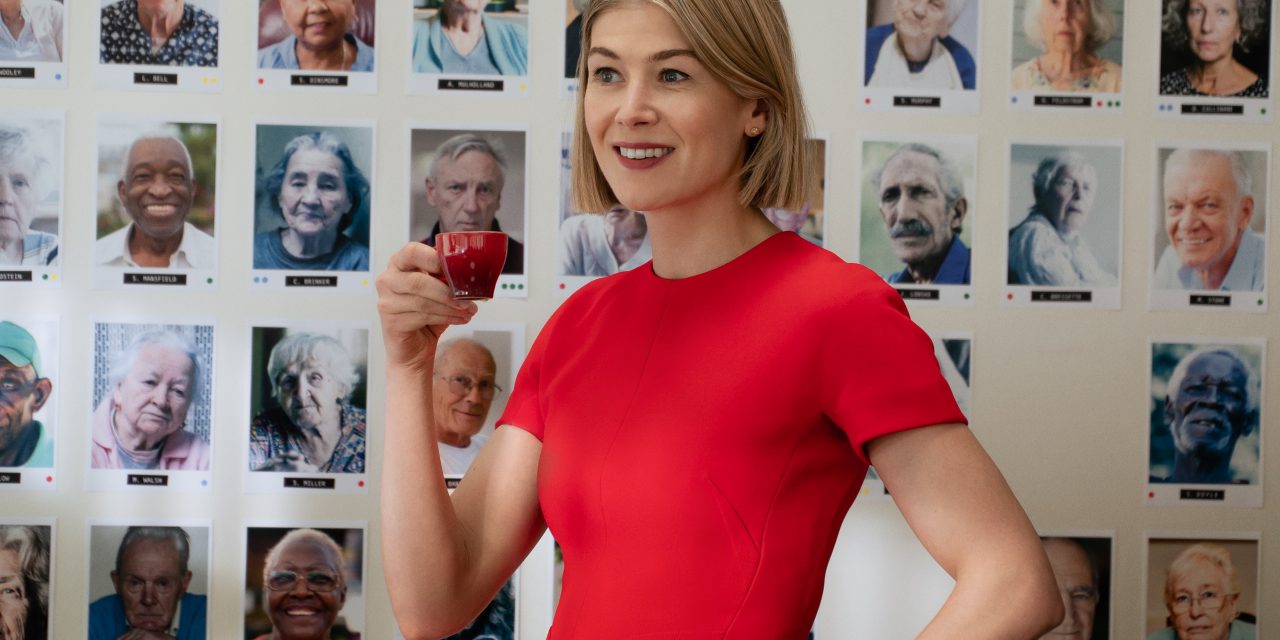 “There’s no such thing as good people.” Among the first lines spoken in the film, this sentiment is front and center in writer-director J Blakeson’s new criminal dark comedy “I Care a Lot” on Netflix. Blakeson never lets you forget this opening stance as he dives deep into a critique of late-stage capitalism and attempts to get the audience to root for the unrootable, sympathize with the un-sympathizable and care about the un-careable, all to wildly differing levels of success.

“I Care a Lot” opens with a compelling con: Marla Grayson (Rosamund Pike) serves as a court-appointed legal guardian to elderly wards whom she claims can no longer live independently. This enables Marla to shove her clients into nursing homes while she drains their assets, sells their houses and controls their visitation rights. Marla holds her elderly prey hostage until their untimely death in the nursing home, after which she picks up another unsuspecting victim and pulls the whole grift all over again.

The central scheme of “I Care a Lot” thrillingly establishes and develops the film’s commentary on late-stage capitalism. The early scenes of the film establish a stark contrast: Marla and her co-conspirators relish in their stolen wealth while their victims pay a heavy toll, suffering forced medications and extreme restrictions. The first act is exciting in its amoral complexities as it forces the audience to confront the con’s human consequences while simultaneously indulging in the high-life the hustlers achieve by taking advantage of helpless seniors.

Pike plays the con artist at the center of the scheme in a standout performance that perfectly captures the callous amorality of the film’s swindle. Marla is a shark with a plastered-on smile, deftly flipping between a sincere surface-level guardian and the cold-blooded capitalist who lurks beneath. Her performance is the engine on which the film runs and relies. 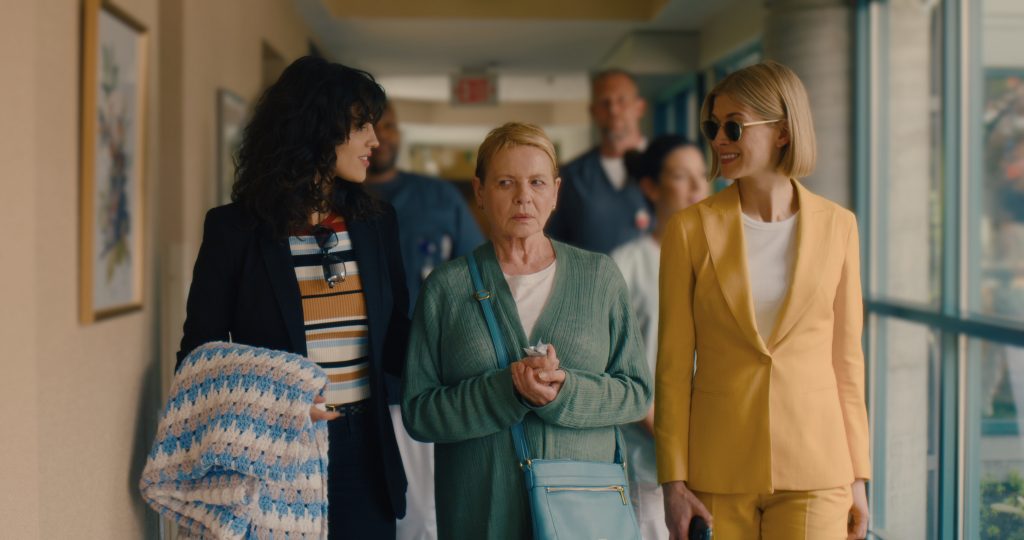 Unfortunately, once the movie’s actual plot kicks in, which involves Marla going up against the Russian mafia after she accidentally cons an elderly woman with a shady past, “I Care a Lot” loses much of what made its central conceit and character engaging in the first place.

Initially, the film is steeped in a murky sense of morality, indulging in Marla’s thrillingly apathetic antics while still balancing portrayals of her actions’ actual consequences. By introducing the mafia, an obviously greater evil, as an antagonist to the inherently corrupt character of Marla Grayson, the film undermines its own characterization of Marla. “I Care a Lot” is forced to simultaneously portray Marla as an underdog trying to outmaneuver a well-oiled operation that is hell-bent on taking her out as well as a callous businessperson who basks in her victims’ suffering. The lack of consistency in the film’s framing of Marla’s actions leads to a passive, detached viewing experience — it’s nearly impossible to be invested in a character that waffles between a complicated anti-hero and an indisputable protagonist.

This inability to become invested in the plot is only heightened by the fact that the film repeatedly denies any substantial complications to Marla’s goals until more than halfway through. “I Care a Lot” does not establish that there’s any possibility for Marla and those close to her to fail in their scheme throughout the first half of the film. This lack of set-up ultimately sabotages “I Care a Lot” for itself later down the line, when the heat begins to rise around the protagonists because of the film’s aggressive insistence that the world bends to whatever is convenient or lucky for the main characters. The film’s overreliance on convenience as a plot device diminishes any chance of a suspenseful experience during pivotal scenes. 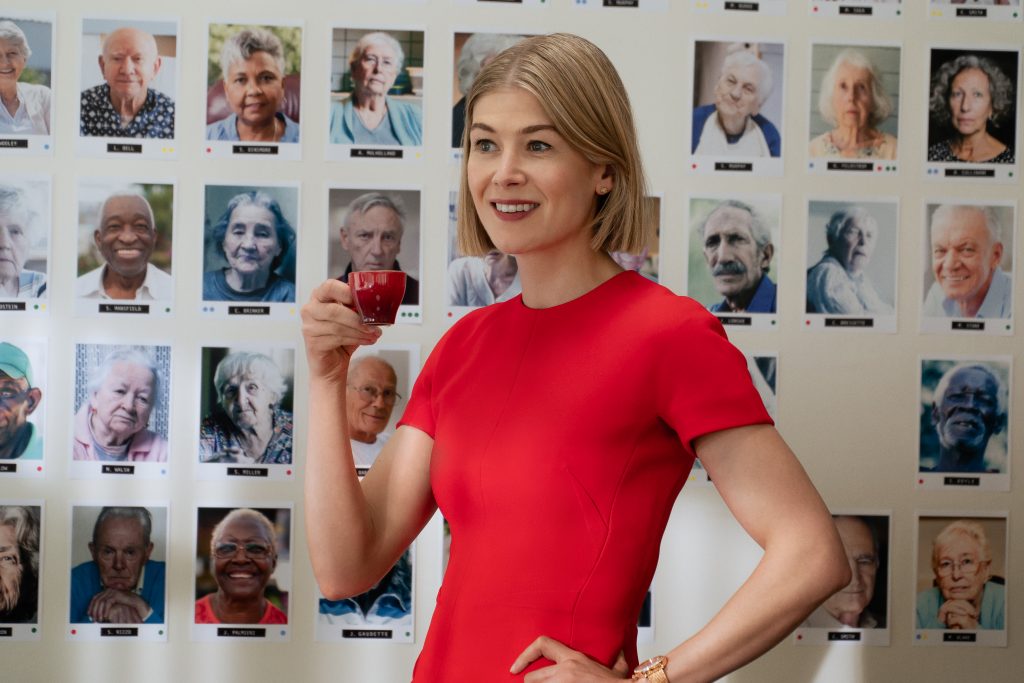 Marla Grayson (Rosamund Pike) stands in front of a wall of senior citizens to whom she serves as legal guardian. (Netflix/Seacia Pavao)

“I Care a Lot” finds its footing again in its ending, which offers an exciting development that returns to the first act’s indulgence in ethical ambiguity and character-driven actions rather than conforming to whatever the plot necessitates. Unfortunately, even this hurts the film, as the ending feels more like a development that should’ve served as the inciting incident following “I Care a Lot”’s first-act instead of the conclusion of Marla’s story. The ending retroactively makes a bulk of the film feel superfluous; acting more like filler to provide content for Netflix than a fully-fleshed out story.

Though “I Care a Lot” features an exciting avenue through which to critique capitalism and a chillingly charismatic performance from Pike, the plot Blakeson chooses to tell with those pieces muddies any intrigue that the film’s successful elements tried to establish. “I Care a Lot” fails to answer a simple but essential question: “Why should I care?”