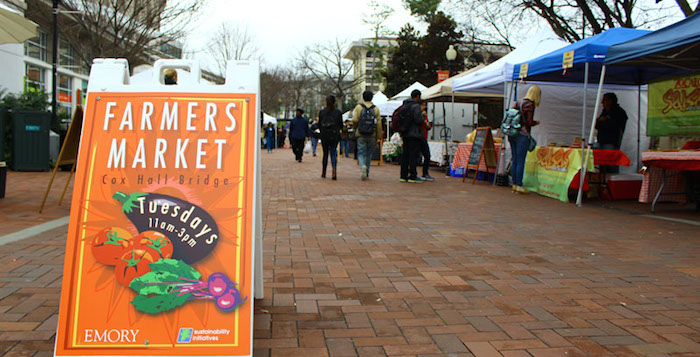 The Tuesday Farmers Market at the Cox Hall Bridge.

According to Program Coordinator of Sustainability Initiatives Emily Cumbie-Drake, there were $42,000 worth of applications, but because of a small budget, they were only able to award $15,420 in funds to 12 recipients. Awards were given individually to faculty, staff and students, but many teams included collaborations between the three groups. Recipients named are the team leaders.

Each application for funding is reviewed by a committee of faculty, staff and students based on relevance of the project to Emory’s Sustainability Vision and on the feasibility, potential impact, innovation and creativity of the proposal. The money awarded to each project ranged from $300 to $2,700.

Assistant Professor in the Department of Rehabilitation Medicine in Emory’s School of Medicine Sarah Blanton and her team were awarded $2,700, the most of any of the recipients, to develop a website for the Emory University Doctor of Physical Therapy Program.

Their project, called “Greening Physical Therapy,” will serve “as a resource center for sustainability and health care information (strategies for greening health care), a forum for sustainable procurement and student exchanges – a venue to share examples of sustainability concepts incorporated into a PT curriculum,” Blanton wrote in an email to the Wheel.

Her hope is that this project will facilitate the incorporation of sustainability initiatives into the educational curricula.

College junior and Vice President of Sustainability of the Food Advisory Committee Emory (FACE) Hannah Dugoni’s plan is to transform the way students at Emory buy groceries through providing students an easy, affordable way to support local Georgia farmers. Through a monthly payment system, which will accept Dooley Dollars, students can pick up a basket filled with various organic foods, such as apples, jam and peanut butter, once a week at the Farmers Market on Tuesdays at Emory.

Dugoni said the money from the fund will be crucial to the success of her initiative.

“It’s really important that we use this money for advertising and to help institutionalize the program,” Dugoni said. “We are also going to use the money to buy reusable, insulated tote bags and also may use the grant money as an incentive to sign up.”

Executive Chef at Emory University Hospital Mike Bacha also worked with the idea of sustainable farming for his project, titled “EUD Seedling Starting and Onsite Composting.” His plan is to implement a vegetable garden while using tumble composters for garden scraps and a hydroponic system to start seedlings for outdoor gardens.

College junior Caroline Plott and her teammates received funding to install a green roof on the Complex – undergraduate housing that comprises Hopkins, Smith and Thomas residence halls – in an attempt to provide a hands-on education tool to address the need for storm water management and to reduce building costs.

College junior Tyler Stern and College sophomore and Oxford SGA Vice President Michelle Tan both submitted projects related to energy saving on Emory’s campus. Stern was awarded $700 dollars to install LED lighting outside the patio area by Few and Evans halls as well as to replace some lights inside Evans with more efficient bulbs. He said he came up with the idea because he felt that the patio would be more welcoming and that residents would utilize it more if it were lit up.

Tan’s plan is to install occupancy sensor switches in the study rooms of Haygood Hall, a residence hall on Oxford’s campus.
College senior and President of Emory Water Coalition Roger Tieu is following through with a project that was funded last year by the Sustainability Incentive Fund. Last year, the Emory Water Coalition utilized the funds awarded to them to install hydration stations around campus. With their success last year, they are now focusing their attention towards public outreach, Tieu wrote in an email to the Wheel.

“We will be focusing on creating appealing educational signage for the hydration stations as well as coordinating several water sustainability events, including a movie night and public demonstrations,” Tieu wrote.

Security Specialist at Robert W. Woodruff Library Kimberlee Tate and her partner Security Manager Terence Jefferson also applied for funding to promote use of sustainable resources here at Emory. Their plan is to produce and print marketing material for Woodruff Library to help promote usage of recycle stations, energy dashboard and hydration stations.

Assistant Research Professor at the Rollins School of Public Health Amy Kirby and her team submitted a proposal to assess the efficacy of the Emory Wastewater Reclamation Facility in removing enteric viruses from water using the WaterHub biological treatment system.

“Dr. Christine Moe and I are primarily interested in enteric viruses, such as norovirus, that cause diarrhea,” Kirby wrote in an email to the Wheel.

She noted that these viruses, due to their small size and stability in the environment, are historically difficult to remove from water by conventional treatment processes. According to Kirby, the new Emory Wastewater Reclamation Facility will remove wastewater from the sewer main draining the Emory campus.

Kirby wrote that she and her team would like to “examine the efficiency of the novel, biological purification system in removing these viruses from the water.” The money awarded to them will be used to fund the viral testing.

College freshman Brad Schupack wrote that he applied for the sustainability grant in order to raise awareness on the current plight of bees in the environment. His group, The Bee School, will use the money from the grant to host a seminar on beekeeping and its benefits.

Other recipients’ projects focused around technology and/or social media.

Rollins Professor Eri Saikawa applied for funds to help transform [email protected] from an academic learning community to an ongoing University-wide initiative which will involve faculty, staff and students.

Launched in January 2014, [email protected] fosters a series of conversations about the status of climate change scholarship, teaching and service at Emory. Their plan is to use the funding mainly for raising awareness, research and for a “Day of Scholarship” in the spring where researchers will share their climate research.

College freshman Mehul Bhagat and his team’s project Paved with Poetry is a collaborative arts project that will be launched later this year. According to Bhagat, their plan is to utilize a social media campaign to increase student awareness of on-campus opportunities in the field of sustainability.

The responses will then be crafted into a community poem that will be engraved along concrete walkways on campus.

“The engraved poem will not only be a monument to reimagine our everyday connection to Emory’s sustainability projects, but it will also function as a kind of marker: a testament to Emory’s commitment to progress and innovation,” Bhagat wrote in an email to the Wheel.