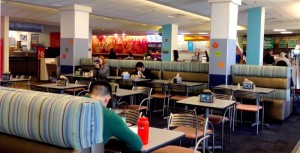 During the academic year, the location will operate from 7 a.m. to 7 p.m., Monday through Friday and 11 a.m. to 6 p.m. on weekends, Director of Campus Dining Chad Sunstein wrote in a July 30 email to the Wheel.

The location will serve the same iced coffee drinks sold at the farmers market, along with an espresso menu and pastries from Atlanta-based H&F Bread Company. According to Sunstein,  the location will offer fair trade coffee and use local dairy products.

Blue Donkey has been a popular coffee vendor at Emory’s Farmers Market and the high demand from students influenced the decision to seek a permanent space, according to Lane.

Lane also noted that Blue Donkey’s experience operating a location at the Georgia Institute of Technology would provide insight into how to manage Emory’s location.

“We have been [at Georgia Tech] for three or four years now, so operationally, in terms of working on a campus, we have experience in terms of staffing, inventory, logistics, handling the volume and fluctuations,” Lane said.

The company is headquartered at its roastery in Fayetteville, Ga., and has a third permanent location at Grant Park. Blue Donkey also serves iced coffee at the Piedmont Park and Peachtree City Farmers Markets.

Co-founders Ed Lane, David Lane and William Rankin opened Blue Donkey after discovering their appreciation for coffee while living overseas, according to the company website.

Mikko Biana (21C) said he would stop at Blue Donkey every week at the farmers market and he welcomed the permanent shop.

“I feel as though Kaldi’s has a monopoly on coffee on Emory’s campus,” Biana said. “So when I heard that Blue Donkey would be opening a location at Cox, I was obviously very happy.”