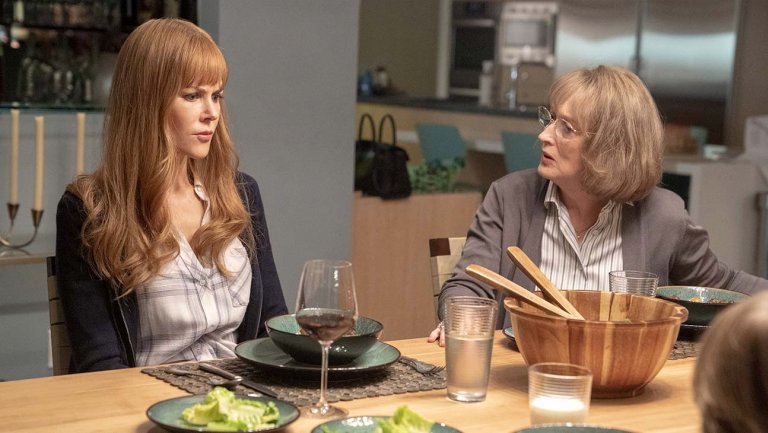 In the final episode of the second season of “Big Little Lies,” Renata (Laura Dern) tears down her stock-gambling and cheating husband’s toy collection and model train set — a moment that marks Renata’s first significant action in several episodes and poses a disappointingly exciting question for me: Will one of this season’s storylines finally produce a significant conclusion? I only had to wait a few minutes for my answer, a resounding “not really.”

The sophomore season of “Big Little Lies” suffers from the same issues that befall many sequels of acclaimed works — it just doesn’t know what to do with characters whose stories have already been told. The season was built on a promising setup, trailing the emotional and legal fallout of the Monterey Five’s murder of Celeste Wright’s (Nicole Kidman) abusive and adultering husband, Perry (Alexander Skarsgård). However, the season falters because it says nothing significant about how the characters cope with traumatic experiences.

This failure is most felt in Jane Chapman (Shailene Woodley), whose second season arc explores her attempt to form a new relationship after her twisted romance with Perry ended in extreme violence, rape and mental scarring in intimacy. Once again, Woodley is fantastic in the part as she heartbreakingly portrays Jane’s inability to open up and embrace another human being due to her past trauma. Unfortunately, Woodley excels where the writing falls flat. The show fumbles its opportunity to explore how people heal from such experiences as no progress is really made until the final episode when Jane inexplicably embraces her romantic interest.

Though Renata’s storyline appears to concern itself with how she deals with her husband’s failures as they backslide into bankruptcy, she doesn’t really end up doing much of anything throughout the season. Renata, who in the previous season was a powerhouse of action and domestic passive-aggression, comes off this season as a passive observer to her own life. Dern slays the role of the hyper-involved, appearance-obsessed PTA-working mom, but the script fails the actress. Despite the season’s focus on how the characters grow from their severe misfortune, Renata’s arc feels like only the first act in a “getting your life back together” story, focusing only on her decline into misery rather than how she may pick herself back up.

Of all the storylines that fail to substantially develop into particular significance, the worst offender is the fallout that follows Ed Mackenzie’s (Adam Scott) revelation of wife Madeline’s (Reese Witherspoon) affair. After an emotionally wrecking scene between Ed and Madeline, during which the truth of her infidelity is brought to attention, the rest of their story stalls. For five whole episodes, Ed remains unresponsive to Madeleine’s pleas of forgiveness until their story reaches an admittedly heartfelt conclusion. However, a solitary sweet moment does not necessitate wading through five hours of repetitive drudgery. Though Witherspoon and Scott both excel at encapsulating the pain and the authenticity of their struggles, the show gives them little to work with, and their story remains little more than a middling domestic drama. Are we starting to see a trend between excellent actors and subpar writing?

The remaining two story arcs of the season, those of Bonnie Carlson (Zoë Kravitz) and Celeste Wright (Kidman), are arguably the strongest of the bunch. Their stories suffer from problems similar to the other three, but see too much, rather than too little, action.

Of the five main actresses in the show, Kravitz received the shortest stick in the first season regarding characterization. All we truly knew about her character was that she hid some trauma of past abuse beneath her serene exterior. This season, she’s been given much more to do, carrying the most guilt for Perry’s death and coping with her abusive mother’s slow demise. Her cool exterior is finally broken as her story picks up steam in the final three episodes, but the revelation is too little too late. The issue rests not with the plotline itself, but rather with how long the show took getting to the core of Bonnie’s story. After a season and a half of shoving Kravitz’s character to the backburner, the explosion of all her pent-up emotional turmoil in a couple — admittedly incredibly acted — episodes left the plotline with yet another case of wasted potential.

Like Bonnie’s, Celeste’s dominant conflict does not emerge until the final three episodes, when her mother-in-law Mary Louise (Meryl Streep) challenges her for the custody of her children. Through courtroom scenes seemingly designed to spite anybody with a basic understanding of legal practices, both actresses receive ample opportunity to showcase why they are among the best in the business as they engage in intensive questioning sessions. Streep is an excellent addition to the cast, as her polite sociopathy and penchant for victim-blaming paints a chilling portrait of a mother blinded by the love for her son. How the pair’s story ends, however, is fairly anticlimactic and seems to almost undermine the season’s entirety.

Most disappointing about this sequel is that it shirks its opportunity to offer anything new, insightful or surprising with its themes and characters in favor of providing its actresses with a series of Emmy-baiting emotional breakdown moments. The actors elevate the material to such a degree that it truly does feel like you’re watching a competently-made show rather than a darker version of some Hallmark channel originals. Rumors speculate that second season director Andrea Arnold lost creative control of the series to the producers and showrunner. Maybe the season would have improved had she had more direction, but, as it stands, “Big Little Lies” remains HBO’s second misfire of a hotly anticipated season this summer.