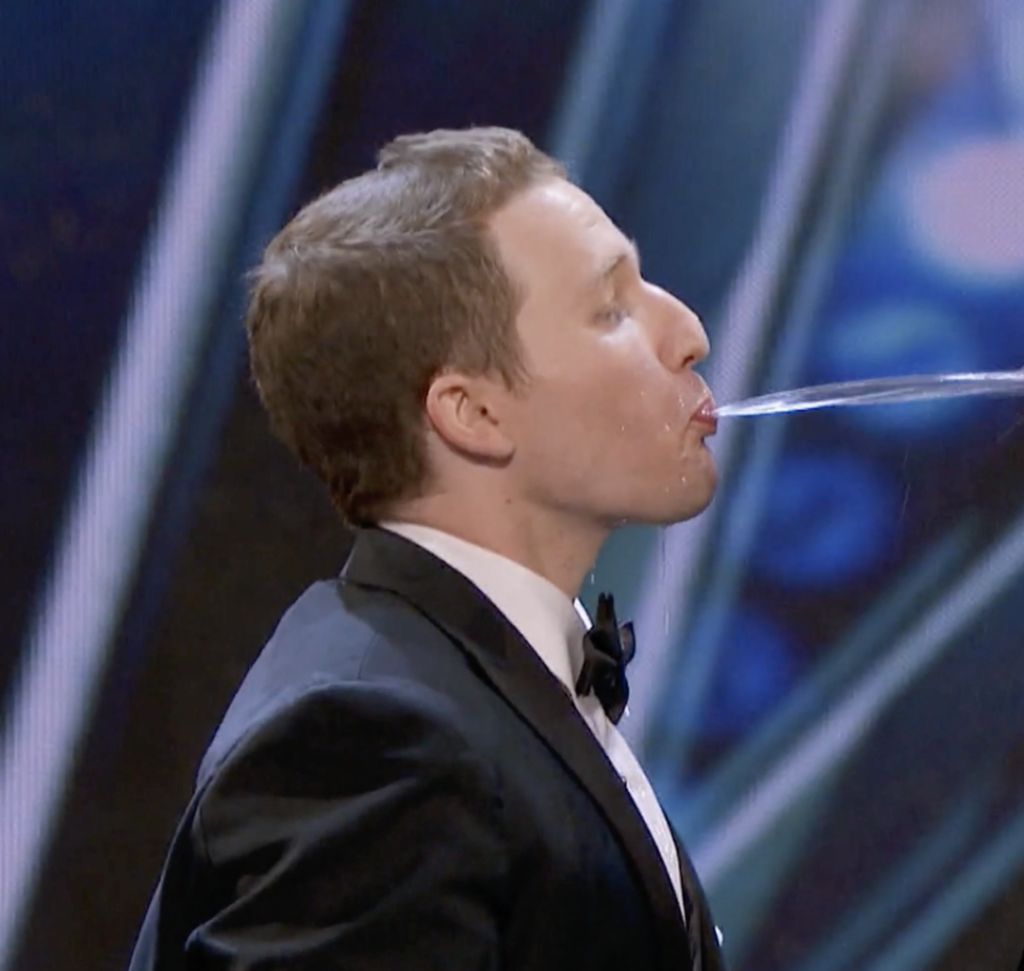 Sam Kaufman (14B) performs with his group, The Human Fountains, on
“America’s Got Talent.”/Photo Courtesy of Sam Kaufman

Spouting water, eggs, juice and other substances into his friends’ mouth in synchronization to music landed Sam Kaufman (14B) on America’s Got Talent (AGT). Since then, Kaufman and the rest of the Human Fountains are currently filming for a Romania-based comedy show based called iUmor.

Kaufman graduated from the Goizueta Business School with marketing and film and media management concentrations. He was also a member of Zeta Beta Tau (ZBT) fraternity and Emory’s student radio WMRE.

“I took an intro to acting class once, but it had nothing to do with [water spouting],” Kaufman said. “It wasn’t until some years later that [the acting techniques] fell in my lap.”

Kaufman discovered his talent for water spouting in high school. Fountain shows were popular at the time, he said, but there were no human fountain shows. Thinking it would be amusing to form a group based on fountain shows, Kaufman shared the idea to his childhood best friends, Ben Tillis, Joel Lowinger, Elan Lefton and Cameron Poter.

“[Kaufman] proposed the idea to our group, and I will admit I was hesitant at first … but once he brought us outside and showed us [his] vision, we couldn’t stop laughing,” Tillis said. “He’s always had the best idea of what it is that makes it funny and captivating.”

After getting over the act’s initial disgust factor, the group did not hold back, as they got numb to firing water into each other’s mouths the more they practiced. The members are all close friends, having attended high school together in Denver. Although Kaufman’s friends needed some convincing to take up the talent, they were more than ready to perform at their senior talent show in 2010, which they won.

“We wanted to leave [high school] with a splash,” said Kaufman. Their AGT performance in 2018 was based off of their high school talent show.

“People loved it, so we taped a nicer version of it … and put it online,” Kaufman said.

That video earned them some publicity within the Reddit community, but it was not until eight years later when they personally posted a video on Reddit that the group went viral. From the video on Reddit, the group was asked to audition for the 13th season of AGT.

“We didn’t really know what the reaction would be,” Kaufman said. “[We thought we would be] one of those goofy acts that gets put on there to quickly get an ‘X’, but we were completely fine with that. We got a standing ovation … and made it through the quarter finals.”

Their endeavor has allowed Kaufman to share his unconventional creativity.

“We’re a group that spits water into each other’s mouths,” said Lowinger, a friend of Kaufman since kindergarten and a member of the Human Fountains. “Can’t get more unified than that. [Kaufman] has always been an incredibly creative person and the success of the group has allowed him to take his creativity to a whole new level.”

Their social media platform has grown immensely since their season of AGT aired, with about 10,000 followers on Instagram. This has not only allowed them to reach a variety of people of different backgrounds and ages, but they have received a lot of positive feedback from the public expressing how much their videos have impacted their lives.

“We have received … a lot of heart-warming messages from people that are sick or having a very bad day and …. they would be shown the video and they would be laughing in pure joy.” Kaufman said. “There is a lot of serious stuff going on in the world and … getting people to see something ridiculous and fun and make them laugh [is our goal].”

Their popularity on AGT has allowed to travel to places like Germany, Japan and Italy to both perform and appear on television shows.

Before Kaufman began this journey, he did not expect to receive so much publicity. Tillis notes that although this experience has created an incredible platform for all of the members, it has also helped Kaufman grow throughout the years.

“[Kaufman] was definitely more introverted in high school,” Tillis said. “ Since the group has been publicized his focus has [changed]. He recognized the opportunity we had once our video went viral. It is because of him we worked so hard on AGT. Because of his motivation, we were able to progress on the show and perform all around the world.”

Kaufman is the chief creative officer and founder of the advertising agency DigiHear, where he works with a variety of clients in increasing their online presence. In the future, he hopes to continue with the Human Fountains and potentially create a television show to showcase their unorthodox talent. He mentioned potential for a show coming together later this year that features several synchronized spouting performances that tell a narrative.

As the Human Fountains become more of a full time job, Kaufman advises students to “enjoy [their] time at Emory because it goes by fast and there is no reason you should not be taking advantage of whatever makes you most happy … and don’t worry about how it is all going to come together.”