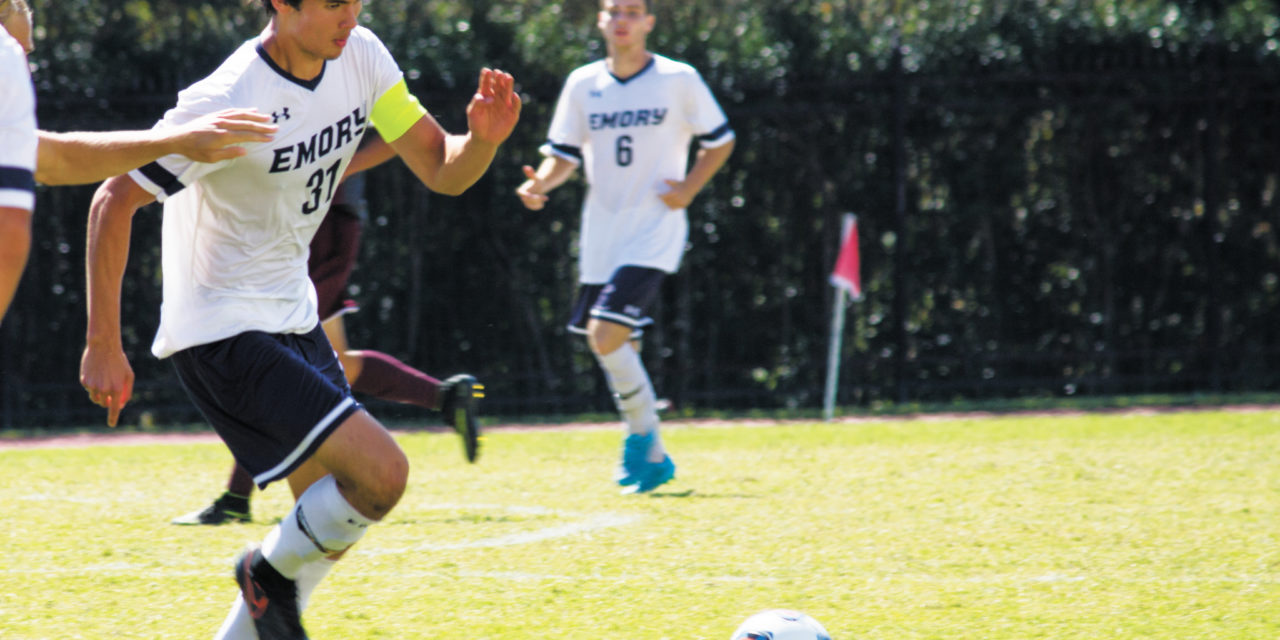 In their first University Athletic Association (UAA) match of the season, the Emory men’s soccer team finished just short of the University of Chicago (Ill.) Maroons, losing 2-0 at home Saturday. UChicago, currently No.3 in the NCAA D-III rankings, improved to 11-0 on the season, while Emory fell to 5-3, ending a three-game win streak.

Taking into consideration both UChicago’s national ranking and Emory’s goal to win a UAA championship, the stakes could not have been higher for this young Emory team in Saturday’s contest.

The tide swung in favor of the Maroons fairly early when, on what looked to be a good cross-pitch release out of Emory’s defensive end, the pass missed its intended target and was intercepted by UChicago senior forward Brenton Desai about five yards outside the box.  Desai took a touch and smashed the ball into the right upper 90 of Emory’s goal. UChicago took the 1-0 lead into halftime.

While Emory had opportunities in the first half, the Eagles who took the pitch to start the second half came out even stronger than before, attacking UChicago from all sides. In just the first minute of the second half, a cross from Emory freshman midfielder William Jones was deflected onto the goal. Unfortunately, UChicago junior goalkeeper Hill Bonin’s chest collided solidly with the ball, collecting the fortunate save.

“In the second half, our game plan was to find [junior forward Jason] McCartney more, and I think we were able to find him and run off of him better in the second, which increased our possession,” Head Coach Sonny Travis said.

To Emory’s dismay, plays like the deflected cross typified the remainder of the second half. Emory was knocking on the door for the entirety of the second half; including a header from McCartney that was inches from crossing the goal line in the 51st minute, a goal called back on a keeper interference violation in the 70th minute, a scrum in front of the goal in the 83rd minute and a one-touch rip off the volley from junior midfielder Gabriel Vasconcelos that was denied by the fingertips of a diving Bonin in the 86th minute.

Junior midfielder Christian Meyer, while disappointed with the score line, was pleased with the team’s efforts.

“I think we were unfortunate not to score any goals,” Meyer said. “We created more chances than UChicago; we just weren’t able to get the ball into the back of the net.”

Despite plenty of opportunities, Emory just couldn’t break through what seemed to be a screen covering the plane of the UChicago goal. The nail in the coffin came from UChicago in the final 30 seconds as UChicago freshman forward Dayo Adeosun managed to put a close-range shot in to seal UChicago’s 2-0 victory.

Despite the unfortunate finish, spirits were high amongst the Eagle squad.

“I think we have known pretty much all year that we have talented players individually and that we could play with pretty much anyone in the country, but this game gives us more confidence and confirms our belief that we can play with anyone,” Meyer said.

For Travis, the steps ahead are simple.

“This group is clicking as a team, and the chemistry is good. We just need to get a little bit better each work, and we will be where we need to be by the end [of the season],” Travis said.

The Eagles’ next UAA match falls on Saturday, Oct. 8, when they travel to St. Louis, Mo., to face off against Washington University in St. Louis (6-0-1).