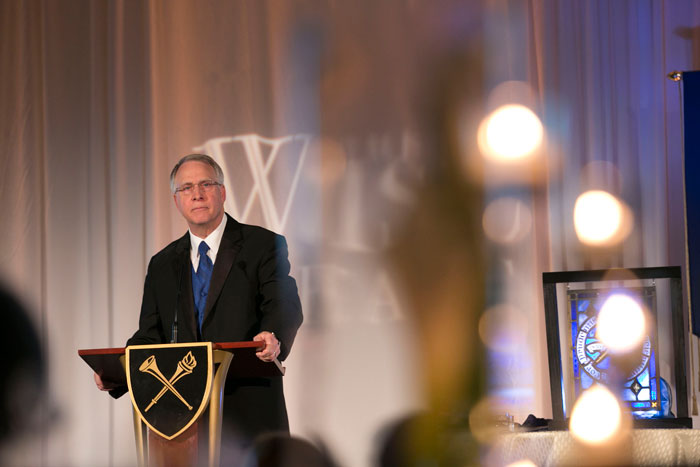 In celebration of Wagner’s 13-year presidency, Emory University honored the retiring president at his farewell gala June 3 at The St. Regis Atlanta, according to a June 2016 University press release.

The Board of Trustees recognized Wagner for his commitment to education and ethical engagement by establishing the James W. Wagner Chair in Ethics, titling Wagner President Emeritus and naming the first-year quadrangle in his honor.

“Fourteen years ago when I was being approached by universities to consider leadership roles, Emory University stood out and still stands out as one with an unusual history and … facility with a vocabulary of values,” President James W. Wagner said, reflecting on his interest in Emory in 2002.

The endowed faculty chair intends to “recruit, retain and reward superior faculty members” and to “enhance the faculty member’s scholarly efforts and/or research program,” according to the University website. Gifts and pledges came from “members of the Board of Trustees, the president’s cabinet and friends of Emory,” according to the release. Donations totaled over $2 million, the minimum amount required to endow the Chair.

“The Board of Trustees wanted to honor President Wagner’s significant accomplishments in his 13 years as president, and ethics has been a hallmark of that tenure,” Senior Vice President for Development and Alumni Relations Susan Cruse wrote to the Wheel. “It was important that this honor encompass and embody President Wagner’s contributions to the entire University.”

Wagner added that the University inspired his focus to extend beyond academics to ethical engagement.

“Emory’s culture has been one where it is appropriate … to evaluate opportunities on their ethical perspective, the right thing to do,” Wagner said. “This has been in Emory’s DNA for a while.”

His vision and leadership in the Emory community has also earned him the title of President Emeritus by the Board of Trustees at the farewell gala. Wagner is the third University president to receive this title, an “honor that is given to him to recognize his longstanding service to Emory,” Vice President and Secretary of the University Allison Dykes said.

“It’s not an automatic designation or automatic honor [for University presidents],” Dykes added. “It is something that has to be voted on by the trustees as a statement of his contribution and his service … [and Wagner has been] an excellent president.”

One major focus of the University during Wagner’s presidency has been campus development, notably the residential communities.

The space between Turman, Hamilton Holmes, Raoul and Longstreet-Means Hall has been named the James W. Wagner Quadrangle, according to the release. The residence halls and living-learning communities were created to unify the residential and academic experiences at Emory, Wagner said.

The quadrangle is a part of the first-year residence halls north of the Dobbs University Center (DUC) that was established in the 2005 Campus Master Plan Update and Strategic Plan – two of many updates and plans that took place during Wagner’s term.

“[The Strategic Plan] had an impact as specific as the development of some of our research and education areas … and as broad as the greater emphasis that we have on sustainability,” Wagner said. “I think generally what we were trying to do was to raise the quality of the contribution of Emory’s academic community over this period, and I think there are several indicators that we made progress.”

Faculty and staff commended Wagner’s impact on the Emory community in “The Wise Heart,” a video tribute to Wagner’s legacy.