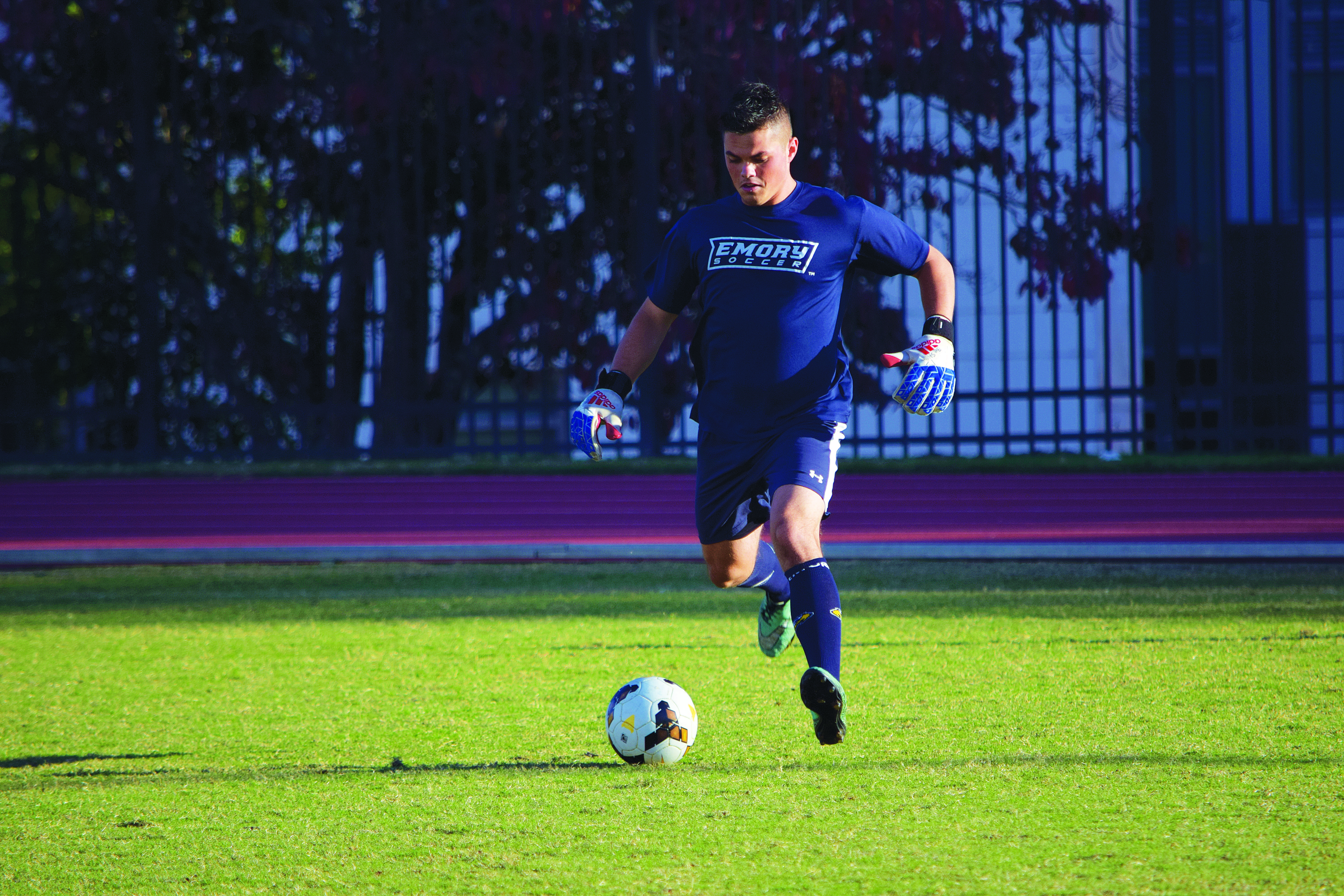 Freshman goalkeeper Cole Gallagher prepares to strike the ball at the Eagles’ practice Oct. 25. The team is preparing for their final three games of the season, all against UAA opponents. Parth Mody/Photo Editor

With this being their last non-conference game of the season, the Eagles were in dire need of a win. A bitter 3-1 loss to Oglethorpe University (Ga.) Oct. 18 was an unwanted setback for the team, potentially tarnishing their season in the eyes of the NCAA selection committee.

“They responded really well, they took it seriously, realized this is our last non-conference game,” Interim Head Coach Cory Greiner said. “They came out with a chip on their shoulder and had a bit of a point to prove.”

Junior defender Aidan Datene scored the first goal, netting the ball in the left corner of the goal in the 20th minute, his second goal of the season, thanks to an assist by senior forward Michael Carragher. The Vikings blocked shots from both Datene and Carragher on two other occasions in the first half, keeping the score tight at 1-0 heading into halftime.

Datene now has two goals and two assists for the season, a notable achievement for a defender.

“We have had a lot of guys step up this year,” senior center midfielder Alex Ferguson said. “[Datene] in particular, coming in big playing on the wing. I’m happy that a lot of people are scoring.”

The second half started with the each team’s defense denying their opponent a goal.

It was not until the 68th minutes that senior forward Jason McCartney scored the Eagles’ second goal off a penalty kick because of a Vikings foul. McCarthy followed it just five minutes later with a third goal assisted by Ferguson and junior defender Evan Floersch.

As a result, McCartney’s goal count has increased to five this season.

Sophomore midfielder Keegan McCombie wrapped up the game with the fourth and final goal with just three minutes remaining.

This game ends the two-game losing streak the Eagles suffered last week at the hands of Brandeis University (Ma.) and Oglethorpe, which was the Eagles’ third loss against a non-conference opponent this season.

“We know what we are going to get from UAA teams,” Ferguson said. “We are always going to fight and battle during those games, and maybe some nonconference games we take it a little bit easier than we should.”

The Eagles go into their last three conference games with a solid 11-4 record. They play the Carnegie Mellon Tartans at Carnegie Mellon University (Pa.) Oct. 27. The Eagles and Tartans have tied every game they played against each other the past four years, according to Greiner. The teams’ meetings in the past two years have included one red card for each team, Greiner said.

“It is kind of a non-traditional rivalry in recent years,” Greiner said. “They are fighting for their life right now, kind of like we are for an NCAA bid. It’s easy to say it’s a crucial game [because] every game is at this point, [but] it is going to be a very important game for us moving forward in terms of UAA standings.”

The Eagles currently rest in a four-way tie atop the UAA standings with a conference 3-1 record. A first-place UAA finish would earn the Eagles an automatic bid to the NCAA championship. Otherwise, the team must put its faith in the selection committee and hope to earn an at-large bid into the tournament.