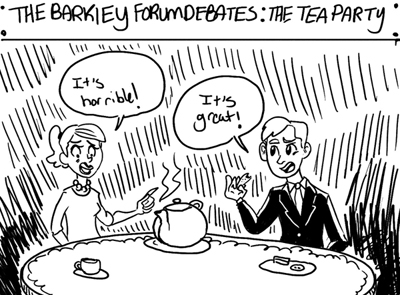 With the most successful third party presidential candidate in US history, Ross Perot, winning a whopping 18 percent of the popular vote in 1992, it goes without saying that outsiders have struggled on America’s bipartisan political battlefield. From the Greens to the Socialists, outsiders have often failed to gain much traction in US politics. That is, until the Tea Party burst on the political scene demanding a reduction in the debt, spending and taxes.

The events of the last month highlight an unprecedented phenomenon in American politics in which a small group of radicals have managed to hold hostage not only House and Senate Democrats, but moderate Republicans who reasonably thought it unwise to make the government’s daily functions contingent on the Tea Party’s radical agenda. On Sept. 20, Republicans in Congress voted 228 to 1 to prevent the nation from paying its bills until the Affordable Care Act (ACA, often referred to as Obamacare) was defunded. Instead of going through normal channels of drafting a bill to repeal the ACA and calling a vote, the Tea Party Caucus conditioned the functioning of the federal government on President Obama capitulating to their demands to roll back Obamacare. There was nothing democratic about the process or its outcome. A small group of legislature held the country hostage in pursuit of their own ideological and parochial agenda.

While third-party movements play an indispensable role in American politics, the Tea Party’s disproportionate influence has become a dangerous political force. Using state-level gerrymandering, the redrawing district lines to give one political party a distinct advantage, the Tea Party has guaranteed that they will have a tremendous amount of influence with few Representatives who have no fear of losing their seat to a Democrat. The fear of attacks from the Right encourages Republican candidates and lawmakers to avoid moderation and compromise. Cooperation is a sign of weakness. Obstinacy is a badge of honor. In a recent Gallup Poll, only 11 percent of Americans were willing to identify as strong supporters of the Tea Party, yet their agenda became America’s only choice during the shutdown deal. A group of legislators representing this small faction were running the country without the support of the vast majority of the citizenry.

The bigger issue is that polarization and confrontation can’t be the foundation for politics. Politics in a country as diverse as the United States demands negotiation and compromise for the government to function and be responsive to the needs of its citizenry. The tea party’s confrontational politics will make government shutdowns the new normal.

We acknowledge that, since their emergence in 2009, the Tea Party has been a great catalyst for discussion and political activism. However, activism is not valuable when it is practiced through scare tactics and crisis politics which preclude compromise. Even the usually conservative Wall Street Journal editorial board has chastised the Tea Party for their confrontational tactics. They argue that it is one thing to adamantly forward political issues in congress for the betterment of the nation, but “it’s something else entirely to sabotage any plan with a chance of succeeding and pretend to have leverage that exists only in the world of townhall applause lines and fundraising letters.”

According to the economists, the result of that sabotage is a loss of $3.1 billion in GDP, and that’s not accounting for the effects of decreased investor confidence, which economists are even more pessimistic about. The notion that the Tea Party is good for the economy seems down right ludicrous when one understands just how destructive their confrontational politics are.

Moreover, the use of racial slurs, bullying tactics and belligerence is no longer just taking place at Tea Party rallies. These tactics are being used on the floor in Congress, where ad hominem attacks and ruthless threats set the stage for what reasoned civic discourse now looks like. A simple glance at the Tea Party’s website can provide insights into their strategy for creating change. With bolded fonts encouraging visitors to “IMPEACH OBAMA” and “BLITZ WASHINGTON,” the Tea Party’s intent is clear. They’re not in Washington to make friends, and they’re not there to find compromise. The Tea Party’s only objective is to “break down the system,” and as last month’s budget debates prove, they are doing just that.