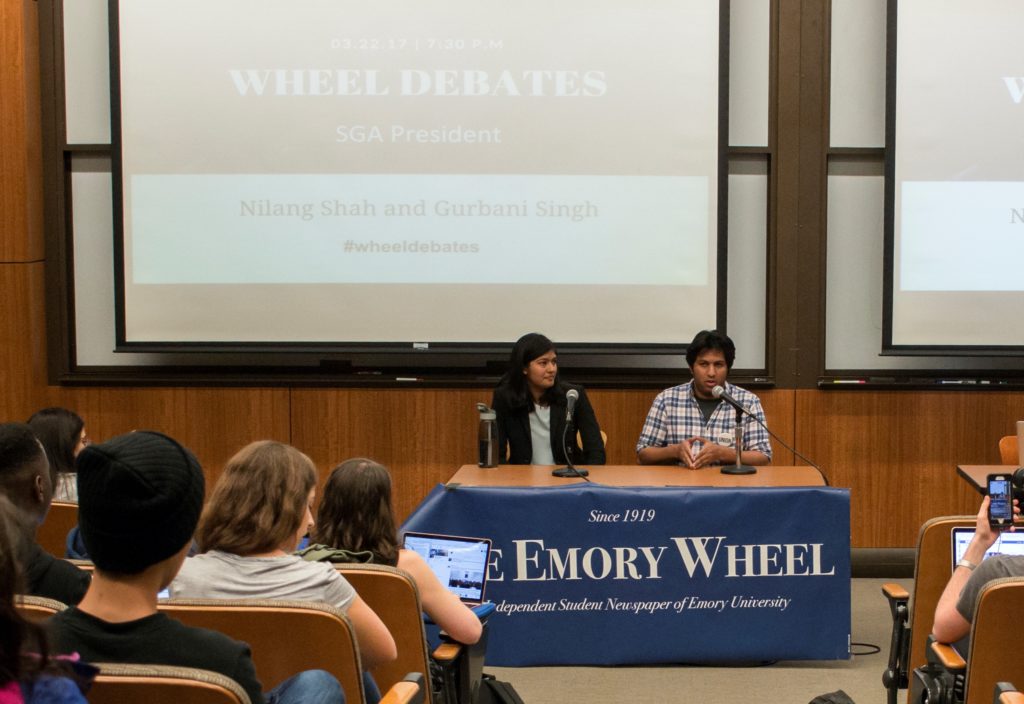 Six student government candidates discussed their election platforms and answered questions from Emory community members via Twitter, The Emory Wheel, and Wheel Editorial Board in this year’s Wheel debates March 22 in the Psychology and Associated Sciences (PAIS) building.

Shah rooted his platform in his perspective as an SGA outsider.

“Right now, I’ll be completely honest, I don’t necessarily understand the full extent of the split,” Shah said when asked how he would help SGA transition since the split.

Shah credited his lack of understanding to outdated minutes on SGA’s website and clarified that though he “has absolutely no SGA experience,” his experience as a teaching assistant for about 600 students has been valuable.

When asked why students should trust Singh, the current SGA executive vice president, after serving on an executive body that has violated its constitution twice in six months, she stated she had “no problem” admitting that SGA had made a mistake.

“I think there are a lot of reasons why things like that happen, and it’s not leaders being dishonest or wanting to move things forward. That’s not the case,” Singh said. “There are many other aspects at play, and there were in those two instances.”

Singh added that she hopes to engage more students in the governing process, reach out to campus organizations and maintain a transparent relationship with GSGA.

CC Vice President Cassidy Schwartz (18C), who is running unopposed for CC president, said that she hopes to revamp CC policies rather than accepting them based on precedent.

“If we don’t have a clear reason why we’re doing things that way, it’s time to rethink that facet of what we do,” Schwartz said. “It’s time to rethink part of the monetary policy .. [by] increasing access to funding and … not hindering [clubs] in meeting their goals.”

Schwartz based her campaign on the introduction of CC’s monetary override program, which organizations could use for emergency funding determined through a case-by-case basis.

SGA executive vice presidential candidate Natasha Armstrong (18B), running jointly with Singh, based her platform on increasing student autonomy and empowerment in four areas: academics, dining, Greek life and safety and transportation. When asked why parts of her platform were lifted verbatim from Singh’s, she said it was a conscious decision made by both of them.

CC vice presidential candidate Naman Jain (18C) similarly based his platform on listening to the requests of College students. Citing his experience with finance through his positions of assistant vice president of finance last year and budget committee chair this year, Jain explained that one of CC’s biggest issues involves a lack of transparency, accessibility and representation in meetings — concerns he hopes to address if elected CC vice president.

SGA President Max Zoberman (17C) attended the debates as they are “the first and only time the election season that candidates get to see each other face to face and hear each other’s platforms from each other’s mouths,” he said.

“This debate in particular was a bit surreal because … everything is kind of colored by the echo of the split,” Zoberman added. “I think this was a historic debate for that reason, but I think that there were really telling moments throughout the debate for all candidates.” In response to the SGA presidential debate, current SGA President Max Zoberman (17C) said he was interested in the plans Singh had proposed and expressed reservations about Shah as an outsider.

Parisa Keshavarz-Joud (18C), who attended the debates and supports Shah, disagreed with Zoberman, criticizing the “closed” culture of SGA, which could use a fresh perspective to open dialogue.

“I think SGA could be more involved in communicating with students,” Keshavarz-Joud (18C) said. “There could be weekly emails or events to get feedback from students.”

The voting period for candidates begins March 28 at 8 p.m. and lasts until March 31 at 8 p.m. Neufeld won the GSGA presidency with 351 votes in his favor and 23 votes of no confidence.