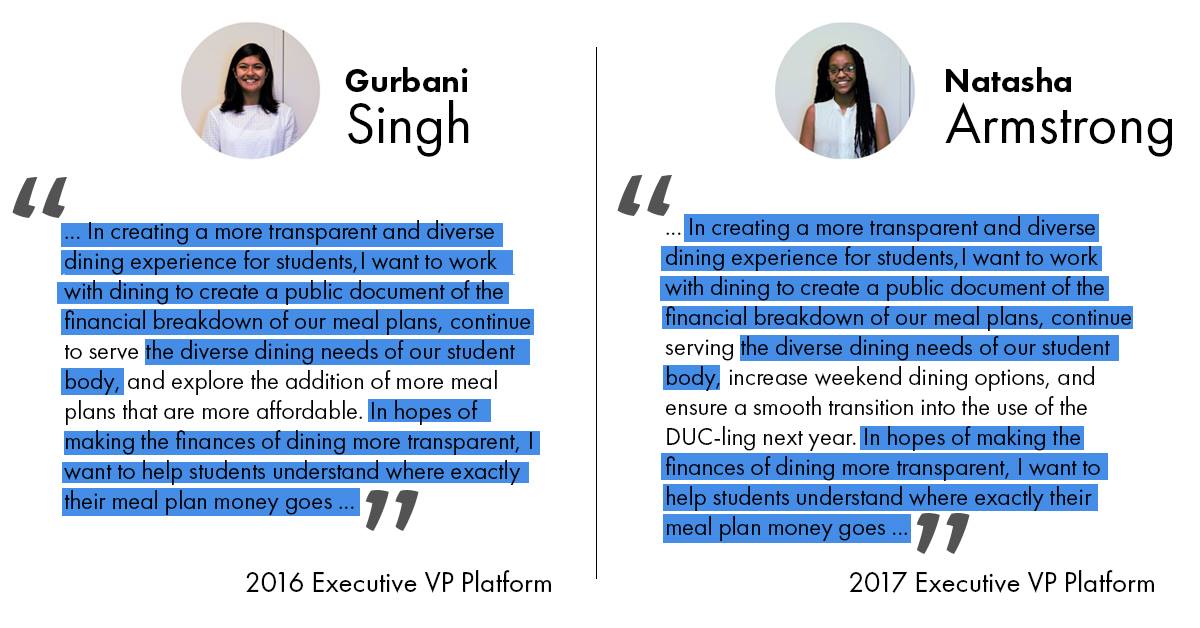 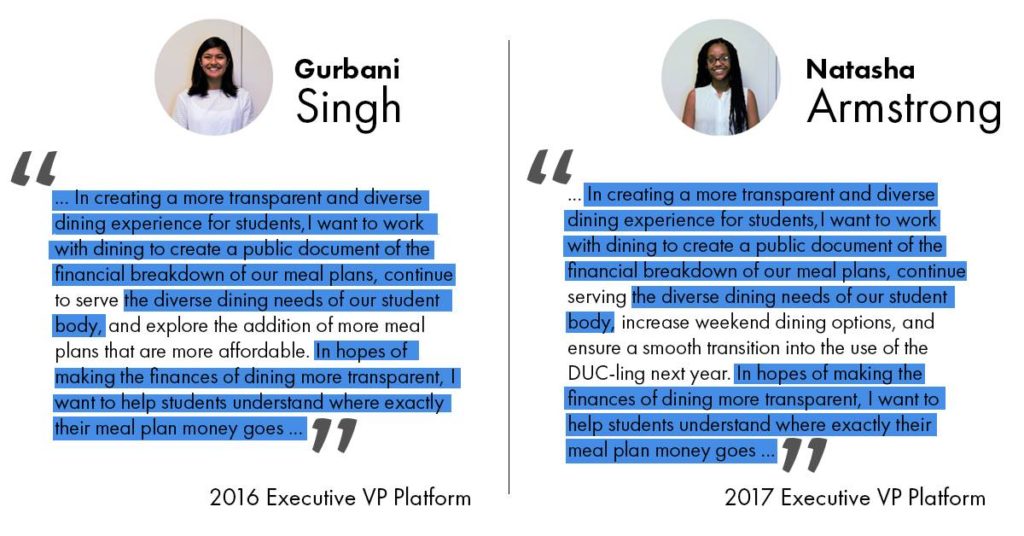 UPDATE (3/24 at 8:11 p.m.): Scroll down for the original article. As of March 24 at 4:30 p.m., an attribution appeared on Student Government Association (SGA) executive vice presidential candidate Natasha Armstrong’s (18B) campaign platform stating that proposed initiatives for safety and transportation, dining and academics are continued from those that SGA presidential candidate Gurbani Singh (18B) proposed in 2016 in her 2016 candidate platform for SGA executive vice president.

Despite the similarities between the platforms, both Singh and Armstrong denied that plagiarism occurred, stating they developed their platforms together.

According to Emory College’s Honor Code website, “Plagiarism is the use of someone else’s words, ideas or work without providing proper credit. Whether the act is intentional or not, the Honor Council considers any form of plagiarism to be a violation of the Honor Code.” Armstrong did not attribute the copied portions from Singh’s 2016 platform to Singh.

The Wheel downloaded copies of Singh’s 2016 platform and Armstrong’s 2017 platform as of March 23 at 4:30 p.m. The highlighted portions appear verbatim in both documents.

In years past, the SGA presidential and executive vice presidential candidates ran independently, but SGA amended its Elections Code in 2015 to allow presidential and vice presidential candidates to campaign with running mates starting in 2016. Elections Board Chair Betty Zhang (20C) said the Board is evaluating the technological feasibility of implementing a two-candidate ticket voting system. Singh and Armstrong are campaigning together and have said they’re running on a party ticket.   “I drafted the platform,” Armstrong said of her 2017 platform, adding that “a lot of it does come verbatim from Gurbani [Singh]’s platform last year and that’s because those initiatives were not seen through … [and] are things that still need to happen.” Singh said that she gave Armstrong permission to use portions of her 2016 campaign platform, and that she was always aware that parts of her platform would appear in Armstrong’s platform. Armstrong said she does not believe her actions constituted plagiarism, stating, “It’s more so plagiarism if I went in and took it straight from Gurbani [Singh] and didn’t discuss it with her.” “You’ll see that a lot of initiatives were carried over from her platform,” Armstrong said. “But to call it plagiarism is taking it a little far, but I don’t know.” Singh echoed her running mate. “Not at all,” Singh said when the Wheel asked if she considered Armstrong’s platform plagiarism. “That honestly never popped into my mind especially because we did [the platforms] together.” SGA elections are governed by the University Elections Code, and SGA campaigns are governed through the Code’s Campaign Option 3. According to the University Elections Code Article 3, Section 2 (J), “All campaigning shall be subject to university policy, Conduct Code and Honor Code guidelines and/or restrictions.” A candidate’s campaign may be challenged on the grounds of “any University or Divisional Conduct or Honor Code” by any voting-eligible student, who can bring a case before the Elections Board, according to Part VII, Article 1 of the University Elections Code. According to Zhang, the Elections Board uses the definition of “plagiarism” in the Emory College Honor Code. If a candidate plagiarized his or her platform, the candidate would violate the Elections Code, Zhang said. If the candidate is running on a party ticket, any penalty issued by the Board could affect both candidates on the ticket, Zhang said. Should a violation occur, the Elections Board may issue penalties including one or a combination of: a fine, the removal of the candidate from the election, a new election or the referral of the case to another council such as the Honor Council, according to the University Elections Code. Armstrong, who is currently SGA representative-at-large, is running unopposed for SGA executive vice president. Singh is running against Nilang Shah (18C) for the position of SGA president. The SGA voting period begins March 28 at 8 p.m. and closes March 31 at 8 p.m. Correction (3/24 at 11:20 p.m.): The article incorrectly stated that Singh and Armstrong were unofficial running mates. Zhang confirmed that they are official running mates. Correction (3/24 at 10:40 a.m.): The headline was initially “SGA VP Candidate Lifts Verbatim Singh’s 2016 Platform.” It has been updated to reflect that Armstrong only lifted parts of Singh’s 2016 platform.