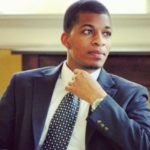 Recent Emory graduate Edward Cortez Adams (17L), a newly minted corporate law attorney with a penchant for books and helping others, died Sept. 25, according to a Sept. 29 email to Law School staff members sent on behalf of Interim Dean James B. Hughes. He was 25 years old.

The cause of death was a self-inflicted gunshot wound, according to his mother Jen Adams. Cortez Adams had no history of mental illness or alcohol abuse, Jen Adams said.

Cortez Adams had started working as an associate at Lowenstein Sandler in New York in September 2017, according to his LinkedIn. His profile on the company’s website was removed as of Sept. 28.

At Emory, Cortez Adams served as notes and comments editor for the “Emory Bankruptcy Developments Journal,” treasurer for the Emory Law Student Bar Association, the first-year representative for the Black Law Student Association and a member of the transactional law competition team, according to his LinkedIn. He earned his undergraduate degree in public policy and English from the University of Mississippi.

From a young age, Cortez Adams delighted in flipping page after page of books.

“I filled his room with what seemed to be like a mini library,” Jen Adams said, noting that his love for learning and reading allowed him to excel in academics.

Although Jen Adams said that her son prioritized school work, Cortez Adams also made sure to dedicate his time to helping others, whether it be through mentoring students, explaining homework problems or participating in his undergraduate fraternity’s outreach events.

“I want people to know that he was a brilliant person … and being around him pushed you to want to do more,” Stovall said. “He had so much love in him.”

And when Cortez Adams’ little sister was born, “he was so ready to be a big brother,” Jen Adams said. He would ask to help change her diapers and he taught her how to tie her shoes for the first time.

Hughes called Cortez Adams a vibrant member of the Emory Law community in his email.

“His death is a sad loss felt deeply by many of us, and I extend my condolences to all who are affected,” Hughes wrote.

When Ann Sweezer met Cortez Adams in high school, she said he was “down-to-earth” with a “bubbly personality.” She remembered him as always at the top of his class and an active participant in several academic groups in school.

His mother started a GoFundMe page to assist with the funeral expenses and transporting his belongings from New Jersey to Tennessee. Although her goal was $10,000, the mother of three has raised more than $19,000.

The funeral was held Oct. 1 at Holy Temple Baptist Church in Memphis, Tenn.