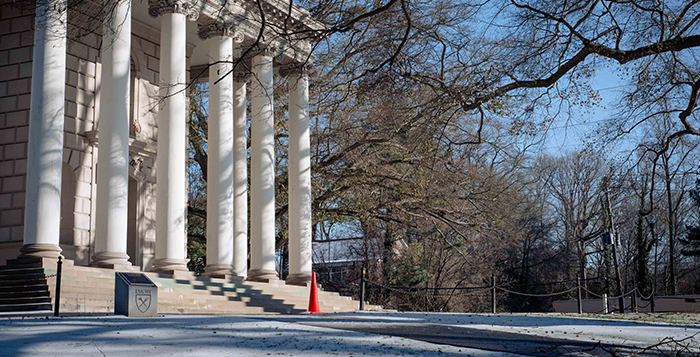 Multiple Emory leaders, including University President Claire E. Sterk, have condemned a controversial decision by the General Conference of the United Methodist Church to uphold the Church’s ban on same-sex marriage and gay clergy members.

Delegates from dozens of countries met in St. Louis from Feb. 23 to 26 for the conference, which ultimately voted for the “Traditionalist Plan” over the “One Church Plan.” The “One Church Plan” would have allowed churches to perform same-sex marriages and gay clergy. The conference is the only meeting where church policy can be changed, so the policy will continue until at least 2020.

Sterk wrote that she “passionately disagree[s]” with the vote in a Feb. 26 all-Emory email.

“As a woman, as an educator, and as the leader of one of the world’s great academic institutions, I cannot be silent on issues of equality and inclusion,” Sterk wrote. “I ask that together we stand behind all people seeking to better their lives along with those who speak out for equal rights for everyone in our society at large.”

Anne Burkholder, Emory associate dean of Methodist studies and professor in the practice of ecclesiology and church leadership, attended the conference with 28 students from the Candler School of Theology. One faculty member and three students were delegates, she said.

The New York Times reported that a divide among church members is imminent, and some are deliberating an alliance among U.S. churches supporting LGBTQ rights.

“Major seminaries at universities like Emory and Duke, which have supported their gay, lesbian, and transgender students, risk losing grants and funding from more influential, and conservative, churches,” according to the Times.
Lisa Garvin, Kevin Crawford and Lynn Pace, Emory’s Methodist heads of spiritual life, published a Feb. 27 open letter on Facebook, saying that they would become “more active forces for justice in the Church.”

“We have participated in systematic oppression through our compliance with the Church’s unjust policies, even as we have advocated for a fully inclusive church.”

Acting Dean of the Chapel and Spiritual Life Lisa Garvin recommended that students interpret Emory’s religious affiliation in a respectful way that “offers compassion to ALL who are hurting, makes a place at the table for ALL voices and advocates boldly for the inclusion of LGBTQ people.”

Director of Emory’s Office of LGBT Life Danielle Bruce-Steele said the University’s association with the Church does not mean Emory also disapproves of LGBTQ marriage policies.

“This vote is antithetical to the work and beliefs of our partners in the Office of Spiritual and Religious Life who continuously fight for justice of LGBTQ people and other marginalized voices,” Bruce-Steele said.

“I think Sterk was beyond right to issue her statement,” Bell said. “We may have a history with the Methodist Church, but their politics are separate from our ideals. I feel that Sterk is upholding Christian ideals much more than United Methodist Church [is].”

Marc Guasch (20C) said he agrees with campus leaders that the “wrong and retrogressive” vote does not reflect campus values, noting that the student body has an “extremely supporting and caring culture around LGBT issues.”