At least one Rollins Student Government Association (RSGA) member and one Rollins School of Public Health student have called for debates to be held before the upcoming RSGA presidential elections, alleging that the RSGA president is abusing power in deciding to not hold debates for fear of stressing students.

In a span of three days, current RSGA Department of Health Policy and Management Representative Christopher DeVore (18PH) and Sana Charania (13Ox, 16C, 18PH) went from disagreeing with RSGA President Tina Mensa-Kwao (18PH) on a Facebook comment thread over the status of a presidential debate, to announcing their own event, only to be forced to reschedule by one week following an announced change in the RSGA election timeline. While the pair alleges that the change was made in retaliation to their unsanctioned debate, RSGA Vice President Serena Durrani (18PH) said the move happened before RSGA was made aware of the debate in the first place.

DeVore said that there was “no widespread objection” when he suggested hosting a RSGA presidential debate at a Sept. 28 RSGA council meeting. But in a comment thread on the “Rollins School of Public Health, Class of 2019” Facebook group, Mensa-Kwao responded to a student asking if a debate would be held with “No. Don’t want to put stress on students!”

Mensa-Kwao wrote on Facebook that the issue should be discussed further with the entire RSGA board at its next meeting Oct. 26. But DeVore and Charania, another student who wanted to have a debate, decided to plan their own privately hosted, RSGA-unsanctioned debate as the next RSGA council meeting would occur during the campaign season, making it too late to put debate plans in motion.

“We decided to host this event on our own without any support or funding because if we were to wait until Thursday [Oct. 26] for the council to have their meeting to discuss whether to have the debate or not, we would be well into the campaigning process,” DeVore said.

DeVore said that he believes that a debate would allow voters to assess the qualities of a leader as well as provide an opportunity for candidates to answer questions regarding their platforms.

“[Watching candidates debate] ensures voters … have an individual who is prepared to represent us to other student organizations and public officials,” DeVore said. “If they can’t speak to us, their peers, how can we trust they are able to represent us to the dean of the school and any other external partners?”

DeVore and Charania announced Oct. 20 via a Facebook event that they scheduled the debate for Oct. 25. DeVore said that their timeline would give candidates a two-day window between the debate and the announcement of their candidacy Oct. 23 to decide whether to participate in the event.

Durrani, who is spearheading the elections process, said that no formal motion was brought forward to RSGA to host or sponsor a debate, nor was a request made for funds.

“While a debate was discussed at a Sept. 28 meeting as part of a broader discussion on how to get students involved in RSGA elections … nobody from RSGA or outside of RSGA brought a proposal to create this event,” Durrani said.

On Oct. 21, RSGA moved the deadline for platform submissions, the first step to declaring candidacy, to Oct. 25 at 5 p.m., the same day of the debate. RSGA approved the change Oct. 19 to allow more time for students to submit their platforms and allow for more interest meetings to be held Oct. 23 and 24, according to Durrani.

Charania said she believes the change is a move to stop the debate from happening.

“We announced our debate and had everything scheduled, we booked the faculty member who agreed to moderate and coincidentally right after that, there was a new election schedule that was put up,” Charania said. “I personally do believe that it was in response to our debate.”

DeVore agreed that the schedule change “looks like an attempt to block us from having this debate in the first place because the president is so against it.”

Durrani said she was not made aware of the debate until the day after the vote to change the election timeline, Oct. 20.

“[The debate] was something that RSGA as a whole wasn’t aware of, and it wasn’t something that I, as the person who is coordinating elections and putting out these timelines was aware of at the time until I was provided me with screenshots,” Durrani said. “That was after we already voted to extend the election timeline.”

Durrani said that she reached out to DeVore and Charania when she realized their debate needed to be postponed so it could take place during the election season.

“I reached out to the organizers and … requested that they postpone their debate to a different day [and] that they consider collaborating so I could have put them on graphics [relating to the election] and known to alert them right after the vote to extend the timeline,” Durrani said. “As a student at RSPH and a member of RSGA, they are more than able to and have the knowledge of the process of bring up possible events and collaborations or funding and advertising requests [to RSGA].”

Charania and DeVore have rescheduled the debate to Oct. 30 at the Claudia Nance Rollins Building auditorium. The Association of Black Public Health Students, Students for Social Justice, the Emory University Barkley Forum and Rollins Latinx Alianza are sponsoring the debate, according to the Facebook event page.

RSGA sent an email to all Rollins students the afternoon of Oct. 24 that included the 2019 rules for campaigning and a statement serving to clarify rules surrounding the election process and debates.

“RSGA (Executive or Legislative Board) has not taken a position on the matter of the debate. No motions were made to host or sponsor a debate; therefore, RSGA has no formal plans to host a presidential debate. RSGA was not asked to sponsor, co-host, or be involved with the ‘RSPH Presidential Debate,’” the statement reads. “Organizers of the ‘RSPH Presidential Debate’ were advised to communicate with the RSGA Council to discuss an ideal date for a debate to avoid scheduling conflicts. The organizers were also invited to propose co-sponsorship, request funds, or request for RSGA to host a debate during RSGA Legislative meetings.”

The statement also stated that students who participated in an Oct. 25 debate would be in violation of campaigning rules. However, Durrani said that candidates are free to participate in the rescheduled debate Oct. 30.

Charania called on Mensa-Kwao to resign from her position in an Oct. 23 interview with the Wheel.

“It’s one thing for the president to decide that RSGA will not hold a debate this year. It is however unreasonable for her to try to prevent anyone else from engaging in open discourse,” Charania said. “After witnessing this abuse of power, I am calling for Tina to resign as president of RSGA.”

Durrani characterized the dispute as a “miscommunication” and expressed regret at having to ask Charania and DeVore to reschedule their event.

“I don’t want to ask people to postpone events when they’ve already invited people, when they already put in the effort to get people to moderate. They probably reached out to possible candidates,” Durrani said. “It would’ve been a lot easier to know ahead of time so that I could coordinate with them to create this kind of event because RSGA itself has not taken a stance whether it’s for or against a debate.”

DeVore had spearheaded efforts for the first-ever RSGA presidential debate held Oct. 26, 2016, between Mensa-Kwao and Carter McCormick (18PH) in his capacity as the Rollins representative to the Graduate Student Government Association (GSGA).

“I asked [GSGA last year] if we could have a presidential debate and I was given permission to run with it, and everything went well, no questions asked,” DeVore said.

RSGA’s elections are governed by GSGA’s Elections Board, chaired by GSGA Chief of Staff Kyle Davis (18B). Davis did not respond for comment by press time. Debates are not required by the RSGA Constitution.

Voting opens for Rollins students Oct. 31 and runs through Nov. 3. Results will be announced Nov. 6. 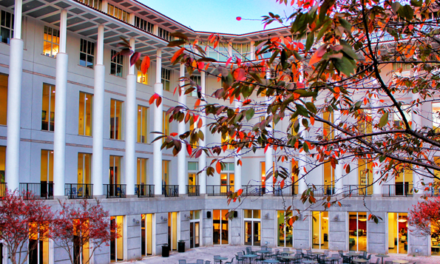