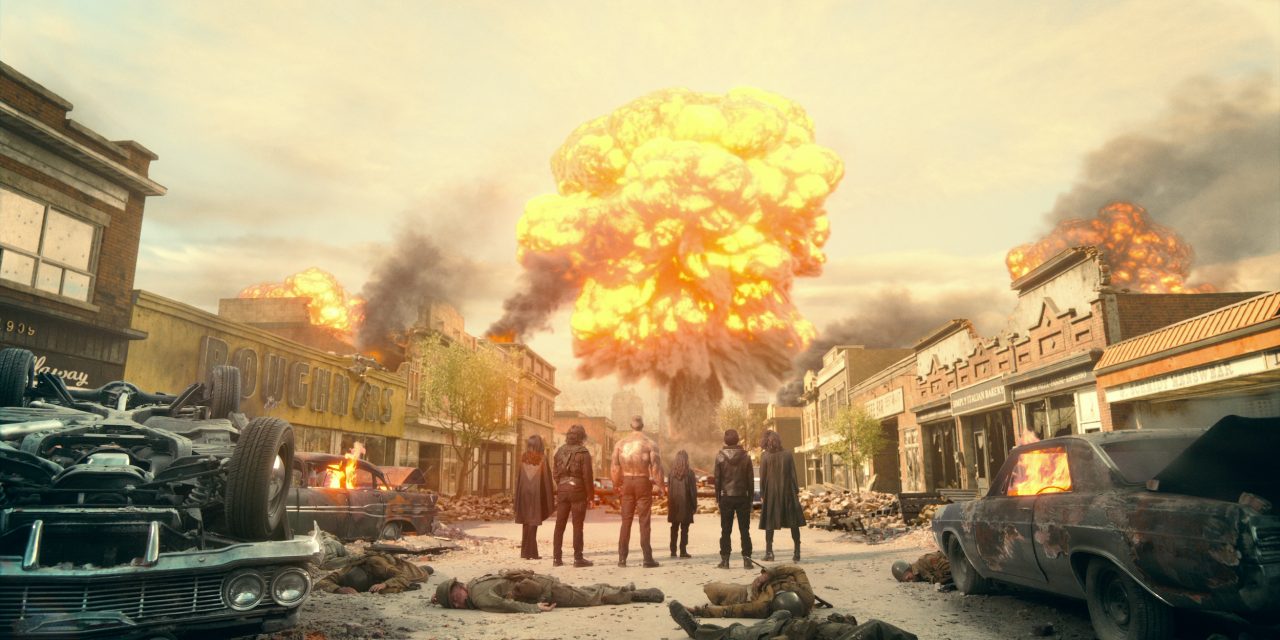 Talking chimpanzees, time traveling assassins and robot mothers seem like they wouldn’t work, but “The Umbrella Academy” weaves all these clashing threads together for a gripping, bingeable show. The first season of the hit Netflix show was 2019’s ninth most popular release and third most popular series on Netflix in the United States. Needless to say, there were many fans eagerly awaiting the next installment of the series, especially after the first season left us on a world-ending cliffhanger. Luckily, the show managed to live up to those expectations with more superpowers, world-ending chaos and sibling banter than before.

The series is based on the comic book series of the same name by Gerard Way and Gabriel Bá, and it follows the Hargreeves siblings, an eclectic super-powered family of seven dealing with the death of their adoptive father, Sir Reginald Hargreeves (Colm Feore), who harshly trained them to protect the world. The first season brought the siblings together after their father’s death forcing them to reconcile the impact of their abusive childhood on their lives. Despite the family’s super powers — i.e. the ability to control minds, speak to the dead and teleport — the family was unable to stop the apocalypse and is instead forced to watch as their sister Number 7, or Vanya (Ellen Page), caused the apocalypse. At the end of the season, they decided to use Number Five’s (Aidan Gallagher) ability to time travel out of the apocalypse, leaving them scattered across the early 1960s left to fend for themselves. However, when they find that there’s another impending apocalypse on the day of former U.S. President John F. Kennedy’s assassination, they must assemble again to stop yet another cataclysm. 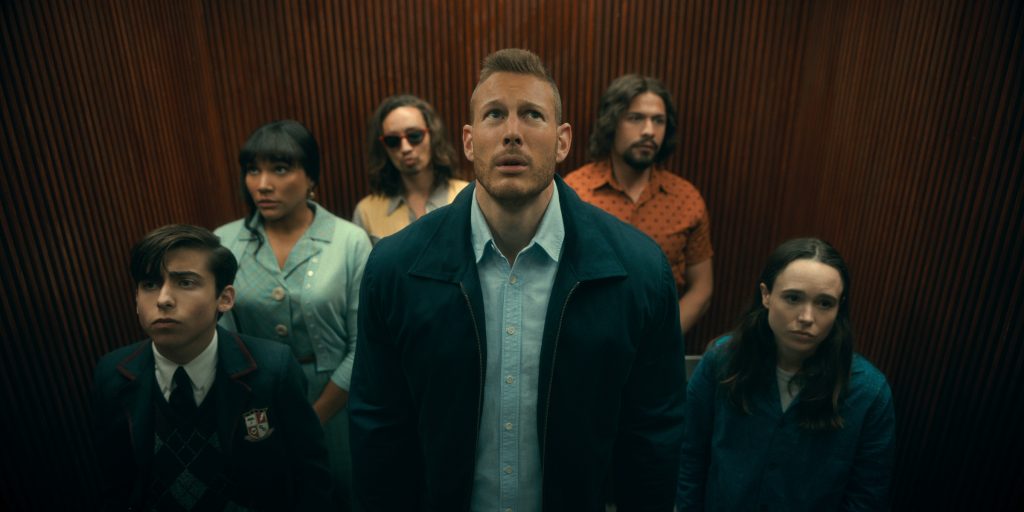 The Hargreeves siblings taking an elevator ride to see their future father./Courtesy of Netflix

The first season laid the groundwork for the siblings’ relationships, powers and daddy issues, so that the second season is able to jump right into the action without much explanation needed. Not only do the characters use their powers a lot more in this season, which is great for superhero fans, but they also each make many mistakes, allowing for a more human element that many superhero shows miss. The superpowers are there, but the main focus of the show is on the relationships and the coping mechanisms each sibling uses to get by. As a fan of comic book films and television shows, it’s refreshing to see the show humanize its characters instead of idolizing them and not forgetting their humanity for the sake of action.

Superhero blockbusters dream of achieving the depth “The Umbrella Academy” easily gives its characters. Each character is presented with a different dilemma once arriving in the 1960s before the family reassembles. Basing their actions on the knowledge of Kennedy’s assassination, Number One, or Luther (Tom Hopper), becomes a bodyguard for Jack Ruby, a nightclub owner who killed Kennedy’s assasin, and an underground fighter. Number Two, or Diego (David Castañeda), is stuck in a mental institution as he is obsessed with the idea of being a hero, saving Kennedy and changing the future. Meanwhile, Number Three, or Allison (Emmy Raver-Lampman), becomes a civil rights activist to fight against segregation laws and Number Four, or Klaus (Robert Sheehan), starts a cult. Meanwhile,Vanya has her memories wiped and is living on a farm.

The storylines of Allison, Klaus and Vanya are some of the most meaningful as they deal with real issues people were going through at the time. 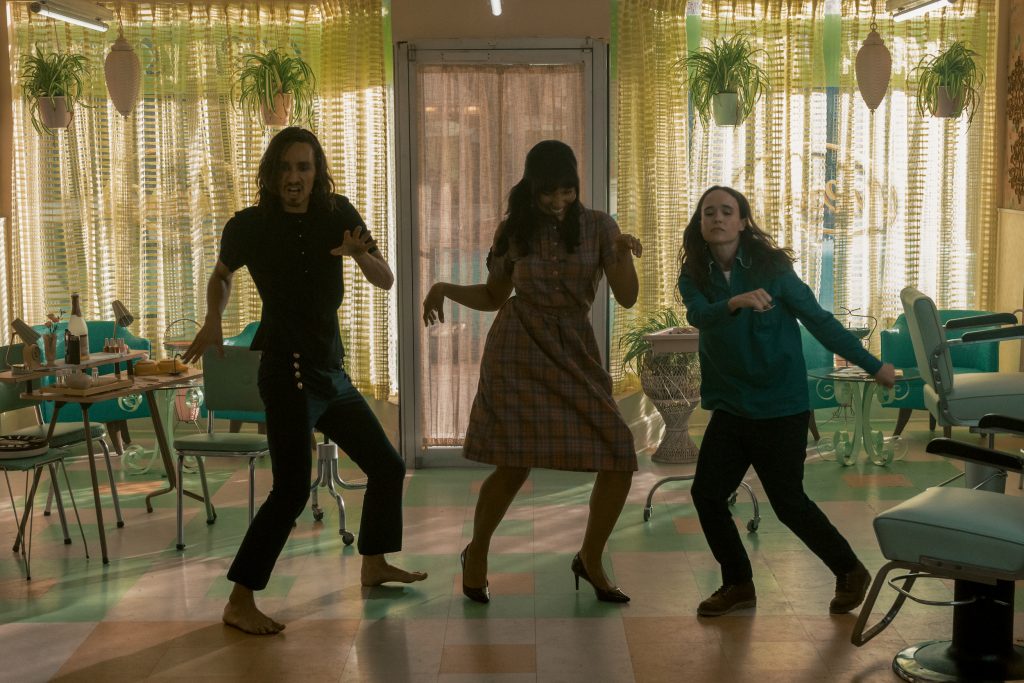 From left to right: The siblings, Klaus Hargreeves (Robert Sheehan), Allison Hargreeves (Emmy Raver-Lampman) and Vanya Hargreeves (Ellen Page), dance together in a sibling bonding moment in the midst of world-ending problems that surround them./Courtesy of Netflix

Allison goes from being a beloved actress in her past life to the segregated South where she has to deal with racism and segregation. Her story is even more topical now as it deals with the fight for equality through peaceful protests. Meanwhile, Klaus and Vanya also deal with prejudice as they experience homophobia and the misconception that LGBTQ people were mentally ill. Klaus tries to save his partner, Dave (Cody Ray Thompson), from enlisting in the Vietnam war, which was where they met in season one. Vanya explores a relationship with Sissy Cooper (Marin Ireland), a woman stuck in a terrible marriage, as they grow closer together in a time when that was unacceptable. Both stories deal with the backlash Klaus and Vanya face from the characters around them and the bystanders’ failure to accept LGBTQ people for who they are.

Season one was about the group getting back together, but season two depicts them becoming a family. The Hargreeves siblings are the only ones who truly understand each other, which allows them to grow closer and become a better family. By mapping out the  family dynamics in the first season, the writers are able to capitalize on the already established fictional world, having characters joke about their past love interests or reference past apocalyptic events without much exposition needed.

One of my favorite aspects of the show is the soundtrack. The mashup of songs from the 1960s and modern songs both enhance and contrast the moments terrifically. The music makes many of the fights more enjoyable because it maintains a lighthearted tone. If you enjoyed movies like “Guardians of the Galaxy” or “X-Men” because of the great use of music, you should watch “The Umbrella Academy” because they have a wonderful way of weaving the songs into the narrative.

“The Umbrella Academy” is easy to dive into and enjoy as the Hargreeves have to save the world from another apocalypse; it again leaves me impatiently waiting for another season to see where they can go from here. Fans of superheroes, tactful music choices and heartfelt stories will definitely enjoy the season. Without the burden of the exposition needed to introduce the fictional world, season two is even better than the first as it gives characters more depth and room for the spectacle of their powers.