‘The Late Show with Stephen Colbert’ Maintains the Wit, Intelligence of its Host in a Reassuring First Week 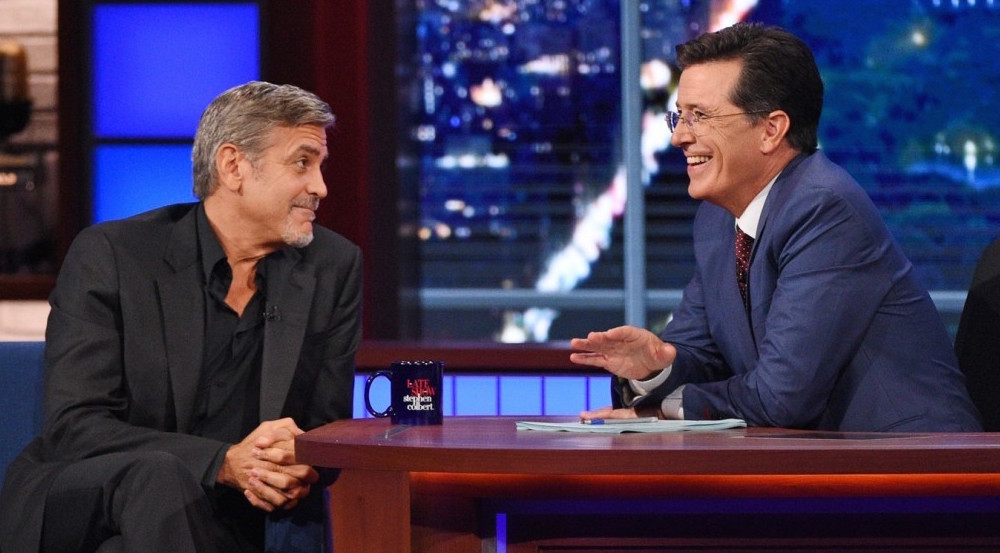 I mean I’ve seen almost everything he’s done. I watched “Strangers with Candy” because he was in it (and found that there’s a whole world of reasons to watch that wonderfully weird show). I’ve seen all of the tragically short lived “The Dana Carvey Show” and “Exit 57” and gone through every “Daily Show” segment. I wrote a final paper in high school on his 2006 White House Correspondents’ Association Dinner speech. I’ve sought out every interview, essay and writing about him. I think he’s one of the best and most brilliant comedians working today.

The short of this is that if you’re looking for a totally impartial perspective on the first week of “The Late Show with Stephen Colbert,” then I advise you look elsewhere. This is a fan’s perspective, and I won’t be able to change that.

But that’s not saying that I didn’t come into this week with some trepidation. After all, the late night talk show format has not exactly been the breeding ground for the laser-sharp satire or format breaking that Colbert is capable of at his best.

The late night talk show has been, for a very long time, a stagnant form, capable of brief modulations but never true innovation. Jimmy Fallon has had success on “The Tonight Show” by altering the timbre and content of his celebrity interview segments to feel like you’re watching celebrities play games in their living rooms. It’s the inherent thrill of “they’re just like us.” Conan O’Brien has introduced a travelogue aspect as of recently that takes his inherent strangeness and puts it up against the world around him. And Jimmy Kimmel brings a frat guy-style of prank-based humor, a holdover from his days as the host of “The Man Show.”

But largely, all of these guys (and guys is definitely not a gender-neutral usage here) are sticking to the basic late night formula: an hour consisting of comedy, then celebrity interviews, then music. My fears were that Colbert would lose what made him so fresh and original on “The Colbert Report” and fall into the broad style that gets YouTube views and makes folks chuckle as they’re falling asleep.

So, at the end of the first week, are my fears abated?

The short answer is yes. The show’s pretty enjoyable. For the long answer, let’s go back to that basic format outlined above and look at the comedy, the interviews and the music.

Reviewing comedy for the first week of a late night talk show is difficult, because it’s the element that’s going to be forever in flux. Partially because topicality is going to infuse the show with a different energy at different times, especially with someone as political as Colbert. Moreover, the show is still trying to find its new voice, and that takes time.

However, this first week gave something to be optimistic about, even if it isn’t all there yet. Now, to be fair, much of the optimism is because of how much of the sense of humor is brought over from “The Colbert Report.” While he’s not playing his character from that show, many of the mannerisms are imported. His constant references to his producer Jimmy, his dancing, the “STEPHEN” chants at the beginning of the show are all still there. The segments from the desk are also very similarly pitched to “The Colbert Report” with the same delivery and his use of on-screen graphics to add to the joke or to even provide ironic counterpoint. Much viral attention was given in the first week to the Oreo/Donald Trump bit, and it makes sense for this bit to resonate. It’s easy to see that as a “Colbert Report” bit. It’s very likely we’ll be seeing a lot more of that.

But it would be a shame if that’s all that ends up being a part of the show. Because the more alternative comedy and less political bits have shown a talent that hearkens back to his “The Dana Carvey Show” days, where he performed and wrote more traditional “Saturday Night Live” style sketch comedy that was roughly 10 years ahead of its time. Now, they don’t all work. His “Big Thoughts with Bigger Stars” in Episode Two bit felt limp, largely floundering around without much of a point. The NFL opening of Episode Three utterly bombed, it was hard to even find a real joke in the whole affair beyond product placement. But the Episode Four sketch entitled “Yesterday’s Coffee” was a beautifully dark piece about twisting the mundane. Perhaps the best was in Episode One where a Sabra product placement gag on the orders of a demonic force had the people I was watching it with rolling on the floor.

To sum it up, the comedy is good, but, for the moment, inconsistent. It’s going to take time to figure out, but Colbert’s got the right idea already — it just needs work.

What needs significantly less work is Colbert’s interview skills. I’m not exaggerating by saying Colbert is currently the best interviewer on late night. I mean, this is because none of the other people on late night are fantastic interviewers. They do the job but little else. Colbert made a deliberate choice to avoid people who are directly promoting anything to show the candidness and depth he can pull from his subjects. Plus having people beyond movie stars and pop idols, such as Stephen King or Jeb Bush, gives a uniquely intellectual character that the show will hopefully be able to take advantage of as it keeps going.

Obviously, the elephant in the room when discussing the interviews so far is Joe Biden. Colbert’s interview with the vice president went deep and emotional, allowing the two men to bond over their shared tragedies and faith. It was not only a great interview, but also a great moment for Colbert and Biden to show what they’re capable of. It’s definitely going to be on any clip reel at the end of Colbert’s run on CBS.

But other interviews have been, at the very least, interesting. His repartee with Amy Schumer shows why they are both the comedy “it” folks at the moment, he broke down the barriers of the “we’re all friends” celebrity interview with George Clooney and he even got Jeb Bush to warm up a bit. Interviews like those of the Uber CEO Travis Kalanick show that he isn’t going to pull honesty from everyone, but he’s definitely getting more from his subjects than anyone else out there. It’ll be interesting to see him deal with harder and harder subjects (Donald Trump on Sept. 22 — ‘nuff said).

Finally, the music. This is the least significant aspect but perhaps the weakest. Out of the four musical guests, only Kendrick Lamar really brought anything interesting or lively to the proceedings, but his performance of a medley from “To Pimp a Butterfly” is truly an essential watch for anyone who enjoys hip-hop. The other three (Toby Keith, Paul Simon and Stay Human) are fine, but nothing that tears up the stage.

More of his problem is his live band, Jon Batiste and Stay Human. They’re a lot of fun for sure. They bring a much funkier, jazzier style to late night talk shows opposed to the big band style that most of them went with. But the show has absolutely no idea what to do with them in terms of banter.

Unlike Max Weinberg (Conan), The Roots (Jimmy Fallon), Reggie Watts (James Corden) or Paul Shaffer (David Letterman), there’s almost no interaction between Colbert and Batiste, and it leaves the band feeling superfluous. Honestly, at points, his live band feels like a soundtrack, not a band.

So, at the end of his first week, Colbert is not revolutionizing the format. No one should expect that of him. He’s still got a few kinks to work out in the basic construction of the show. Not every comedy bit works and usage of his band still eludes him. But his wit and intelligence remain consistent, both in the holdovers from “The Colbert Report” and in the new infusions to the show. “The Late Show with Stephen Colbert” is going to be a fun one to watch, especially as it comes into its own.
Good luck, Stephen Colbert. We’re all rooting for you — especially after this week.