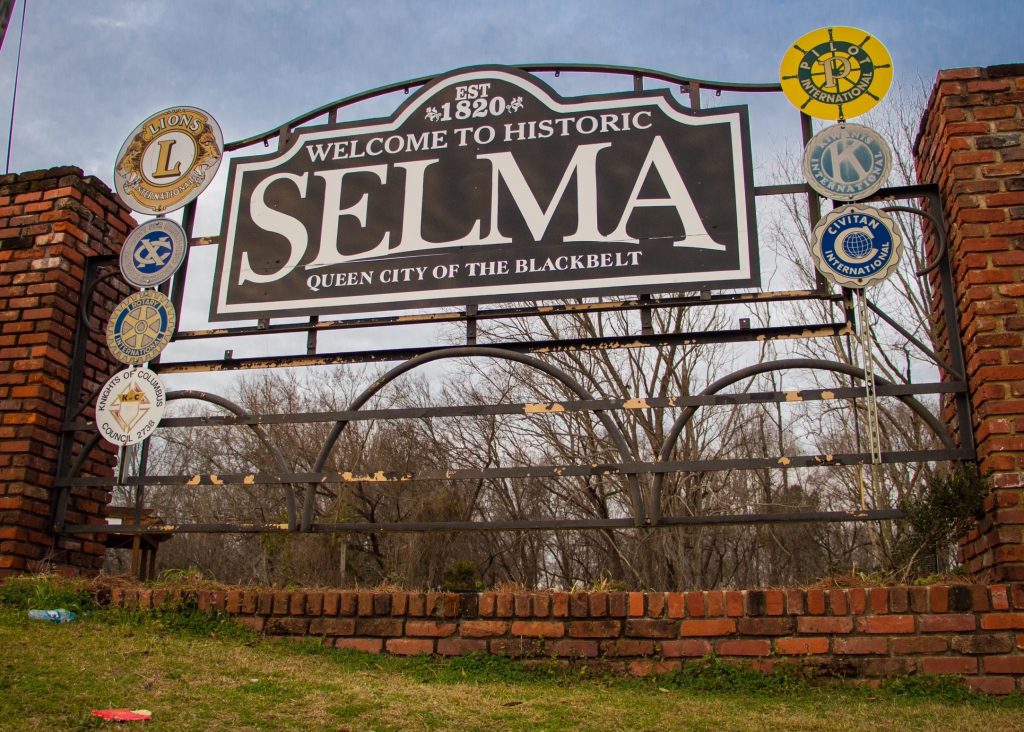 Going 80 miles per hour in a zone where the speed limit was 25 miles per hour helped me to conceptualize the vast emptiness of Selma’s community. When I say vast emptiness, I am not referring to Selma’s history and the amazing people who call it home, but rather the landscape, along with its notoriety as the poster child of food deserts.

Selma wasn’t originally known for food deserts. Rather, it has a crucial place in American history, best known for Bloody Sunday, a civil rights march on March 7, 1965. The 600 demonstrators were supposed to walk from Selma to Montgomery. However, it turned violent when they were attacked by state troopers, all to stop them from marching for voting rights. The Edmund Pettus Bridge, where the Bloody Sunday attack happened, is a pivotal place for visitors today. A week after the Bloody Sunday attack, President Lyndon B. Johnson introduced the Voting Rights Act of 1965 to prohibit discrimination in voting. Today, the route is now a national historic trail, where every year many tourists come to walk the trail and simmer in its historical happenings.

Selma is not only known for its historical events, but also for its rich soil, immense farming success and industrialization. At one point during the 1800s, Dallas County was one of the fourth richest areas in the country. However, today it is a community stricken with immense poverty. How did it get to this point? I drove to Selma to find some answers.

Before coming to Selma, I was quite nervous about what to expect. I did not know if I would be perceived as another tourist making false promises of restoring Selma. Coming to Selma, I had the intention of seeing the city and asking community leaders how Selma has dramatically changed in the last decade. However, what I got was a glimpse of not only the city but also the warm kind-hearted people who hold Selma dear to their hearts. Although the region was economically disadvantaged, its residents were optimistic about their everyday living and had vivid knowledge of Black culture in Selma.

A monumental figure I met during this trip was Annie Pearl Avery. She was a civil rights activist who was involved in Bloody Sunday on the Edmund Pettus Bridge in 1965. I was surprised to meet an embodiment of the past, as it reminded me that history was not too long ago, as we have living people that can recollect their experiences and share these stories. She mentioned a quote told to her by her community college professor while we were discussing the history of Selma that still stands out to me today.

“We need to start off with the positive instead of starting off with slavery,” Avery said. “We were not always slaves.”

It is always easy to highlight the historical trauma and not really look at the pleasant times. Whenever we reference African Americans, it tends to be about slavery and discrimination. However, there is a lot more history to African Americans than just that. Hearing this made me shift my perspective about Selma being vulnerable and a place stricken with traumatizing history. Rather, it made me look at the people, ponder on the cuisines I ate while in Selma and also contemplate on the historical markers placed throughout Selma. These various facets are all powerful as they not only highlight the story of Selma but also exemplify the immense potential Selma has to be a better environment. Although these people were struggling with political instability, food deserts, job security and more, they have kept a positive mindset and didn’t start off their day with gloom.

Furthermore, after meeting Avery, I was greeted by a “Welcome to Selma” sign alongside a store with Selma posters, buttons, historical books and welcoming people. I was greeted by a woman who asked me about the purpose of my trip. I mentioned that it was to get a gist of Selma, and she told me about her experiences. Previously a dancer, she held dance classes for some of the kids nearby. Hearing this, I found dance to be a wonderful outlet away from the harsh reality of Selma. In addition, she mentioned how she was helping out with Jubilee Weekend, an event to commemorate Bloody Sunday and the Voting Rights Act. Hearing all of this made me feel such joy as there were people in the community adamant about keeping the historical spirit of Selma alive. It also made me think a little bit more about the demographics of Selma today.

Poverty. A word hard to conceal in the everyday vocabulary of Selma residents. Selma has roughly 17,000 residents where Black people make up about 83.4% of the population. Very few hold a bachelor’s degree and the median household income is around $27,000 a year. Knowing all of this alone, you can only imagine many of the lives of the people who call Selma home. They don’t have the necessities like their neighboring cities in Alabama. Many of these residents depend on government support just to pay for food and cover health costs. Though Selma was a place that funneled voting rights, the vote did not do anything for the residents who lived there. It failed to bring economic justice to the Selma residents. Instead, it became a forgotten place — just one that gets visited during Black History Month and ignored for the rest of the year. 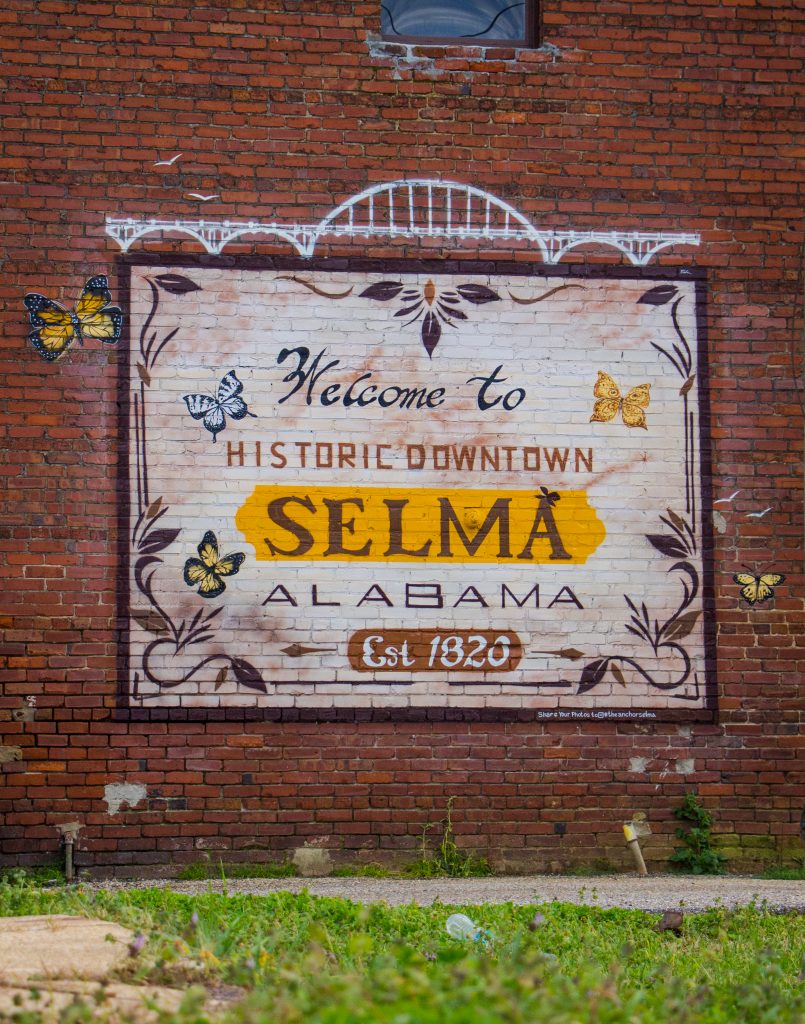 Selma is known as the Queen City of the Black Belt, a region of Alabama referring to the region’s rich black topsoil. The city initially thrived due to farming. However, once farming began to decline in the 21st century, the farming industry began to extinguish, jobs diminished and people went elsewhere for opportunities. Along with many other factors like government corruption and the lack of grocery stores, Selma turned into a food desert, or an area where people have limited access to a variety of healthy foods.

During my visit to Selma, I met Jeff Harrison, the executive director of Selma Area Food Bank. He was born and raised in Selma. He witnessed the political and economical changes in Selma and Dallas county. For most of his life, he focused on banking. But in 2015, he decided to be the executive director of the Selma Area Food Bank. The personnel committee of the food bank decided he should be the executive director as he mimicked all the great traits of a leader that Selma needed. Along with snippets of his life, he also gave me a very detailed description of the lack of adequate food provided to the families of Selma. When driving around the Selma area, I noticed there were no groceries stores to be found. The only constant reappearance was Dollar Tree.

“Now there are plenty of family dollar stores sprinkled around everywhere, a dollar general, you’ll see tons of those,” Harrison said. “You know you can survive out of one, but you certainly won’t thrive.”

I rarely go to Dollar Tree and when I do, it is to get snacks. Because there are no groceries around the area, I wondered what residents could possibly be getting from Dollar Tree to make nourishing food and be able to eat healthily. There were little to no grocery stores where residents could buy fresh food and produce, and I became much more grateful to have access to grocery stores back home within a five-mile radius.

As a result, many residents rely on food banks to get their food. This begs questions: who gets access to adequate food? Who is able to live a sustainable life? How does your zip code number define your lifestyle? Race plays such a big determinant in the quality of life these residents are able to receive. As the majority of Selma residents are African Americans, it puts so much into perspective on the lack of care they are receiving. They receive the short end of the stick while other cities are being cared for.

“So with getting food for the food bank, it starts with us going to Walmart. We go to the Publix in Montgomery and also travel to the various grocery stores that donate food to us,” Harrison said. “We bring that back in, sort through it, and dispose of anything not good. Then we’d redistribute it out along with food that we get from the USDA. So every day we’re going to different sources bringing in food, and that’s what we do.”

Hearing about how many Selma residents get their food from food banks and are constantly below the poverty line frustrated me. I wondered how I can help as a college student, not wanting to make empty promises because that is what a lot of political figures do when coming to Selma. They pump the residents’ heads with all of these promises of making Selma a more sustainable community and never step up to the plate.

“People get grants for Selma and promise to enact change, however, it does not happen and it is hard to trace back what has been done with the grants,” Summer Sturdivant, a Selma community leader, said.

Doing this to the residents has made them quite hopeless of seeing actual change and somewhat unmotivated to make a change. When it came to helping Selma, I did want to make a change, even if it was little or tremendously big.

How can we have the backs of other impoverished communities but not Selma? Despite having a prominent place in our history, Selma was and is constantly neglected. With corrupt politicians and people not paying attention to Selma other than during Black History Month, it shows how unacceptable of a job America has been doing to be a united force when it comes to tackling poverty, food scarcity and crime. How can we as individuals focus on what we can do for Selma, instead of what Selma can do for us? How can we raise awareness and shift the gears to people focusing on Selma’s economic development? These are questions that we should ponder on a bit more.

The community in Selma has been having so many meetings to see what needs to be done, but it should not be Selma itself trying to put the pieces back together, it should also be neighboring areas. It should mainly be political figures who come once a year to do a photo op and leave.

There are so many ways that we can support Selma. Because I would like to see Selma be restored into the once-prosperous community it was, I combined a list of ways that readers can give back. It is not an immense way of contribution, but it is still a great way to give back to the community and learn more about a place that deserves our attention not just for its past but also in the present.

You can donate to or volunteer at Selma Area Food Bank, donate to the National Historic Trail Alabama and donate to the Selma Center for Nonviolence, Truth and Reconciliation. You can also become a member of the National Voting Rights Museum and Institute to help preserve the historical record of Selma and more.

Overall, we can all play a part in helping this community, so that the restoration of this amazing place will no longer become a dream, but can come to fruition. 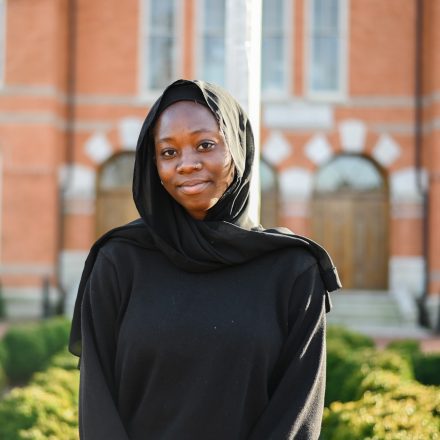 Aisha Tunkara (she/her/hers) (23OX) is from Atlanta, Georgia. Currently she is undecided, but she might consider majoring in International Studies. Outside of the Wheel, Aisha is a peer facilitator for Empower Oxford, where she helps to facilitate Bystander Empowerment training. In her free time, Aisha loves visiting different boba shops around Georgia. Contact Aisha at [email protected]