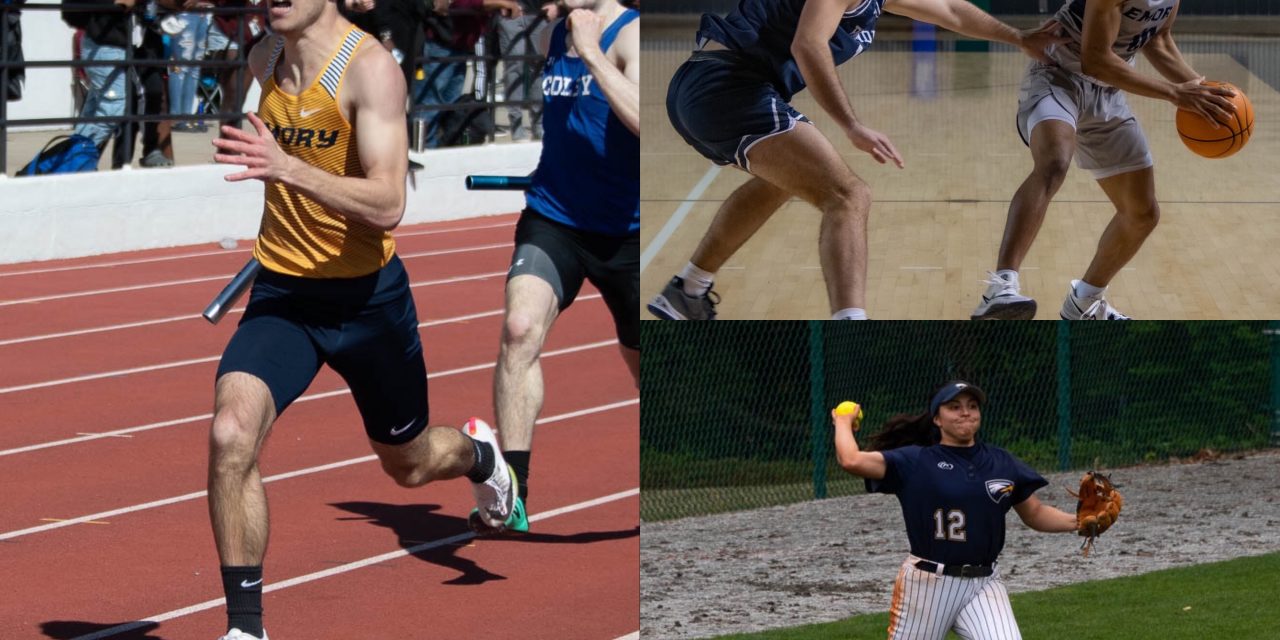 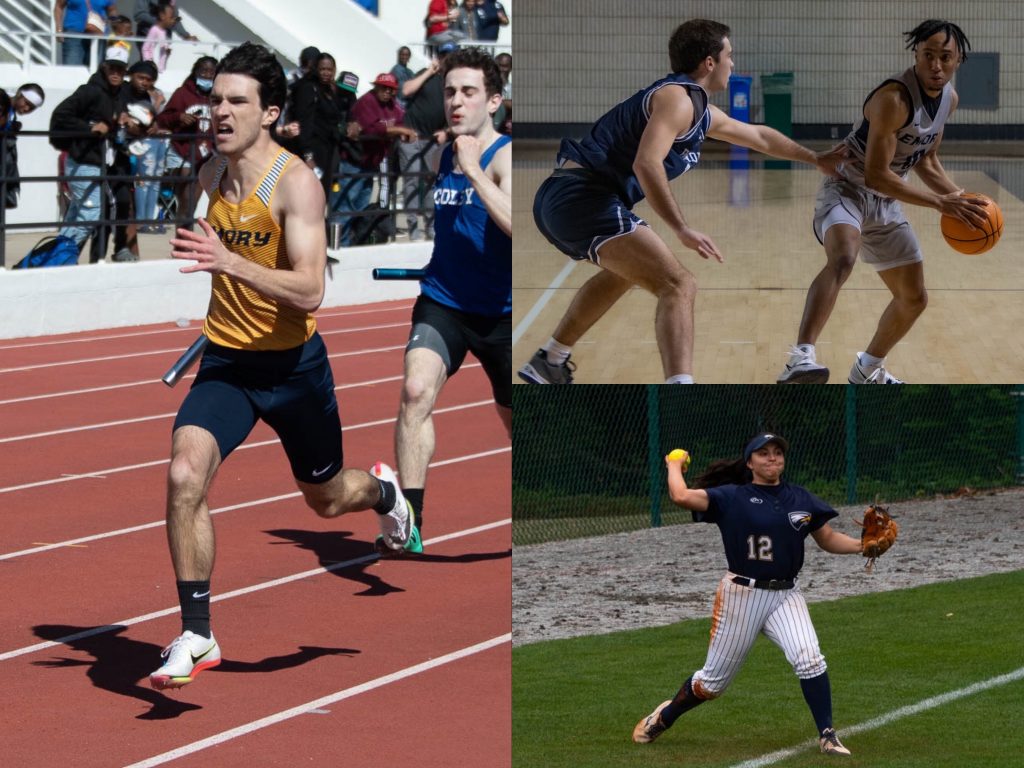 When Emory University men’s track and field sprinter Liam Fost received the news in March 2020 that the NCAA was shutting down winter sports due to the COVID-19 pandemic, he assumed that the hiatus would last no longer than a couple of weeks. As weeks stretched into months, Fost watched the precious final months of his athletic career slip away. It wasn’t until the University Athletic Association (UAA) canceled winter sports for the 2020-2021 season — coincidentally, just two days before the NCAA granted all Division III athletes an additional year of athletic eligibility — that Fost became receptive to the possibility of using his fifth year.

“At that point I was like, ‘Okay, what am I going to do next year?’” Fost said. “[I was] realizing I’m dissatisfied with what COVID did to my track career, that I knew I had more to give. Mentally [I was] wanting it and [I was] realizing I can probably work something out.”

At first, Fost, who is on the pre-med track, considered taking a gap year after his undergraduate graduation in May 2021. However, the lingering disappointment from his “unremarkable” spring track season pushed him to explore other academic options, namely a master’s degree in bioethics. Although others tried to persuade Fost to join the workforce instead of returning to school, he was determined to seize the opportunity to extend his track career.

“I was definitely more compelled to [get my master’s] by the fact that I had eligibility to keep running,” Fost said. “I could have worked in clinical and gotten paid. A lot of people probably would have said that’s the right thing to do, [that] it’d be nice to not have the financial burden, [that I’d] be getting all this great experience which would help for med school. It seems like a no-brainer, but for me, I was really compelled to get one more chance to run.”

Emory men’s basketball guard Romin Williams also had no plans to immediately pursue a master’s degree after his undergraduate education until his entire senior season fell victim to the pandemic. Like Fost, Williams wanted to maximize his time as an Emory athlete. Taking his fifth year allowed him to finish his athletic career on his own terms while building upon his undergraduate studies at the Goizueta Business School.

“I didn’t want to end only playing three years of college basketball when I’m really supposed to have four,” Williams said. “I did some research within Emory to try to find a program within the school that I [had] already been at for the last three years, and that’s when I found an MSBA (MS in Business Analytics) program.”

Williams continued to train with his teammates and had the full support of his coaching staff, who assured him he would be welcomed back for his fifth year if he chose that path. However, Williams explained that no one on his team was fully equipped to help him navigate the challenges and workload the program demanded.

Emory softball infielder and first year Emory Law student Natalie Costero is no stranger to rigorous academics either: while playing softball at Lynn University (Fla.), she obtained her bachelor’s degree in marketing in two and a half years and her master’s degree in business in the remaining one and a half. When Costero learned that she had an additional year of eligibility, she knew she wasn’t ready to give up softball. Nonetheless, the job market uncertainty from the pandemic and her passion for leadership drove Costero to attend the Emory University School of Law — a “once in a lifetime opportunity.”

Initially, Costero had made peace with retiring from softball in favor of advancing her education, but after conversations with head coach Adrianna Baggetta and senior outfielder Megan Weisenberg, her former grade school teammate, she decided to tackle both. While the workload has been incredibly demanding, Costero said she believes the structure softball provided actually improved her work ethic and time management.

“Softball was something that was a constant,” Costero said. “Softball gave me a strict schedule and guided me through my first year of law school. As much as I could say that there are times that I lose studying hours, which is rough, there are tons of times where I can guarantee you other people in my school are sitting on their phone, and softball just doesn’t let me do that.”

Costero is one of only a handful of women in Emory history to attend law school and play sports simultaneously, and for good reason. Although Baggetta has been extremely respectful and accommodating of her commitment to law school, Costero has had to miss practices and travel solo to games to meet her law school requirements. When everything becomes overwhelming, Costero said that she recalls the guidance of former Emory volleyball player Natalie Berkowitz (21PH, 23L), who also played sports while in law school.

The absence of mentors compounded the difficulty of Williams’ experience and contributed to this past year being the “hardest” of his time as a student-athlete. Group projects and meetings replaced the time he used to spend relaxing with teammates and improving his game, a transition which Williams admitted pushed him out of his comfort zone in the beginning.

“I wish that I had someone go through [this] before me and at least give me that insight and mentally prepare me for what I was getting myself into,” Williams said. “At the same time, I think I was put in a position like this for a reason. I’m very happy that I was the first one to do it, because now I know that even when you go into something [where] you may not know exactly how rigorous or consuming it may be of you mentally and physically, you can still get through it.”

Although Fost also found adjusting his training schedule and balancing his academics extremely challenging, for him, the pressure was particularly heightened on his athletic performance. Given that he had turned down financially lucrative opportunities and an Ivy League graduate program acceptance to run at Emory, Fost felt as though only an exceptional final season could prove those who questioned his decision wrong.

“There was that [pressure of] having to justify it for me, and the pressure to do well was for me to say, ‘No, I made the right choice,’” Fost said. “My first meet I opened with a very strong season opener, technically a new personal best. Right then and there, that’s when I’m like, ‘No, I haven’t peaked, and I’m here to push myself further.’ Seeing the potential I had made it clear in my mind that I made the right decision.”

For Costero, putting forth her best performance was secondary to enjoying her final months as a collegiate athlete. She had once considered a “second chance” at playing softball to be incompatible with her law school schedule, so being able to continue playing the sport she loves has made even the most trying times easier to bear.

“Because I know what it was like to think that softball was over for [me], I’m able to get through the rough part with ease now,” Costero said. “I know that leaving the game forever is so much harder than going through the rough parts . . . obviously I want to do great, I want to make every play. But sitting here and making a mistake, as much as I want to beat myself up over it, it’s not as bad as not playing the game.”

Even with the additional responsibility Williams shouldered this past year, he certainly made his mark athletically and academically: he is the men’s basketball program’s all-time leader in made three-pointers, ranks fifth all-time in scoring and will become the first African-American male in Emory history to graduate from the MSBA program. Williams sought to incorporate the “growth and maturity” these fifth year experiences and accomplishments have given him into his leadership role on the team, becoming the mentor he wished he had.

“I shifted my focus to being a guy that’s getting this younger generation of players ready to be at the helm of Emory basketball,” Williams said. “[I wanted to be] a role model for a person who shows a work ethic on and off the court, who’s able to balance a rigorous academic program as well as be there for every athletic responsibility.”

The opportunity to rejoin their teammates was part of the allure of taking a fifth year for both Fost and Williams. The fact that most of his training partners were younger than him allowed Fost to resume track without missing a step, while Williams finished his final season with fellow fifth year guards Matthew Schner and Nick Stuck. Meanwhile, Costero found “one of the best coaches [she’s] ever had” in Baggetta and a new family in her Emory softball teammates, relationships which she said have transformed her for the better.

“I thought that I would never love a group of girls the way I loved my teammates at Lynn . . . and then I came to Emory and everything shifted,” Costero said. “I’m so grateful that I’ve had this experience and I think that this group of girls are going to be my friends forever. These are sisters that I’m going to have for the rest of my life, and I never thought I’d say that about another group of girls.”