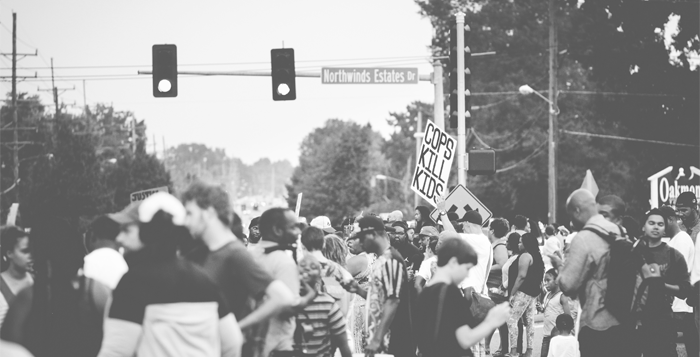 There is going to be an empty seat at Vatterott College this fall, and this seat would have been 18-year-old Michael Brown’s spot. Brown was fatally shot by Officer Darren Wilson in Ferguson, Missouri, on Aug. 9, 2014.

Brown was unarmed and was stopped for jaywalking. According to eyewitnesses, Brown was shot while he was trying to surrender with his hands up, his body faced toward the office.

While members of Brown’s family have been grappling with their loss, the Ferguson community and people across the country have been expressing their outrage over Brown’s untimely and unjust death.

There were widespread protests across Ferguson the days following the shooting that were met with a heavily militarized police response, including the deployment of armored vehicles and tear gas, a chemical weapon that has been banned in warfare.

Anger over the shooting and the militarized response quickly caught national attention and communities across the U.S. started organizing rallies and marches in solidarity with Ferguson. Within the community organizing happening in Atlanta, I noticed something right off the bat – the lack of involvement of Asian Americans.

On Aug. 14, more than 100 vigils were organized across the country under the name National Moment of Silence 2014 (NMOS2014). I went to the vigil that was organized in Atlanta that day and subsequently to various other rallies, marches and organizing meetings.

The biggest march, which got more than 1,000 people in downtown Atlanta, was held last Monday, Aug. 18. I saw a diverse group of people from Atlanta across racial and economic lines show up in the streets while it was raining, chanting for justice for Michael Brown and decrying police brutality.

These mass actions created fruitful coalitions and fostered discussions about what further steps the Atlanta community is going to take to combat police brutality and act in solidarity with the people of Ferguson. At every meeting and rally, I wondered how much more powerful these spaces could be if my fellow Asian Americans became involved.

DRUM – South Asian Organizing Center – had a rally in New York last Friday on Aug. 22 where participants spoke to the connectedness of the police violence faced by Black Americans, South Asian Americans and Arab Americans. However the majority of Asian American organizations have been silent regarding Ferguson. Asian Americans need to show up for racial justice.

In movements like the one that has been sparked by Ferguson that challenge a particular kind of racism – anti-black racism – it is imperative that Asian Americans show up and work with the black community to dismantle institutionalized racism. The power structures that once made the Chinese Exclusion Act possible, which barred all people from Asia migrating to the U.S. and Asian Americans from becoming citizens, are the same today that are perpetuating the prison industrial complex and the mass incarceration and criminalization of Black Americans.

There is a particular need for Asian Americans to get involved in racial justice work because we are complicit in furthering anti-black racism in this country. This happens partly through the operation of the “Model Minority Myth,” the idea that Asian Americans are culturally and genetically poised to strive in academia, especially in Science, Technology, Engineering and Mathematics (STEM) fields and succeed financially to achieve the “American Dream.”

This is still painfully true in most media depictions of Asian Americans. The image of a model, high-achieving Asian American is simply not true and is a gross generalization that hinders Asian Americans to bring up injustices that have occurred in our community.

The “Model Minority Myth” pits Asian Americans against other minorities in the U.S. In popular understandings of race relations in this country, there is an accusation of African American and Latino/a people of not working hard enough, of not “pulling themselves up from their bootstraps,” of not being “good minorities” (like Asian Americans). Not only does this sentiment paint all minority experiences in the U.S. with the same brush, but it uses Asian Americans and the “Model Minority Myth” to perpetuate anti-black racism.

Additionally, the “Model Minority Myth” erases the rich history of cross-racial organizing between the African American and Asian American communities. This organizing peaked during the late 60s and 70s. There was a lot of coalition work between the Black Liberation movement and Asian American activists who were organizing for fair housing, healthcare and employment. “Chinatowns” across the country transformed into community centers with free healthcare and childcare services – modeled after the services that the Black Panther Party were providing in black neighborhoods. In fact, the term ‘people of color’ was born out of this solidarity work.

There needs to be a revival of this cross-racial activism. It is really crucial that all races work to end racism. Asian Americans in the Emory community – get involved! Join the working group Emory United, know the history of Asian American activism in this country.

Let’s remember our shared history of oppression, struggle and solidarity with Black Americans and work to make racial equality a reality within our lifetime.