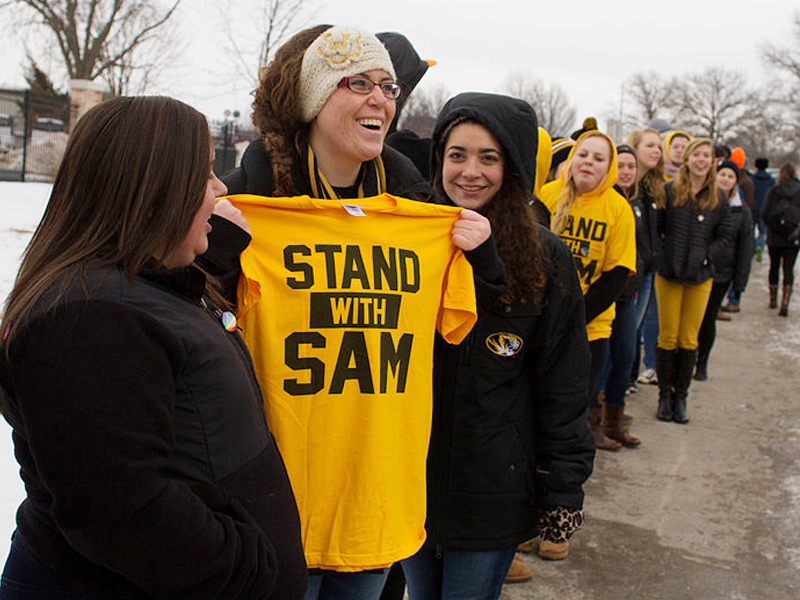 Michael Sam, a former standout defensive lineman at the University of Missouri, came out as gay last week. If the draft predictions hold true, he could become the first openly gay player in the NFL. And to some people, this is an awful predicament that needs resolving immediately. Players like Jonathan Vilma feel as though having a gay player in the locker room would be uncomfortable and foster an unhealthy environment. Additionally, some league general managers (GM’s), who wished to remain anonymous, believe that Sam’s sexual orientation will cause him to slide in the upcoming NFL draft. It is almost as if NFL locker rooms are a fortress of good, filled with individuals who are perfect in every way, and having a gay man join this clan would be heinous. For everyone that seems to be supporting Sam’s decision to come out, there is another person who believes that the NFL is no place for homosexuality.

I have been writing for The Emory Wheel since my sophomore year, and I’ve always tried to keep my political agenda out of the discussion. Although I have been willing to say which team is going to win, or which player has the most potential, I understand that people have many different belief systems on heated topics, and I respect the differences I have with my peers.

But on this topic, it seems that there is only one logical point of view. Sam is an extraordinary football player; in fact he was voted the 2013 Defensive Player of the Year of college football’s best conference, the SEC. And that should be where the discussion begins and ends about Sam.

After reading Vilma’s quotes, I feel as though society as a whole has been brought back about 70 years, to when Jackie Robinson was entering MLB for the first time. Because he was different, because his “kind,” so-to-speak, was not accepted by much of the population, people were angered that Robinson, a black man, was playing a white man’s game. Is this scenario much different? Sam, a gay man, is entering a supposedly straight man’s game. How there can be people in society who refuse to see him for what he is, an exceptional athlete who can add value to the defensive side of a ball for whichever team drafts him, and instead only focus in on one aspect of his life is truly mind-boggling. Vilma, a player who participated in the bounty scandal targeting opposing players specifically to cause injury, should be the poster child for all people against Sam. I guess someone willing to participate in such an abhorrent system would be worried about a gay man sharing a locker room, instead of worrying about improving his own game to hopefully compete for a championship.

I have never been in an NFL locker room, so I cannot speak to the atmosphere inside. But what I do know is that there have been many issues recently regarding sensitivity and perception. The Richie Incognito scandal is confirmation that there is some sort of stigma about being an NFL player, and if someone does not fit the rigid mold, they are ridiculed and harassed until the breaking point. And some people actually believe that Incognito was right, and that his bullying was acceptable.

I am all for teasing of friends; I think the ability to make jokes at the expense of people you love, and take jokes as well, fosters strong relationships. But there is an absolute, definite line between that and Incognito’s persistent bullying. Sam came out to his college teammates in August 2013. They protected his secret, accepted him for who he was, and moved on. That is how true locker room culture should be. And while none of us actually know what went on for the eight months during the season, we didn’t hear anything negative from that locker room. The point here is that if a college team full of immature young men can come together and band around one teammate’s differences, there is absolutely no reason that we keep allowing the grown men of the NFL to abide by a different set of social and moral codes.

Some people say these events (and concussion worries, and poor retirement benefits, and more) are causing the NFL to have a festering perception problem. I would argue that this perception problem has been going on long before Sam ever decided to open himself up to the world. There have been – and currently are – murderers, rapists, women-beaters, drug-dealers, drug-users and a bevy of other criminals to play this game. And we love them, so long as our team wins at the end of the day. We proudly wear their names on our backs, rooting for their success. Yet, when an upstanding citizen whose only crime is being unfairly judged by those too narrow-minded to view past his sexual orientation enters the picture, we flee. I would love to meet those NFL GMs who said that they would not draft Sam. I wonder how the atmosphere of their locker room is doing. I’m sure those teams are probably picking yet again at the top of the draft, wondering what could possibly be wrong. The NFL does have an image problem. And they are doing nothing to rectify it.

I know I would be proud to see him don the green and white of my hometown Jets, and not only because I would be proud of the Jets becoming the home of the first openly gay player, but because Sam would be a great addition to our defense. Sam, I applaud you for your courage at a time where most other people would choose to stay silent. In a world where success trumps all, I hope that Sam goes down as a Hall of Fame outside linebacker, with a few championships to boot. Oh right, and that he was the first openly gay player, too.