Emory 3-1 at Invitational, Falls to No. 13 Elmhurst 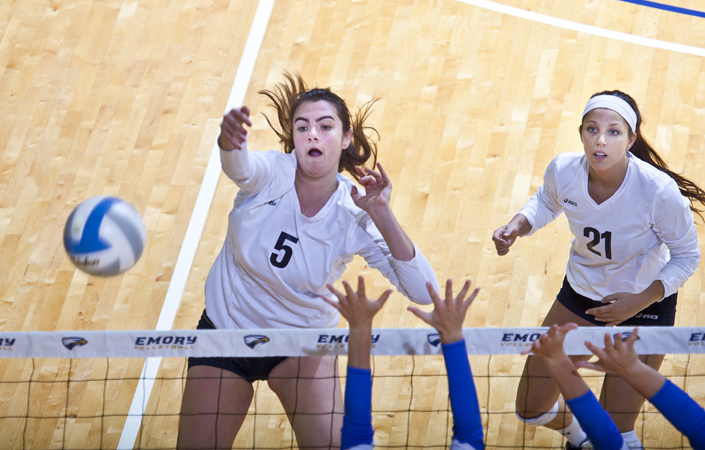 The volleyball team, ranked second in the nation among Division III teams, won three of their four matches last weekend at the Elmhurst Invitational in Elmhurst, Ill. The Eagles moved to 14-2 on the season.

The invitational, hosted by Elmhurst College (Ill.), pitted the Eagles against a pair of ranked teams on Friday, including No. 11 Eastern University (Pa.) and the host No. 13 Elmhurst College Bluejays, before two matches on Saturday against the Heidelberg College (Ohio) Princes and conference rival University of Chicago Maroons.

Emory topped Eastern in straight sets, but fell to Elmhurst before sweeping the Saturday competition. Emory topped Eastern 25-16, 25-21, 25-20 in their first match of the invitational, outhitting their opponents .176 to .055. The first set was deadlocked at 11 points a piece before the Eagles pulled away to win comfortably, while the latter two came down to the wire. Eastern cut a sizable Emory lead to 22-20 in the second set, but the Eagles earned three of the next four points to claim a 2-0 lead, and an early lead in the third set helped them stave off a late Eastern rally and sweep the match. Senior Leah Jacobs and sophomore Sarah Maher led the team with nine kills apiece.

“Sarah Maher, our rightside hitter, has been unbelievable for us this season,” Head Coach Jenny McDowell said.

The weekend’s lone blemish came in the Elmhurst match, where the Eagles launched a massive comeback after falling behind in the first two sets but wound up falling 20-25, 21-25, 28-26, 25-18, 13-15. It was a close, hard-fought battle on both ends: The Bluejays had a chance to put the match away in the third set, but the Eagles rallied from a 16-11 deficit to stay alive. Emory had a 13-11 edge in the final set, but Elmhurst won the last four points to capture the match. Maher led the team win 16 kills – at the time a career best – while Jacobs added 15. Senior Kate Bowman led the Eagles with 28 digs.

“We would’ve loved to come back 4-0, but the Elmhurst match was one of the best matches I’ve ever been a part of. It was a match of two of the best teams in the country. I’m really proud of this team,” McDowell said.

Saturday proved to be much easier for the Eagles. Emory dispatched Heidelberg with little trouble, winning 25-20, 25-12, 25-17 in straight sets and enjoying a massive .402 to .156 edge in attack percentage.

The Eagles will be back in action on Friday, when they return home to host Agnes Scott College (Ga.) and Maryville College (Tenn.)