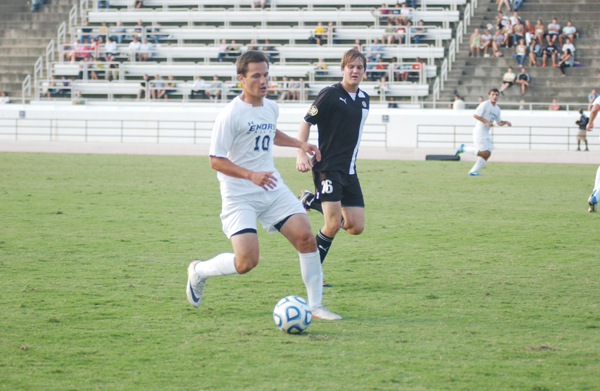 In between regulation and overtime of last Sunday’s game at New York University (NYU), men’s soccer Head Coach Sonny Travis stressed to his Eagles that they needed a goal to keep their league championship hopes alive. And sophomore midfielder Michael Rheaume delivered.

“It might have been one of the biggest goals I’ve seen at Emory, just because of what it meant for our team,” Travis said of Rheaume’s “golden goal.”

The sophomore knocked in the game-winning goal, breaking a scoreless tie with a perfectly placed shot that soared from the far side of the field past the NYU goalkeeper 24 seconds into the second overtime period.

“I’ll tell you what, every time I watch it on film, I’m amazed,” Travis said. “I told the team we had to push for a goal. On the run, Michael was able to keep his composure and make a perfect shot. It wasn’t saveable.”

Perhaps even more impressive is the path Rheaume took to get to that second overtime.

Hailing from Issaquah, Wash., he starred in high school for Seattle Prep as well as local teams Crossfire Academy and Seattle United.

“It’s kind of unusual for us to get a player from that far away,” Travis said.

Rheaume is one of only two players from west of the Mississippi on the Emory roster.

He mentions the Eagles’ soccer program as a huge reason for his choosing Emory rather than a west coast university.

Still, he very nearly wound up on a different Eagles team.

“I have three brothers, and all we would do when I was young was play sports,” Rheaume said. “In my junior year, I had to choose between soccer and baseball. I was better at baseball, but soccer was the sport I liked playing more.”

After appearing in three games during his freshman season, Rheaume was cited by Travis as one of the best players on the team during spring practice.

“He has a lot of technical ability and can crack a shot,” Travis said.

Rheaume said that he immediately noticed the differences playing soccer at a collegiate level and that he learned a lot on the field during his freshman year.

“It’s tough adjusting to the college game,” Rheaume said. “It’s a lot quicker, and you have to work a lot harder.”

His collegiate career took an unfortunate turn before the 2012 season started when he pulled the quadriceps muscle in his right leg. He returned to the field just a few weeks later only to aggravate the injury.

“It was frustrating,” Rheaume recalled. “It was something that shouldn’t have taken that long to heal, but it wound up taking the majority of the season.”

His injury has limited him to seven games this season, but Rheaume has made the most of his appearances. He has eight points and two goals on the year and leads the Eagles in shot percentage at .250.

Goals are starting to become a habit for the midfielder, who has been encouraged recently to take more initiative offensively.

“[My teammates] see me as someone who can be one of the biggest offensive threats on the field,” Rheaume said.

The new approach certainly paid off against NYU, though Rheaume admits that the implications of his game-winning goal didn’t sink in until after the game.

“We just kind of wanted to win and get out of there,” he said.

Thanks to his goal, the Eagles now have a shot at a UAA championship. With a win against Carnegie Mellon University (Penn.) and a Washington University in St. Louis loss or tie, they will claim at least a share of the title.

“Our backs are against the wall,” Rheaume said. “We have to win this game. We’re going to make sure we do everything we can do. We’ve got to give 110 percent every second.”

No matter what happens in Emory’s final regular season match, the future looks bright for Rheaume. He insists the Eagles have enough talent to win a national title within his collegiate career.

“I think he’ll be vital for us in the future,” Travis said. “He’s a great athlete and a technician.”

With just one game left in the regular season – a road match this Saturday at Carnegie Mellon – the men’s soccer team is still very much in the mix for the University Athletic Association (UAA) championship. For now, Rheaume is taking it one game at a time.

“I just want to make sure that in every game I did everything that I could do to help my team win,” Rheaume said. “And score as many goals as I can.”