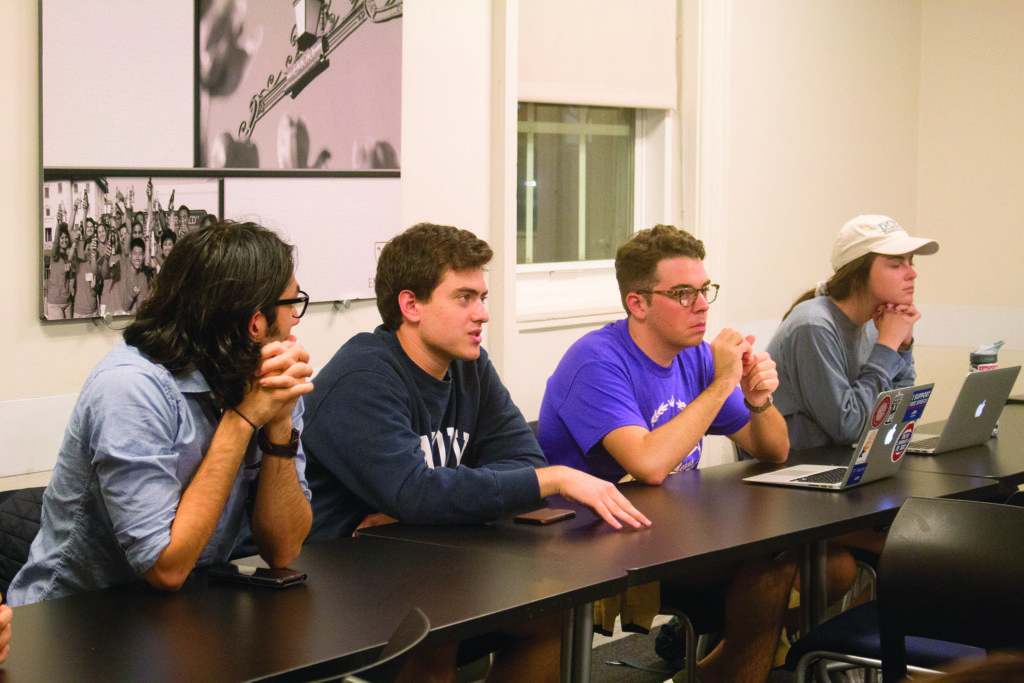 The 51st legislature of the Student Government Association (SGA) convened Monday to confirm a new vice president of communication and vote on bills that would establish a new Communications Committee and fund the Refugee Revive and TableTalk’s “Dinner Syries” and Thanksgiving airport shuttles. All bills were passed.

“I used to send out a weekly newsletter to [the Oxford] community, which I hope to continue on this campus as well,” Badsa said. “Really streamlining the communication process between SGA and the four branches that we look over through newsletter, through maybe a monthly dinner, through different ways for us to bring SGA closer to the four [undergraduate] branches.”

“The administration at Oxford was very poor communicating that to the student body, and it was over fall break so there weren’t a lot of people on campus. Whoever was staying there, they were freaking out,” Karras said. “[Badsa] was very able to come back to campus the week after that and communicate in a very long detailed essay about why the University administration chose that course of action and how they can improve on it.”

The bill passed with 13 votes in favor and one abstention. Freshman Representative Austin Graham (21C) abstained from voting. When asked why he abstained, Graham told the Wheel he did not agree with the lack of transparency between legislators during the application process, but was not against Badsa becoming VP of communications.

“I think the legislature should have a larger role in … choosing. I think we should be given a slate of candidates,” Graham said. “Though that’s not how it works now, I would like to have at least a more transparent procedure so that we can see what qualified candidates applied and were considered for the interview process.”

The VP of communications is an executive position and selected by the SGA president, according to Section Three of the SGA Constitution. Singh told the Wheel she chose Badsa with the input of Armstrong and Karras.

Bill 51sl31, proposed by Singh, Armstrong, Karras, College Junior Representative Madelyn Zapata (19C) and College Sophomore Representative Johnna Gadomski (20C), proposed to form the Communications Committee. The committee would be chaired by Badsa and includes two other positions: chair of graphic design and video and chair of community outreach. Both positions would be filled from the applicant pool for VP of communications. Singh, Armstrong and Karras will also select the applicants for the positions.

Singh explained that the SGA communications needed updates that would require more work than appropriate for just one person, the VP of communications.

“While we were interviewing candidates on Friday, [Karras and I] realized how big of a role the VP for communications is — especially for this year — because again this is an entirely new governmental structure,” Singh said. “We’ve never had an undergraduate-wide student government, and so everything needs to be updated in terms of the website, our design, our strategy for communicating [and] our outreach to undergraduate division. ”

The bill passed with 13 votes and one abstention. Graham again abstained because he wanted more transparency in the process of choosing committee members. Legislatures were not made aware of the other VP of communications applicants, Graham told the Wheel.

“I think the problem with student government a lot of the time is that we’re not thoughtful enough, and we don’t consider all of the possible options when passing legislation,” Graham said. “My two abstentions were out of protest for the kind of self-indulgent, ‘Oh we read a bill once and then we passed it’ without any real discussion. Not having longer-formed discussions about the legislation that we passed doesn’t fit with who I am as a legislator and as a person.”

Gadomski and Graham proposed Bill 51sl30, which would allocate $3,500 to airport shuttles during Thanksgiving break. Three shuttles would run hourly Nov. 21 from 3 p.m. to 6 p.m. and Nov. 22 from 5 a.m. to 10 a.m. Each shuttle holds 50 students and would take students from Emory to Hartsfield-Jackson Atlanta International Airport. Singh said the Graduate Student Government Association (GSGA) told her if graduate students used the shuttles, GSGA would fund up to the percentage of how many graduate students used the service, so the $3,500 amount is subject to change, depending on the number of graduate students who use the service. Students would sign up for the shuttles on OrgSync.

The bill passed with 13 votes and one abstention. BBA-wide Representative Max Renke (19B) told the Wheel he abstained because he believed that the time slots for the shuttles should have been better determined.

“I’m not American so I don’t understand Thanksgiving, so I just didn’t want to do anything with it,” Renke said.

After the SGA meeting, Singh confirmed that there will be a survey sent out before the holiday to undergraduate students to gauge the best times for the shuttles to run. The bill authors did not mention a survey during the presentation of the bill.

President of TableTalk Helena Zhao (19C) proposed Bill 51sl28 to fund Refugee Revive and TableTalk’s Dinner Syries events. The dinner is scheduled to take Emory students to a Syrian refugee family’s house. The family primarily makes its income by preparing and serving meals. Zhao described the event as “an opportunity to participate in [a] unique cultural exchange.” The bill requested $375 to fund a Nov. 7 dinner for 15 people and Nov. 8 dinner for 10 people. The cost of each person’s dinner is $15. The bill passed unanimously with 14 votes.

This was the first meeting where all 15 legislators were present and voting, according to Speaker of the Legislature and Senior Representative William Palmer (18C).