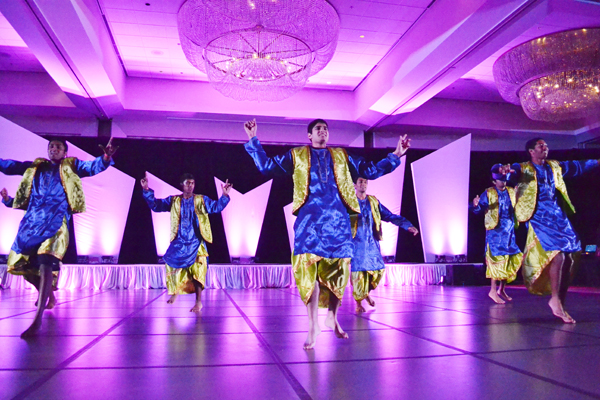 Woodruff Circle was filled with Emory students draped in brilliant colors and sequins this past Saturday evening, waiting anxiously for a shuttle to whisk them away to the night’s Diwali celebration. This year, Emory’s Indian Cultural Exchange (ICE) hosted its annual event of food, festivities and dancing at the Hilton hotel in downtown Atlanta.

The event opened with a cocktail hour at 6:00 p.m. during which students mingled and sampled Indian appetizers, such as samosas and pakoras, before the event officially began at approximately 8:30 p.m.

Lord James W. Dooley addressed the guests on behalf of his guards and engaged in the festivities himself by breaking it down with a dance, Bhangra-style. Dean of Campus Life Ajay Nair gave the keynote address, describing the history of Diwali celebrations at Emory and how the event has expanded to encompass students of all cultures.

Students expressed an overall enthusiasm about most aspects of the event, highlighting the entertainment as one of their favorite parts of Diwali.

“I thought it went well,” said Shreya Seth, College sophomore and member of Emory dance team Savera. “It was very well thought-out and extravagant. The program was entertaining and the food was great.”

“I liked all the collaborations between all the dance groups because that’s something that probably wouldn’t happen at any other event,” Vartabedian said. “I thought that really made Diwali something extra special.”

However, Seth and Vartabedian also offered suggestions for improvements that could be made for Diwali celebrations in the future.

“Dinner should have been served earlier,” said Seth. “I also think the shuttles could have been more organized because they were not leaving on time.”

Vartabedian expressed mild dissatisfaction with this year’s choice of catering.

“Although the food was still good, I thought it was not as good as last year, which I was a little disappointed by,” said Vartabedian.

“I think it went really, really smoothly,” said Mehta, “We worked really hard to take into account some complaints that people had from last year, which is why we did those staggered shuttle times and tried to make sure they were as timely as possible. I think the dance teams had a lot of fun and from what I’ve heard, the guests had a lot of fun too.”

This year, ICE Diwali attracted over 600 guests from various backgrounds and cultures. Mehta cited the diversity of Emory’s community as a reason for the event’s popularity.

“There are so many different holidays that different types of people celebrate,” said Mehta, “I think there’s a lot of respect for other cultures. About 50 percent of the people there were not Indian; they were just there to support our culture and to learn about it.”

“It’s a cultural event, but it’s also a big party: a holiday celebration where everyone gets to dress up, eat good food, go downtown and see Atlanta and see Emory’s best dance teams perform,” said Keeler.

Keeler and Kugathasan noted that Diwali was a unique event for Emory students.

“It’s not something you can do every weekend,” added Kugathasan.

Tickets for the event were in high demand, selling out within a week of going on sale. Many students who intended to attend were unable to purchase tickets before they sold out. However, Keeler and Kugathasan said this problem was unavoidable.

“We only get a certain amount of funding so we can’t go over 600 tickets,” said Keeler, “The number of tickets we can sell is limited based on how much funding we get, the size of the venue, etc. There was nothing we could have done. We tried our best to publicize ticket sales but we have to make sure we sell out.”

The two did, however, express a desire to include more students.

“If we could, we’d have all of Emory,” added Kugathasan.

Keeler and Kugathasan said this year’s Diwali celebration tried to place greater emphasis on the holiday’s cultural meaning. Diwali is the Indian festival of lights, celebrated in the Hindu, Jain, and Sikh religions. At the event, Keeler and Kugathasan led a customary lighting of diyas, or lights, symbolizing the key virtues of Diwali: light over darkness, good over evil, love over hate, and faith over disbelief.

In planning this year’s Diwali celebration, Mehta said she and Co-President Ekta Bery decided to focus on “three Cs”: culture, collaboration and community.

On the Monday prior to Saturday’s Diwali celebration, ICE and the Hindu Students Association (HSA) held an event in the lobby of Longstreet-Means to celebrate the holiday’s cultural traditions. ICE and HSA members gave a presentation about the religious, cultural, and historical aspects of Diwali. Students decorated their bodies with mehendi, or henna, tattoos. In addition, students could learn how to tie a saree, a traditional Indian dress.

“While Diwali is obviously a very fun event, we also wanted people to know the meaning behind it and why people actually celebrate it,” said Mehta.

“It’s important not to lose sight of why we’re all there and the message that it [Diwali] holds,” she added.

SGA, College Council, Office of Multicultural Programs and Services (OMPS) and Office of Student Leadership and Service (OSLS) helped contribute funding for Diwali this year. Keeler and Kugathasan said they could not disclose the total amount of money spent on the event due to Emory policies regarding funding for student activities.