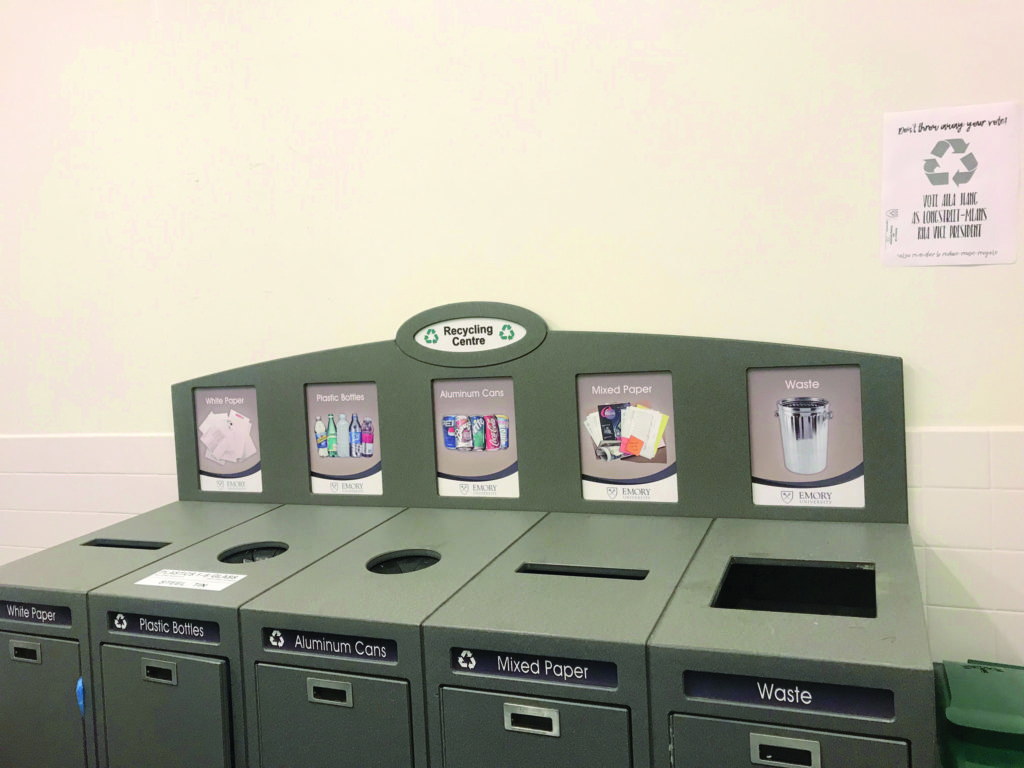 This recycling centre will be replaced with a standardized one in January 2018./Parth Mody, Photo Editor

Emory Campus Services spent between $200,000 to $300,000 to purchase new waste bins and signs to comply with Emory’s new waste management policy, which will be implemented January 2018, according to Vice President for Campus Services Matthew Early.

All University-owned, operated and controlled facilities within Emory’s Atlanta, Oxford and Grady campuses will undergo the changes, according to the policy. The changes are intended to further Emory’s efforts to divert 95 percent of waste to streams other than landfills, according to Ciannat Howett, director of sustainability initiatives at Emory.

Campus Services has hired Cascadia Consulting Group and Burns and McDonnell, two national consulting firms that have developed a materials management master plan (MMMP) with recommendations for Emory to improve its current rate of about 53 percent landfill diversion, according to Early.

Campus Services will be in charge of operational changes, while the Office of Sustainability Initiatives (OSI) will fund and lead outreach and education efforts, Howett said. The Environmental Health and Safety Office (EHSO) will be responsible for collection of hard-to-recycle waste, such as batteries, aerosol spray cans and compact fluorescent lightbulbs.

Campus Services plans to provide five standardized, color-coded bins for compost, plastics/cans, mixed paper, white paper and landfill waste inside all major University buildings. All landfill bins that are currently outdoors will be removed, and the only bins that will remain outside will be for compost and mixed recycling. Only styrofoam will need to go into landfill cans, according to Emory’s video for the Zero Landfill Waste Campaign.

The consulting firms recommended that Emory prioritize standardization of waste bins across campus, according to Assistant Director of Auxiliary Services Deena Keeler. Early then agreed that bin standardization is vital and agreed to fund it, Keeler said.

With standardization, the appearance of the bins will be consistent with the colors and signs of national recycling plans to make it easy for people to know which bins to use, according to Early.

New, standardized exterior bins have been placed outside the Rollins School of Public Health, the Nell Hodgson Woodruff School of Nursing, O. Wayne Rollins Research Center and the Whitehead Biomedical Research Building earlier this week, according to Keeler. Campus Services has already ordered the remainder of the bins and hopes to have as many of them in place as possible when the Spring 2018 semester begins, Early said.

Previously, each building managed recycling independently, leading to inconsistency in the appearance and types of collection bins around campus, Early said. Howett hopes the change will lead to “convenience, clarity and consistency” in the recycling system rather than the “current hodgepodge of collection bins.”

“In a typical day, a student may visit four to five buildings on campus, so [OSI’s] hope is that it will be much clearer to them where to sort their waste as they go from building to building,” Howett said.

Custodial staff will no longer collect desk-side waste from bins in all office spaces. Instead, faculty and staff members must bring waste to collection stations, much like students currently do in their residence halls, Howett said. Faculty and staff can still use bins at their desks, but they will need to self-sort the waste at the collection stations because custodial services will no longer collect it.

“The goal is to not put a burden on anyone,” Early said. “We’re aiming to provide enough stations that faculty and staff will just have to walk a few feet down the hallway [to reach a collection area].”

Keeler added that there has been “surprisingly little pushback” from faculty and staff for the removal of desk-side bin servicing.

“[Bringing my recycling to collection areas] is really not a big problem for me,” Instructor of Chinese Kui Deng said.

The new policy stems from Emory’s Sustainability Vision and Strategic Plan for 2015 to 2025, which states that Emory will strive to divert 95 percent of non-construction waste from municipal waste landfills, with the exception of regulated lab and medical waste, according to Howett. Emory supports culture changes toward a “reduce, repair, restore and reuse” mentality, the plan says.

“Ultimately, this is a goal that we want to be reached by 2025, but we wanted to get busy right away, figuring out how far we are from being to get to that point,” Howett said.

The plan was announced May 2016 after more than a year and a half of discussions by the Sustainability Visioning Committee which was appointed by then-Provost and Executive Vice President for Academic Affairs Claire E. Sterk in Fall 2014 and consists of members of the administration, representatives from OSI, campus services, dining and professors. Emory also had a Waste Think Tank group composed of members from Emory’s Office of Sustainability Initiatives, Planning, Design & Construction, Emory Recycles, and Building & Residential Services to provide feedback on the waste management plan, Keeler said.
Early also said that achievement of the landfill diversion goal will allow Emory to be “a real leader among peer institutions.”

The zero-landfill waste goal was vetted by members on the Sustainability Visioning Committee, because landfills have significant negative impacts both locally and globally, Howett said.

“Right now [Emory’s] landfill waste goes to landfills which lower property values, create noise pollution, and cause air quality issues for neighborhoods just down the street from us,” Howett said. “And some of those neighborhoods are minority and low-income communities that are being saddled with our waste.”

On a global scale, Emory’s diversion of waste from landfills helps mitigate climate change because landfills produce methane, one of the most potent greenhouse gases in the atmosphere, and it is a large portion of Emory’s carbon footprint, Howett said.

In 2016, Emory emitted 1,103 metric tons of carbon dioxide due to landfill waste, equivalent to the greenhouse gas emissions from 236 passenger vehicles driven for one year, according to Howett.