‘A Private War’ a Haunting Tale of a Remarkable Woman 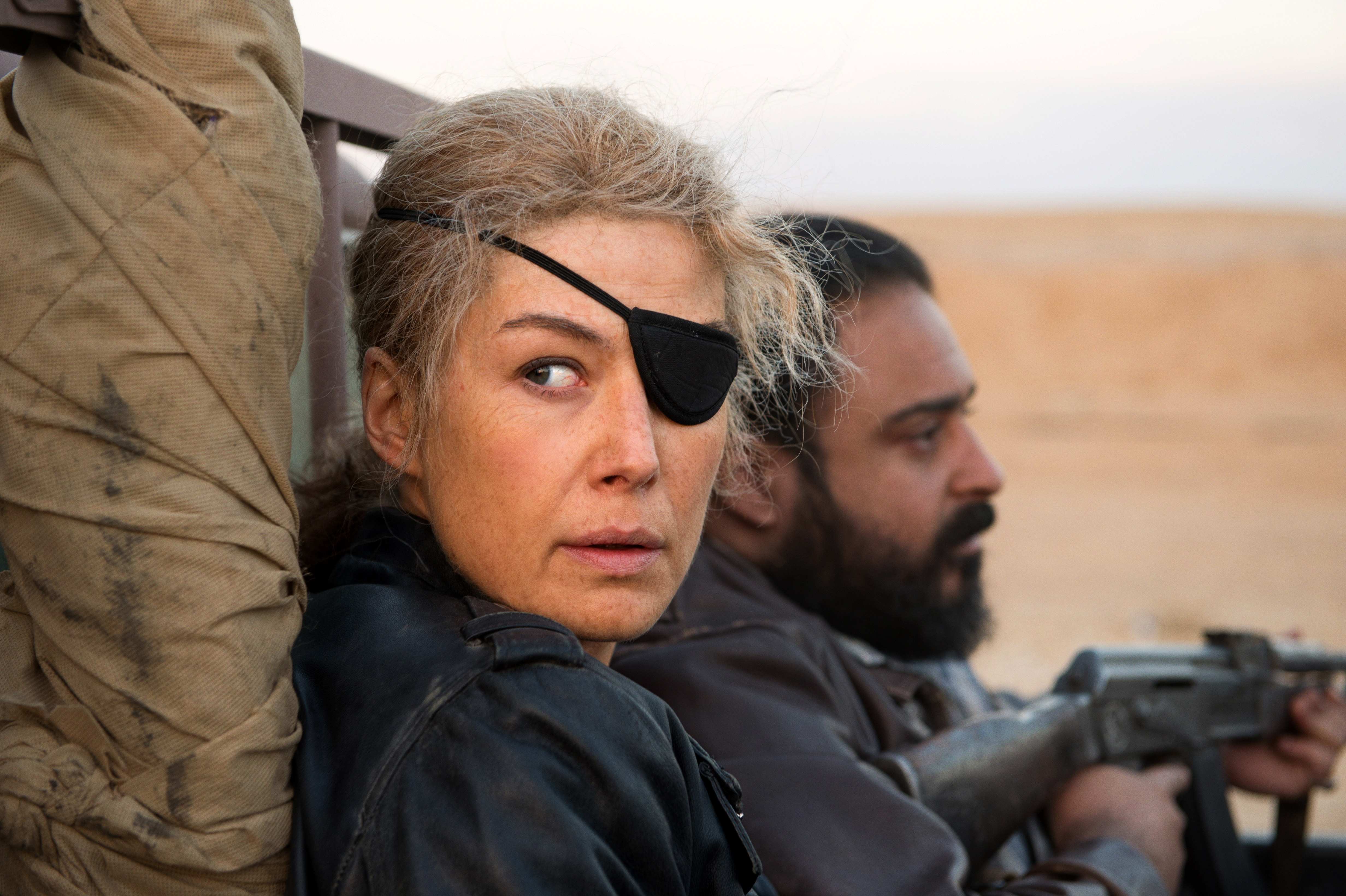 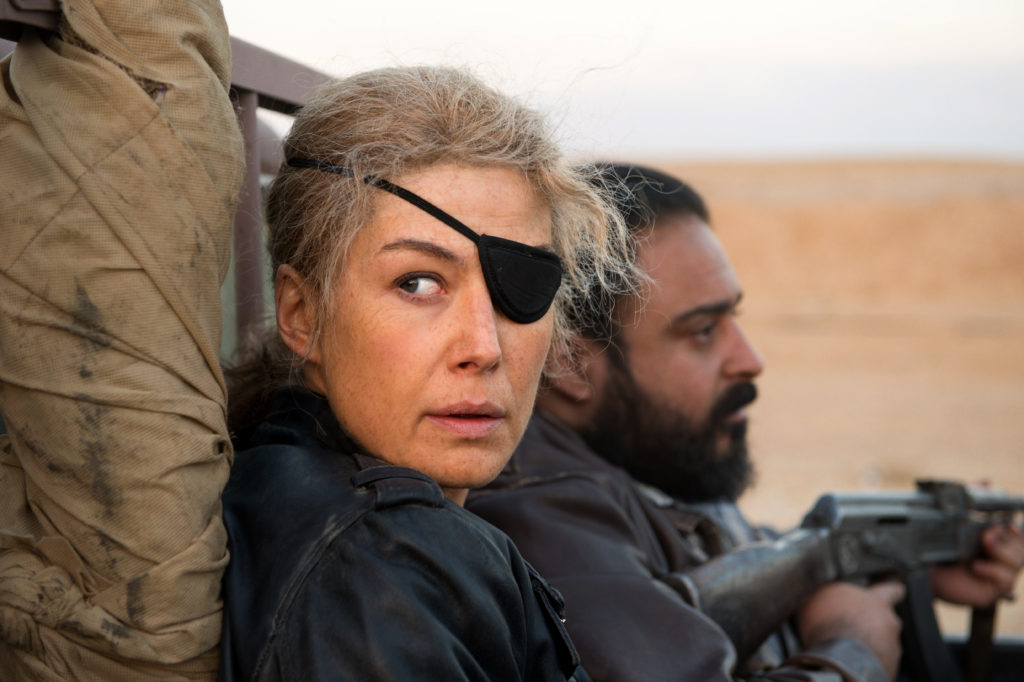 Based on the life of American journalist Marie Colvin (Rosamund Pike), “A Private War,” directed by Matthew Heineman, is a haunting portrayal of the atrocities of warfare. The film vividly depicts Colvin’s journey, covering a vast number of conflicts in countries including Kosovo, Sri Lanka, Iraq, Libya and Syria, as it elucidates the world’s blindness to its own harsh realities and true horrors, as well as the risk reporters like Colvin take in placing their lives on the line to deliver the truth.

The film begins with a silent, eerie shot of a city decimated by bombings, missiles and gunfire. From the beginning, the film does not shy away from highlighting the complete desolation of conflict-ridden cities and countries. Early scenes depict Colvin covering the Sri Lankan Civil War in 2001, where she becomes injured in an attack and loses her left eye. Back home, her husband doesn’t find her beautiful anymore and, unable to stand her eyepatch, leaves her. Thus begins Colvin’s journey of extreme psychological hardship, as she battles her personal issues while reporting upon the rampant death and destruction caused by warfare.

The movie excels at showcasing how post-traumatic stress disorder can gradually take over one’s life. Colvin has recurring nightmares of her experiences on the frontlines of conflict. Full credit for pulling off this feat goes to Pike, who delivers one of the best performances of her career to honor Colvin’s legacy. From her unabashed courage in the face of mortal danger to portraying her trauma through alcoholism and excessive smoking, Pike nails every single detail that played into her character. Her changing mannerisms, facial expressions and even the increasing hoarseness of her voice caused by cigarettes, all serve to wonderfully embody the personal struggles Colvin faced while maintaining her career. The supporting cast, namely war photographer Paul Conroy (Jamie Dornan), who embarked on Colvin’s experience, and Colvin’s editor Sean Ryan (Tom Hollander), do an excellent job with their own characters by complementing Pike’s performance and providing her with guidance, motivation and hope at appropriate times.

The film has some rapid, jarring transitions between scenes, yet it moves at a brisk pace and does not feel broken. Perhaps this stylistic element was intentionally employed as a representation of the chaotic nature of warfare, as the quick cuts sometimes left the audience disconcerted, keeping things unpredictable and disruptive. The movie consists of extremely well-done computer-generated imagery explosions and does not fall into the trap of sacrificing the quality of visual effects — a tradition for action and war movies — by keeping the use of big explosions and set pieces to a minimum. The shots were breathtaking at times, yet also evoked despondence as the audience witnessed the annihilation of formerly beautiful cities and their citizens. Innocent civilians, particularly women and children, are shown dying, as Colvin attempts to tell their heartbreaking stories to the rest of the world. The movie reveals bloody, marred bodies, injuries and, at times, even skeletons that emphasize the inhumanity of battle and cost of war. The gravitas of this, however, is much more profound compared to other war movies, as the filmmakers choose to focus on the protagonists’ reactions to such haunting images and the ways it affects their mental health.

The score is satisfying and accompanies the on-screen action well. It truly shines when the narrative moves on to a modern conflict: the Syrian Civil War. As the camera pans over the city of Homs in Syria, whose destruction was the event that catalyzed the Syrian Civil War, the track “Requiem For A Private War,” composed for this movie by Scottish singer Annie Lennox, begins to play. The song sends shivers along the spine due to its slow, melancholic tune. Lennox’s hauntingly beautiful voice, accompanied by the visuals of a once great city, now ravaged and in ruins, makes the scene a sight to behold.

“A Private War” is a fitting tribute to a woman who worked tirelessly to bring the voices of the oppressed and the unheard to the world. However, the film is more than a homage to Colvin — it illustrates the necessity of journalism. When false propaganda and information is being fed to the masses via dubious sources and social media, it is more important than ever to have journalists like Colvin who actively seek out the truth. Furthermore, it draws attention to several severe humanitarian crises of the century. Ultimately, “A Private War” is a tale of not only Colvin’s personal battles but also of the fight for humanity. The filmmakers send out a plea to the rest of the world: be aware of the inhumane acts of brutality that are happening all over the world.