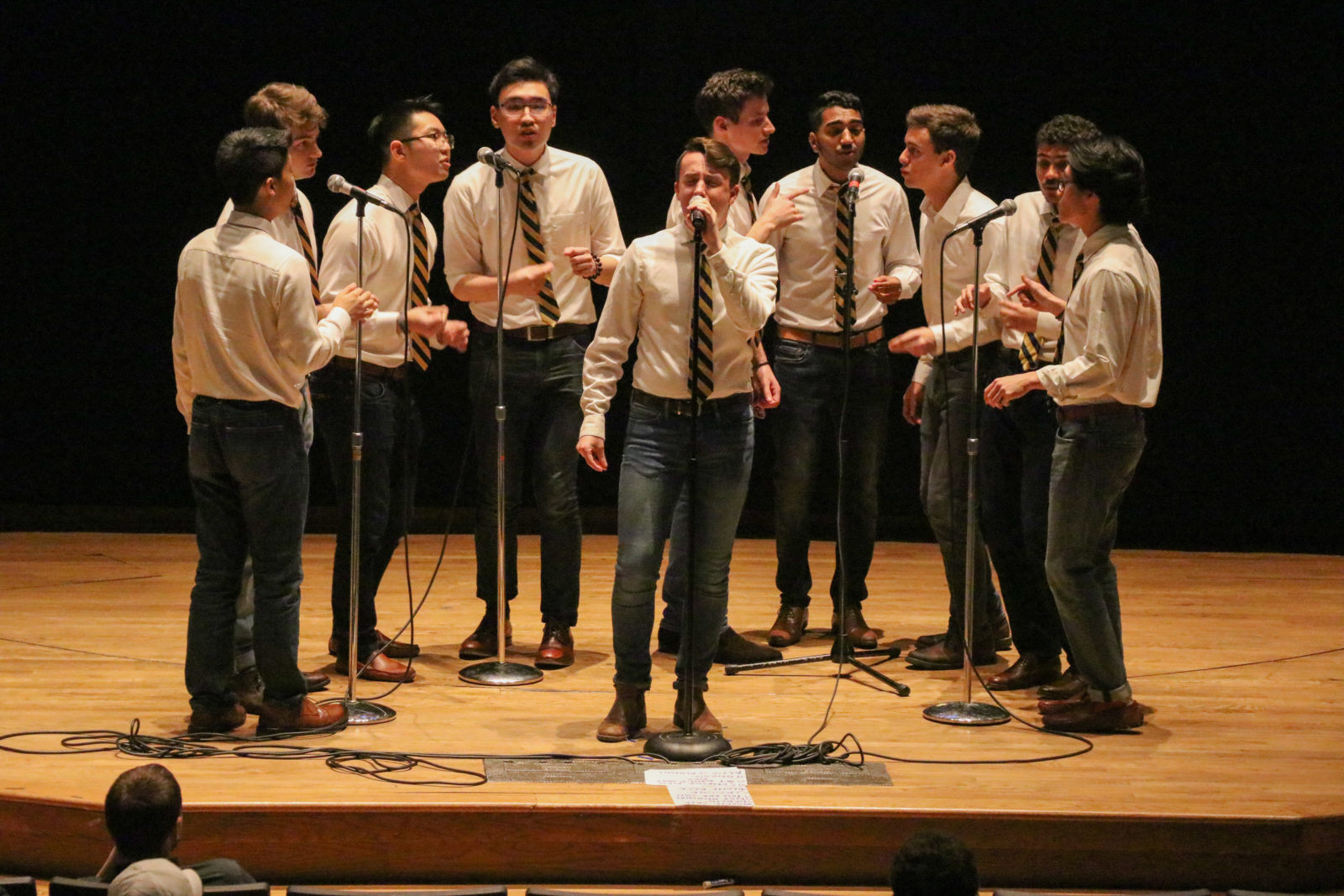 There’s only one place where you can find amusing parodies of “A Christmas Carol,” a scene from “The Bachelorette” and an a capella version of the Backstreet Boys’ “I Want it That Way”: a No Strings Attached (NSA) concert. NSA, Emory’s oldest a cappella group, held their annual winter concert on Dec. 2 in White Hall 208. More than 100 students turned out to see the 10-member all-male group perform cutting-edge arrangements, beautifully harmonized a cappella classics and hilarious in-between scenes.

NSA began in 1994 when four Emory students performed at an “Open Mic Nite” at the Dooley’s Depot. In the past, they’ve performed for countless celebrities, including Maya Angelou, former President Bill Clinton and Jerry Springer, according to their Facebook page. In addition, they’ve released nine albums of original music.

Starting with Toploader’s “Dancing In The Moonlight,” NSA’s set capitalized on each individual member’s voice throughout the night. The set included the group’s take on the songs “It’s Not Unusual” by Tom Jones, “Someone New” by Hozier and “Georgia On My Mind” by Ray Charles. They also incorporated a touching tribute to the late Mac Miller with his song “Come Back to Earth” arranged by group member Aditya Bhise (21C). Of course, the concert wouldn’t have been complete without a performance of the Backstreet Boys’ “I Want It That Way” and the Emory alma mater to wrap up the night.

The members were in sync with each other throughout the performance and their voices smoothly blended together. For Hozier’s “Someone New,” while the rest of the group sang background chords, two lead singers fluidly passed the melody back and forth, one starting as soon as the other finished. Although there were occasional instances when the melody jumped awkwardly from one singer to another, the concert was delightful. NSA’s version of “I Want It That Way” was especially fluid and showcased the voices in their group. They aced this classic a capella song and sounded nearly as good as the original.

What really completed the overall performance were the skits between the different sets. It’s obvious that singing isn’t NSA members’ only talent. With witty plots and a guy dressed in a monkey costume, it was hard not to laugh at certain points throughout the show. Even more so, the group took care in crafting a parody of Charles Dickens’ “A Christmas Carol.” They threw out the original story of Scrooge and replaced it with a humorous version showing the past, present and possible horrific future of their a capella group. For the past, the group used actual old video footage of NSA at Emory, adding a sentimental touch to this humorous, music-filled hour. Other than being an incredible lead in some of the songs, NSA musical director John Graham (19C) played the role of Scrooge while the rest of the group acted as the past, present and future of NSA.

As the show came to a close, the group asked an alumnus in the audience to come on stage. Together, they performed the last song of the night: Emory’s alma mater. The old and new voices coalesced seamlessly to craft the classic Emory tune all while sounding ethereal. The performance as a whole was heartwarming, humorous and had me in awe of these students’ masterful vocals.