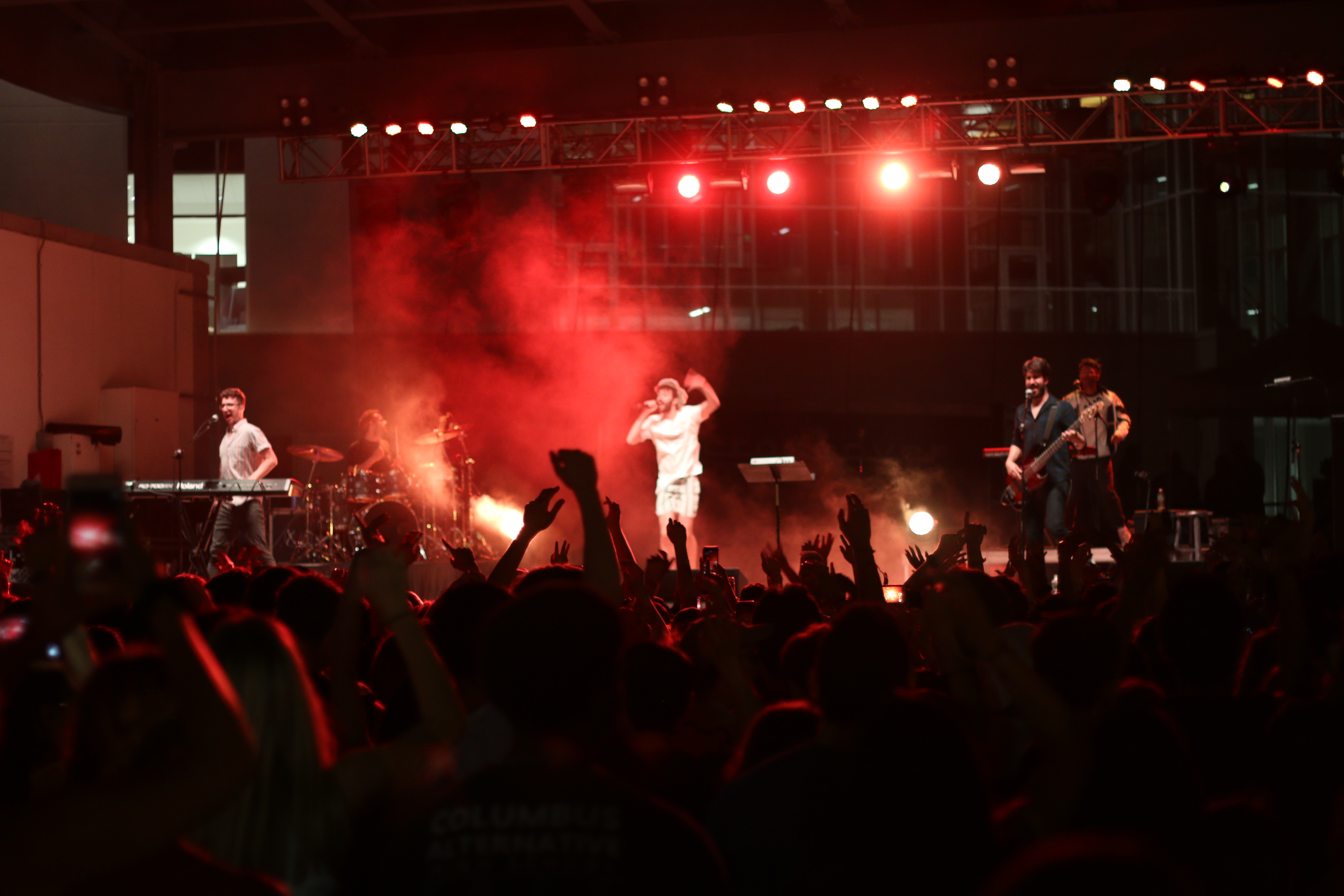 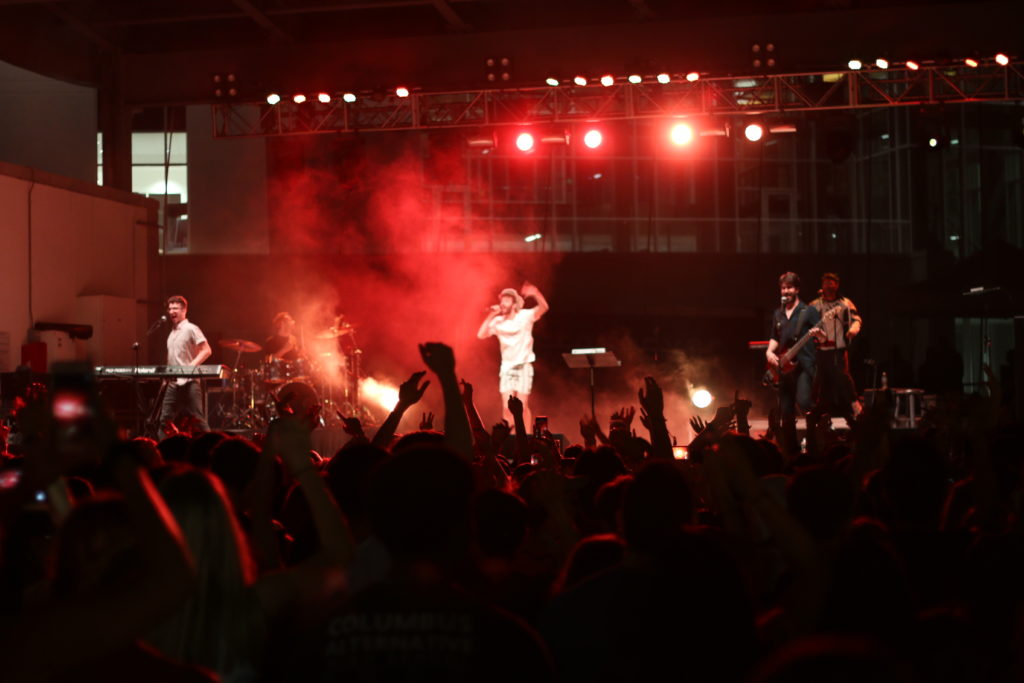 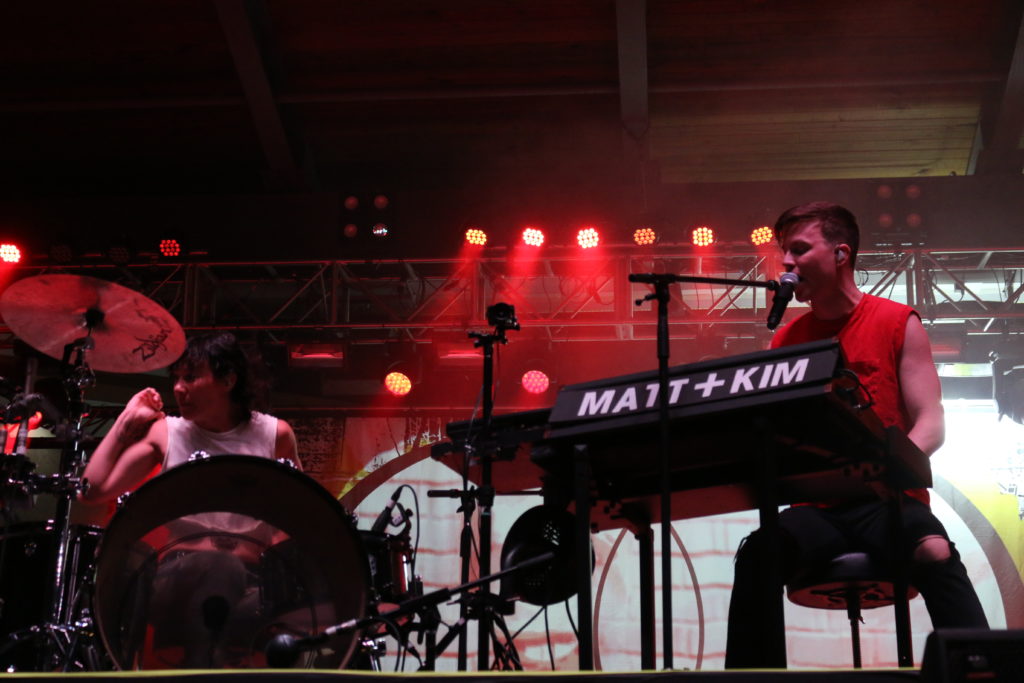 AJR brought their all to McDonough Field on April 13, as they headlined Dooley’s Ball alongside openers Prinze George and duo Matt and Kim. From the live rendition of popular song “All Star,” to the band’s bit about their music-making process, the concert was an experience like no other. Energy remained high through each song and into the encore, making the performance unforgettable.

Originally formed in 2005, AJR is a band of brothers that make most of their music out of their apartment. Adam, Jack and Ryan Met have produced a multitude of songs, including popular hits “Weak” and “Burn the House Down.” As they mentioned during their performance, their music is unique in that many of their songs focus on unconventional topics. For example, “Netflix Trip” discusses their lives in relation to beloved TV show “The Office.” Beyond that, their sound can be described as an eclectic mix of pop and dubstep.

AJR began the night with a sampler, teasing the audience with short excerpts from different songs they’d play later in the show. Then, they hyped up the audience with songs like “Come Hang Out” and “The Good Part.” With fists raised in the air, the audience moved in tandem with the beat. It was easy to get lost in the energetic atmosphere. “Sober Up” had nearly everyone singing along, and “Drama” was upbeat and riveting. AJR also remixed tidbits of other artists’ popular songs, including Mary Poppins classic “Chim Chim Cher-ee” and an acoustic version of Smash Mouth’s “All Star,” to create a more sentimental atmosphere. Most touchingly, they followed their performance of “Netflix Trip” with a nostalgic and heartwarming remix of “The Office” theme song.

Later, they recreated their songwriting process by blending a basic beat with one of their existing songs. As their set came to a close, they introduced the crowd to their newer music, including recently released single “100 Bad Days” and an unreleased track that was both emotional and catchy. After AJR left the stage, just as many thought the performance was over, the band returned to the stage one last time to perform their 2017 hit “Weak.”

Overall, AJR captivated their crowd throughout the night with their electric tones, catchy melodies and memorable bass lines. They interacted often and made an admirable effort to make concertgoers feel personally connected to the performance on stage. Their sounds were addicting, and the upbeat mood of the concert was infectious, leaving the audience wanting more, even after the encore had finished.

Before AJR stunned the late-night crowd, the evening began with musical acts Prinze George and Matt and Kim, who warmed up the crowd for the Met brothers. Prinze George brought their smooth sounds to the stage. Despite the smaller crowd, Prinze George entertained audience with their unparalleled music. Matt and Kim tossed free Matt and Kim T-shirts into the crowd and danced about the stage with such intensity that it was impossible to not want to jump and pump your fists with the raging concertgoers. They also threw a variety of props into the crowd, including a giant beach ball and a decent amount of phallic blow-up dolls. At one point, Kim even began drumming with dildos. There were a few points when the energy dipped, but Matt and Kim always managed to bring it back up, all to ready the audience for the main act. With the enthralling opener performances and riveting show by AJR, it was sad to see the concert end.

AJR will release their newest album, “Neotheater,” on April 29, and plan to return to Duluth, Ga., on November 12 as part of their next tour.