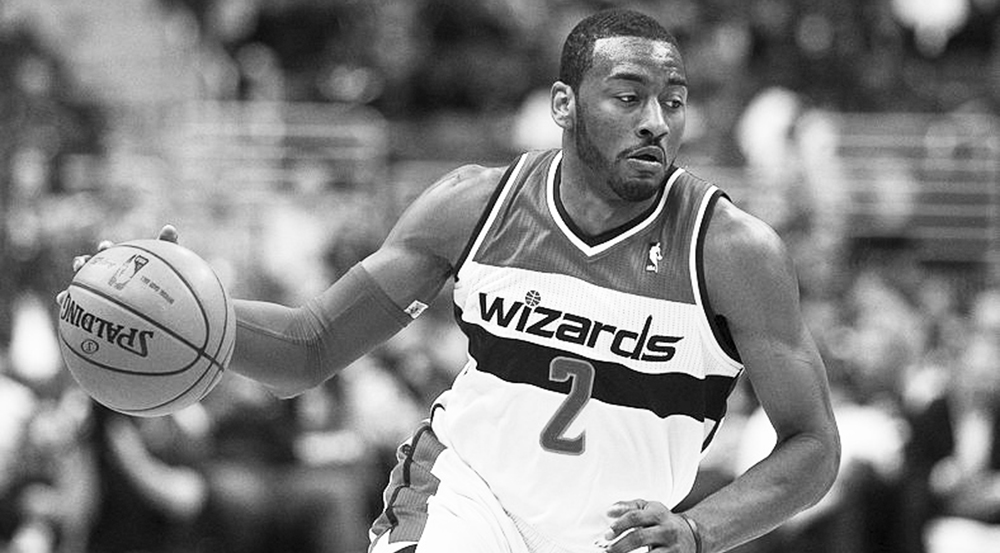 Washington Wizards guard John Wall dribbles down the court. Wall was chosen to the 2014 Eastern Conference All-Star roster as a first-time selection. Writers Durst and Janick also chose him for their Eastern All-Star roster. | Courtesy of Wikimedia Commons/Keith Allison.

The NBA All-Star Team starters are selected by fan vote, and therefore, there are some major errors in the selections. This week, Nosebleeds brings you the players who should have been picked for the starting lineups.

Nathan Janick: Wall has emerged as one the top point guards in the NBA this year. Known for his electric speed and explosiveness, Wall has proven this year that he is a well-rounded point guard. He is the best player on the third-place team in the East and is leading the league in assists with 10.2 per game. He leads the Wizards in scoring with 17.4 points per game. Wall will be in the conversation for best point guard in the league within the next couple of years.

Jacob Durst: I’m going to start off by saying that Lowry not making it last year in order to make room for Joe Johnson made me question my life. There’s no mistaking it this year though, Lowry deserves to start the All-Star game. He was the best player on the best team for the first 20 to 30 games of the season and his production still hasn’t slipped. He’s averaging 19 points, seven assists and five rebounds a game. He’s good and he’s going to be a mainstay at this position for the next few years.

NJ: He 100 percent deserves to be on this list. When somebody asks who the best player on the Chicago Bulls is, don’t be stupid and say Derrick Rose. Butler doesn’t have the name recognition or shoe deal that Rose has, but Rose hasn’t returned to his MVP performance since his knee injuries. Butler’s 20.5 points per game has helped the Bulls prove that they are contenders for the Eastern Conference title once again.

JD: James may not be the best player in the NBA anymore, but he’s been a far cry from a bad player. He’s second in the league in points per game at 26.2. He’s the only reason that Cleveland is competitive, given the collapse of Kevin Love, and Kyrie Irving’s inability to pass the ball. He has by far the best player efficiency rating (PER), of any full-time player, at least in the East, at a shade over 26. Plus, we all know the best is yet to come from him, as he coasted for almost all the first half.

NJ: Excluding an Atlanta Hawks player from the starting lineup would be a crime. Horford is arguably the Hawks’ most valuable player. The Hawks were on pace to be the third seed in the East last year before he went down with a torn pectoral muscle. He is averaging 15.3 points and seven rebounds a game, which won’t blow anybody away, but his impact on both ends of the court cannot be fully captured by statistics.

JD: Is it even a question that the game’s best player this year deserves to start? Two Western Conference Player of the Month awards, 27 points, seven assists, six rebounds, on 45 percent shooting, 38 from the three, 89 from the line, with defense that’s passable most nights now. He has been the best player in a loaded Western Conference. If you don’t think Harden is the MVP right now, you’re blind.

NJ: The only player that you can put in the same conversation for MVP with Harden is Curry. He is the best player on the best team in the West and has been lighting up the entire league this year. Curry has excelled in Steve Kerr’s new offense, averaging 23 points. While his MVP candidacy might be slipping away, he is an easy pick as the second starting guard in the West.

JD: Aldridge may not be the best player on his own team, but given how stacked the West backcourt is, and the fact that he’s still putting up 24 points and 10 rebounds night-in and night-out, he’s a solid choice to start for the West in the frontcourt. He’s been the best forward in the West not named Anthony Davis. He may not be on Davis’ level defensively. That’s no knock on him, but rather a compliment to Davis. I expect a big second half from him as well as the Blazers make a push for the second seed.

NJ: MVP, MVP, MVP. Well maybe not this year, but Davis is my favorite to win the MVP next year. He is single handedly keeping the Pelicans in the race for the Western Conference playoffs and leads the lead in PER by a large margin. He is averaging 24.6 points, 10.5 rebounds, and leads the league with 2.8 blocks a game. Let’s not forget he is only 21-years-old. When he wins a MVP before Durst and I graduate, we will make sure to say we told you so.

JD: Gasol’s modest 19 points per game and nine rebounds understate his importance to a Memphis team that would be likely to collapse if he wasn’t around. He’s a defensive powerhouse and probably the best defensive big man in the league. He can pass the ball like a guard and is the only reason that the Memphis offense, if you can even call it that, somewhat works. We’re going to wait one more year on DeMarcus Cousins, just to make sure that his jump is here to stay, and with Dwight Howard missing as much time as he has, it’s a no question as to who’s the best center in the West.​