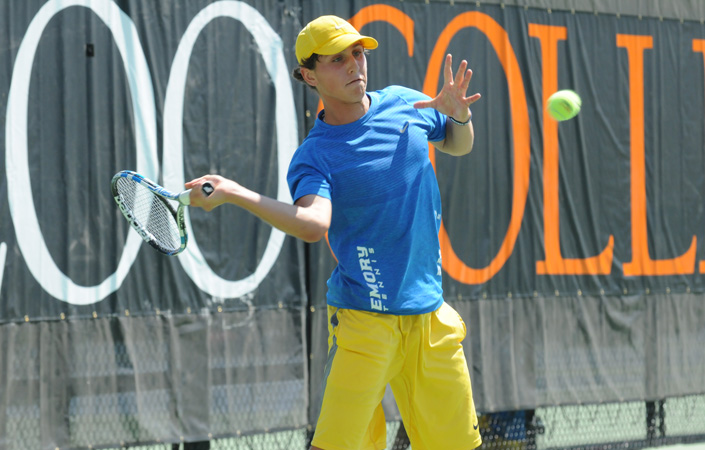 The Emory men’s tennis team was unsure of what to expect this season. The Eagles graduated three of their top four singles players after losing to Washington University in St. Louis (Mo.) in the quarterfinals of last year’s NCAA Division III Championships. Yet, they began their next season by winning the 2016 Intercollegiate Tennis Association (ITA) National Indoor Championships and went on to an undefeated regular season and a No. 1 ranking at the NCAA Tournament.

“You never know what to expect when you lose half your team,” senior captain Rafe Mosetick said.

“Going into indoors, I had no idea how we were going to do. There were so many question marks,” Head Coach John Browning said.

However, the Eagles answered questions when they won the DIII Indoor Championship, where Emory had lost in the finals the previous three seasons.

“Indoors was the initial benchmark for how good we were going to be this year,” Mosetick said. “It just seemed to come together. Everyone was playing for each other. We really bonded over that tournament, and I believe how we did at that tournament was the starting point for our great season.”

Ranked No. 1 in the initial 2016 ITA rankings, Emory continued to show its potential, winning the Stag-Hen Invitational in Claremont, Calif., with a 7-2 victory over defending national champion and No. 2 Claremont-Mudd-Scripps (Calif.). Claremont-Mudd-Scripps’ had not lost in the D-III regular season loss since 2012.

Emory’s dominance continued throughout the regular season as they went undefeated against D-III competition. Their only losses came against Georgia Gwinnett College and Georgia State University, who compete at the National Association of Intercollegiate Athletics.

A large part of Emory’s success this season can be attributed to contributions of its younger players who stepped up in big roles throughout the season.

“The new guys who came in really stepped up,” Mosetick said. “They far surpassed anything I believed was going to happen this season. I’m very proud of each and every one of them.”

This young group of talent was highlighted by freshman Jonathan Jemison, who played No. 2 singles and No. 2 doubles.

“I knew he was really good, but what I was more impressed with Jonathan was how committed he was to the team. He adjusted to the team concept right away,” Browning said. “From high school to college is a big adjustment; [freshmen] are not used to pace of the season and ups and downs. For Jonathan to come in and not have that freshmen dip was amazing.”

Emory entered the D-III NCAA Championships as the No.1 seed. The Eagles cruised to victories in the first two rounds after their bye against Washington and Lee University (Va.) and after they defeated Trinity University (Texas) without dropping a match. Against Kenyon College (Ohio) in the quarterfinals, Emory advanced easily, winning 5-1.

In the semifinals, Emory faced No. 4 Bowdoin College (Maine). The No. 1 doubles pairing of sophomore Scott Rubinstein and freshman James Spaulding and the No. 2 doubles team of Jemison and Mosetick both defeated Bowdoin, but the No. 3 doubles players, sophomores Andrew Harrington and David Omsky, lost 9-7 in a close match.

Going into singles play up 2-1, the Eagles  knew they had their work cut out for them. “We knew [Bowdoin’s] singles was going to be their strength,” junior Josh Goodman said.

The Eagles’ loss in the semifinals was disappointing result, as the team had very high expectations entering the tournament as the No.1 seed. However, looking back to the very beginning, this season can be described as an overwhelming success.

“If you were going to tell me that we were going to make it as far as we did before the season, I might have told you that you were crazy,” Browning said.

The future looks bright for Emory tennis, with Mosetick being the only graduating player in the lineup. This past year, the young Emory team got valuable tournament experience.

“[The younger players] finally got a taste of what is like to be in the big lights and be that close to winning it all,” said Mosetick, who will be returning to the Emory tennis program as an assistant coach next season.

Browning said the team hopes to pick up right where they left off next season.

The tennis team’s expectations will be high next year with so much talent returning, as they eye their fourth national championship since 2003.