With the Cowboys at home this week, it’s going to be tough for the Rams to win. Sam Bradford is off to a good start this season and is finally proving his worth as a first overall draft pick. Despite their tough loss to the Chiefs last week, the Cowboys had a strong offensive showing in their blowout of the Giants in week one. On top of their offense, the Cowboys’ defense looks to have fixed all of their defensive problems from last year. Dallas is expected to win by four and a half points; justifiably, based on the way Dallas usually plays at home.

Last week was another rough week for the Washington Redskins, who lost by 18 to the Packers. However, despite the large loss, the Redskins showed signs of improvement in the second half of the game – possibly enough to get them their first win this week. The Redskins outscored the Packers 21-13 in the second half of the game and Robert Griffin III played significantly better than he did in week one.

The Lions are coming off a loss to the Cardinals, where the Lions lacked the strong running offense they had in week one from Reggie Bush. It should be interesting this weekend to see if Matt Stafford is phased by the young Redskins pass rush of Brian Orakpo and Ryan Kerrigan. Washington is favored by one point in this game, largely due to the fact that they are the home team. I think the point spread is very accurate in this game in that I project the Redskins to just sneak by the Lions to get their first win of the season. Lions 24 Redskins 27

The Bears head to Pittsburgh to take on the struggling Steelers this Sunday. And it looks like the Steelers are going to continue struggling. While their defense hasn’t been terrible, their offense has been lacking the ability to put points on the board. Big Ben and the Steelers have put up only 19 points combined in the first two weeks of the season. Yeah, that’s 19 total points. The loss of Rashard Mendenhall is impacting the Steelers’ running offense more than they thought it would. Their yards-per-rush is the second worst in the league at only 2.4 yards-per-rush. It’s hard to say that the Steelers will start the season 0-3 but they’re going to have trouble showing signs of offensive production against Chicago’s stonewall defense.

With Jay Cutler making more accurate throws this year and Matt Forte being healthy, the Bears’ offense is looking better than ever. Look for the Bears to move to 3-0 and the Steelers to sink to 0-3 this weekend in a somewhat low-scoring game. Bears 20 Steelers 10

The interesting part of this matchup will be the Falcons’ pass-heavy offense against the surprisingly tough Dolphins’ defense, which ranks No. 2 in interceptions and No. 1 in team sacks. After a disappointing week one showing from newly-acquired Dolphins wide receiver Mike Wallace, the receiver got into a groove last weekend with Ryan Tannehill, hooking up for nine catches and 115 yards. Look for the two to connect again this week. Miami is favored by one in this game and despite my initial thoughts that the Falcons are going to take the win, I’m starting to think otherwise. Falcons 28 Dolphins 30 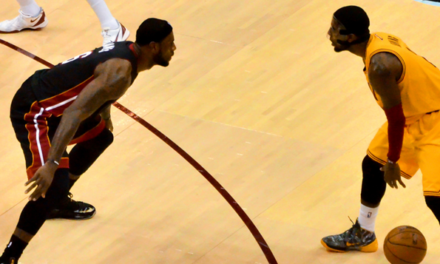 Playoff Players With The Most at Stake

On Fire | Blame It On the Boogie

Swimming and Diving Team Combines Love of Sport with Volunteering