This week’s NHL action saw some new teams creep up on the top five in the power rankings. After solid performances by the Boston Bruins, Columbus Blue Jackets and St. Louis Blues, three new teams are under consideration for a coveted position in the top five. While the three teams’ recent winning records help their causes, they still lag behind some of their counterparts in the standings.

Turnaround in the rankings has the Tampa Bay Lightning qualifying for a top spot and the Pittsburgh Penguins falling barely outside. A pair of losses to Metropolitan Division rivals the New York Rangers and Washington Capitals capped off a frustrating week for the Penguins. The Lightning generated dominant performances against the Buffalo Sabres and Philadelphia Flyers, proving themselves as among the league’s best. The following rankings are based off play to date.

The main storyline for the Rangers continues to be forward Michael Grabner’s re-emergence. Grabner is tied with Pittsburgh Penguins forward Sidney Crosby and Winnipeg Jets forward Patrik Laine at 12 goals. Grabner’s speed has made him effective, beating the opposition to loose pucks and quickly transitioning to put shots on net. When on ice together, the effective duo of forwards Kevin Hayes and J.T. Miller have also contributed to the Rangers’ offense. However, this past week, the Rangers were less than flawless: they lost consecutive games and started off slow against the Pittsburgh Penguins Monday, Nov. 21. After falling behind 2-0 after the first period, forward Rick Nash jump-started the Rangers’ offense, and they eventually won the game 5-2. When the Rangers connect on their passes and avoid turnovers, their offensive attack is prolific.

The Blackhawks were looking to tie Montreal for the top record in the NHL Monday night against the Edmonton Oilers, but faltered with a 5-0 loss. Nonetheless, the Blackhawks have remained resilient thus far this season. On Saturday, Nov. 19, the Blackhawks trailed 3-0 against the Vancouver Canucks after two periods, but they responded by scoring three goals in the third period to send the game to overtime. In the overtime period, back-up goaltender Scott Darling made spectacular saves against the Canucks. He held off the Canucks attack long enough for forward Marian Hossa to slice through the Canuck defense and score the game-winning goal, his second in consecutive games. His timely production has helped the Blackhawks nudge out close games and enjoy a 13-5-2 record.

The highlight of the week for the Washington Capitals was besting their division rival, the Pittsburgh Penguins, 7-1. Forward Nicklas Backstrom exploded and put up a five-point performance against the Penguins, in addition to solid play from forwards T.J. Oshie, who scored two goals, and Alex Ovechkin, who re-emerged by tallying a goal. Goaltender Braden Holtby also put together an impressive week, yielding all but one goal to the Penguins and shutting out the Detroit Red Wings. Despite a 3-2 loss to the Columbus Blue Jackets Sunday, Nov. 20, the Capitals are still four games above .500. With Ovechkin scoring two goals this past week, the Capitals’ offense appears dangerous.

The Tampa Bay Lightning replace the Penguins in this week’s top five. In dominant fashion, the Lightning won two of their three games. On Thursday, Nov. 17, the Lightning defeated the Buffalo Sabres 4-1. Forward Valtteri Filppula recorded two primary assists, making two one-time passes that were converted into goals. Two nights later, the Lightning defeated the Philadelphia Flyers 3-0. Back-up goaltender Andrei Vasilevskiy put up his second straight shutout. Even in the absence of the team captain, forward Steven Stamkos, the Lightning’s mix of young talented forwards has kept the team’s offense on track. 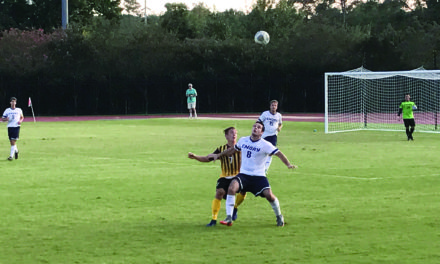