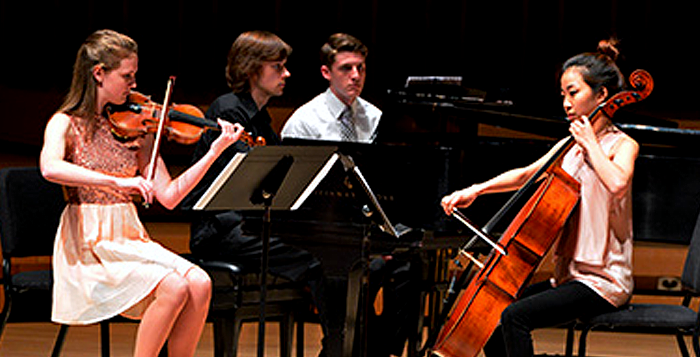 The Emory music program never ceases to amaze. This Sunday, various student chamber ensembles performed in two concerts at the Schwartz Center for the Performing Arts’ Emerson Concert Hall. Each concert featured student musicians in more intimate settings than those afforded by large ensembles such as the Emory Symphony Orchestra and the Emory Wind Ensemble. With fewer than 20 performers in even the largest ensemble performing Sunday, every musician played a crucial role. Since this was a setting so focused on the individual, it was exciting to see my peers perform this way.

To begin the first concert, which featured various woodwind, brass and percussion chamber ensembles, the Emory Percussion Ensemble took the stage with two pieces featuring a range of percussion instruments.

The opening work of the performance, “Trio per Uno” by Nebojsa Zivkovic, was written for a percussion trio (and in this case, performed by College sophomores Matt Gallub and Cole Owens and Goizueta Business School sophomore Dan Martin) circled around a large bass drum turned on its side. Necessarily rhythmic, it started the show off with energy and fun and set the stage for what was to come.

The Emory Percussion Ensemble then put on a larger ensemble of keyboard percussion instruments (think instruments related to the xylophone!), which presented the surreal and ethereal “Ceiling Full of Stars” by Blake Tyson.

Afterwards, the Emory Woodwind Quintet took the stage and performed Thomas Schneider’s arrangement of J.S. Bach’s “Prelude and Fugue, No. 22” from “The Well-Tempered Clavier.”

The group consisted of College senior Melanie Zhang on flute, College senior Alexander Zhang on oboe, College sophomore Michelle Rosenthal on clarinet, College junior Alex Lutz on horn and College freshman James Cahill on bassoon. Ultimately the piece sat quite well with the instrumentation and was light and recognizable.

The Emory Flute Ensemble sat down to play after the quintet had left the stage, presenting the audience with an arrangement by Nourse of the overture to Mozart’s “The Magic Flute.” Appreciated by the audience for its positive airiness, it provided a great contrast to the previous pieces.

Ending the concert with a very real bang, the Emory Samba Band stormed the hall. The largest group that performed on Sunday, the Emory Samba Band featured 17 Emory students on various percussion instruments from the Brazilian Samba tradition. It was a riveting performance, with not a single still-body in the audience – no one I noticed could resist at least tapping their foot to the Afro-Cuban rhythmic symphony before us.

My personal favorite moment of the concert was in the first piece the band played, one of two traditional sambas, in which the ensemble as a whole danced around in time to what they were playing.

They were clearly in love with their music – a powerful end to the first chamber concert of the day.

College sophomores Casey Costello and Oscar Gryn performed two pieces for piano duo, specifically selections from Maurice Ravel’s Debussy transcription “Nocturnes for Two Pianos” and Manuel Infante’s “Danses andalouses for Two Pianos,” both of which were technically challenging and quite invigorating for the audience to watch.

The quartet played a selection from the “String Quartet in F major, Op. 96 ‘American'” by Antonin Dvorak, a very famous and popular piece that many in the audience immediately recognized.

This group presented a selection from Antonin Dvorak’s “Piano Quintet,” offering a rousing end to the evening that left the audience wanting more: only after a few moments of an empty stage, and silence, did the crowd slowly file out the door.

The Emory music community has many talented students, and this evening certainly proved that it is worth the effort to make it out to their performances – you will be amazed at what your peers can do.