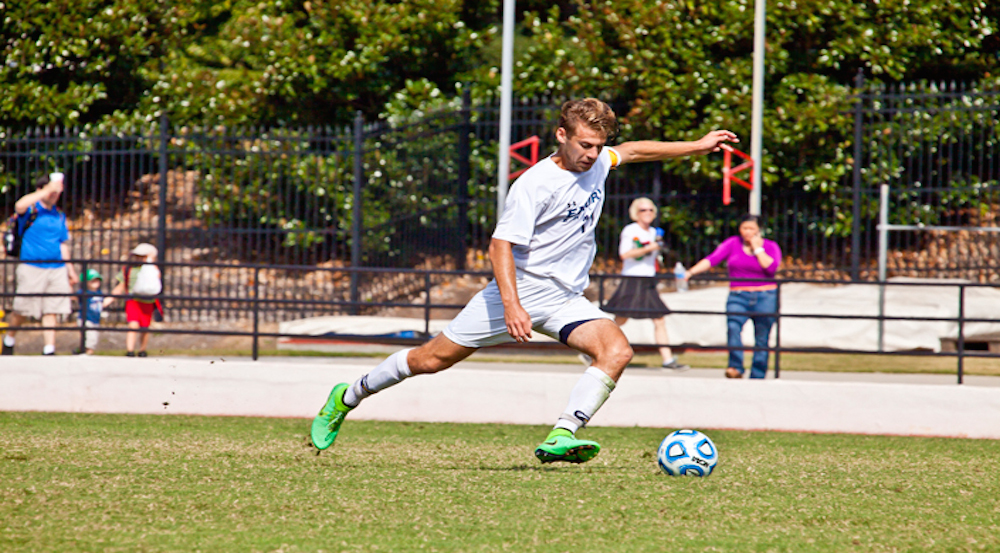 The 23rd-ranked men’s soccer team dropped a pair of games this weekend at Centre College’s (Ky.) 26th Annual Bob Allen Nissan Classic. The Eagles lost to the host Colonels in a 1-0 overtime heartbreaker on Friday before falling to the Spalding University (Ky.) Golden Eagles on Saturday. The team fell to 1-3-1 on the young season and has lost three straight games.

After waiting through a lightning delay on Friday night, the Colonels tested Emory senior and goalkeeper Abe Hannigan early, peppering the Eagles’ goal with a trio of shots in the opening 15 minutes. Hannigan, a four-year starter in the midst of a fine senior season, was able to save all three.

The Eagles needed a strong game from him. Centre totaled 17 total shots and 11 shots on goal, but thanks to Hannigan’s 10 saves, none found the back of the net in regulation.

Emory had opportunities to win in regulation as well. The Eagles had 18 shots on the game, including a season-high four from junior midfielder Scott Haley. Haley had the first shot in the overtime period after a scoreless 90 minutes but couldn’t net the game-winner.

Centre junior and midfielder Christian Gateskill provided the difference-maker early in the second overtime, knocking in a deflection of a shot from freshman midfielder Alexander Garuba in the 103rd minute.

Senior forward Sebastian Hardington had another strong game for the losing side, leading the Eagles with three shots on goal.

Travis was disappointed with his team’s inability to finish but still optimistic about their attack.

“That was our pattern this weekend,” he said. “We created chances; […] we just failed to convert.”

Saturday followed suit. This time, though, the Eagles’ opponent struck early — Spalding got on the scoreboard in the 28th minute with a goal from senior midfielder Julio DeLeon. Emory and Spalding traded unsuccessful attacks until well into the second half, when DeLeon struck again, passing to junior forward Cory House, who put a shot past Hannigan to give the Golden Eagles a 2-0 lead.

The deficit was too much for the Eagles to overcome. Senior defenseman Matt Sherr provided a spark in the 73rd minute, scoring his first goal of the season to put Emory within striking distance, but House added his second goal of the game just four minutes later to put the game out of reach.

Hardington and Haley both had three shots for the Eagles, while sophomore forward Austin Mirabella led the team with a pair of shots on goal.

Despite the tough weekend, Travis complimented his team’s performance against a pair of strong opponents on the road.

The Eagles will try to snap their three-game losing streak this Saturday when they host Berry College at 2 p.m. at the Woodruff P.E. Center (WoodPEC).