John Lewis Implores Students to Turn Out on Tuesday 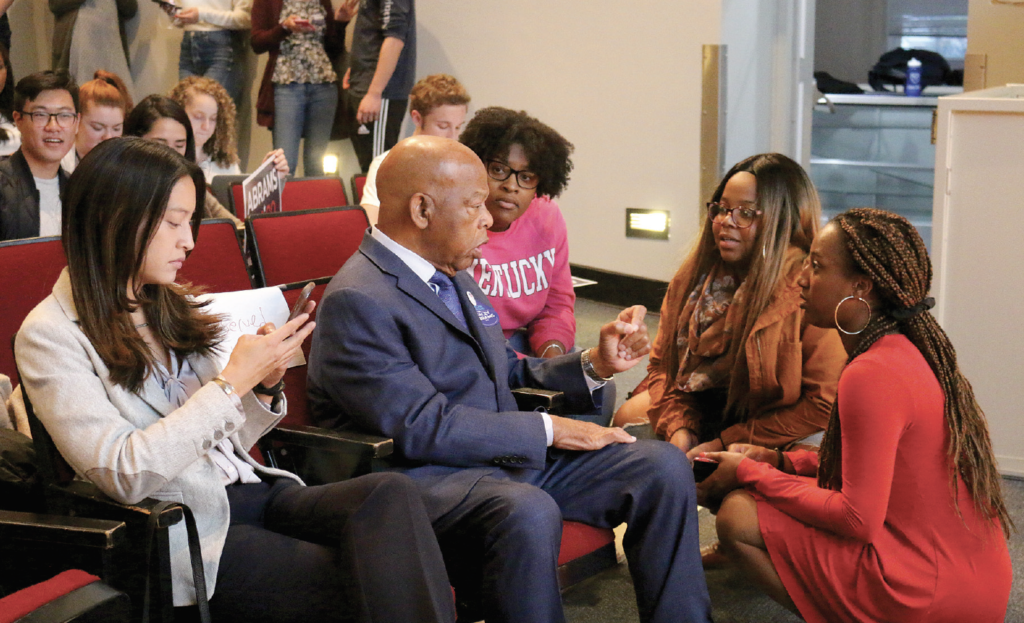 About 50 students attended the event, which was held in Harland Cinema.

Lewis implored young people to be optimistic and engage in progressive politics.

“I say to you as young Democrats: stand up, speak up and speak out and never ever give up,” Lewis said. “Be hopeful, be optimistic, never become bitter. There are forces in America today, in high places, trying to turn us back, divide us. … We have to take our country back, and we have to save our democracy for generations yet unborn.”

A recent Harvard Kennedy Institute of Politics poll found that 18- to 29- year olds are more likely to vote in the 2018 midterm elections than in the past two midterms.

Lewis, who grew up in Troy, Ala., rose to political prominence during the civil rights movement, and has served as the U.S. representative for Georgia’s 5th congressional district for 31 years. To excite students about taking political action, the politician recounted his own motivations.

He began his address by recalling significant moments from his childhood and young adult life.

“One day I heard [Martin Luther King Jr.] speaking on the radio, it seemed like he was speaking directly to me, saying ‘John Lewis, you too can do something’ … and I was moved to get involved in the civil rights movement,” Lewis said.

Lewis also described when a librarian refused to issue him a library card when he was a teenager because of his race, adding that he was impressed by the progress of civil rights since then.

“I never went back to that library until July 5, 1998, for a book signing,” Lewis said. “Hundreds of black and white citizens showed up, and they gave me a library card. That says something about the distance we’ve come and the progress we’ve made.”

Nguyen, who replaced Abrams as the state representative for Georgia House District 89, spoke about her encounters with racism as an Asian-American politician.

“I was one of only two Asian-Americans out of the potential 236 seats in our Georgia General Assembly,” Nguyen said. “On my first day, one of my colleagues walked up to me and he said, ‘Are you our state’s first oriental?’ and I said, ‘No sir, I’m Asian-American.’”

“My parents are former refugees from Vietnam, and in the late ’70s my parents fled their country to come here,” Nguyen said. “They were fleeing from oppression and violence just for the hope of being able to build a better life. There were no guarantees.”

Nguyen said Abrams’ strategy of reaching directly to voters influenced her own campaign strategy. She concluded by encouraging students to support efforts to elect Abrams.

“I can’t think of a better way to push back on everything that’s happening than to elect Stacey Abrams,” Nguyen said. “We can win, but it requires us making sure that we spend all of our energy between now and next week mobilizing people … who don’t think that their vote matters anymore.”

“My paternal grandmother … worked all of her life as a domestic because people did not see her worth as a black woman,” Hatchett said. “I am standing on her behalf today and generations of women throughout this nation who did not have the opportunities that we have now.”

Brett Kleiman (20C), co-President of Young Democrats of Emory, said he was proud of the club’s efforts supporting the Abrams campaign and registering students to vote. He said that the club has registered about 500 Emory students.

Ben Rushin (22C) said the speakers were inspiring and that he believed in Abrams’ message.

“All the speakers gave their personal stories, and it was really inspiring to me,” Rushin said. “Our nation is so polarized and there is so much hate in the country. I think Stacey’s platform is one of compassion.”