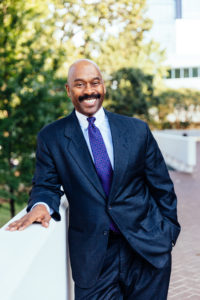 During his two-year term, Emory School of Law Interim Dean James B. Hughes Jr. said that he plans to advance the school’s five-year strategic plan, which includes improving transactional law programs and building upon the school’s success in diversity recruiting of students and faculty.

Hughes also said that Emory Law is willing to evolve to strengthen its program, pointing to how it has piloted an online Juris Master program, worked with the Emory and greater Atlanta community or evaluated new admissions options.

Although he has no plans to apply for the permanent dean position, Hughes said that he is excited and honored to serve as interim dean. Prior to his Sept. 8 appointment to the interim position, he was the associate dean for academic affairs at the School of Law from 2002 to 2006 and 2014 to 2017. He also taught courses in property, real estate sales and finance and professional responsibility, according to a University press release.

Hughes replaced Judson Graves, who was appointed interim dean in June but stepped down due to personal reasons, according to the press release. Former School of Law Dean Robert A. Schapiro stepped down March 2017 to return to teaching.

To increase the law school’s academic breadth, Hughes pointed to a certificate program for students specializing in transactional law, which includes securities offerings, corporate transactions and mergers and acquisitions.

“For years, we have had a very, very strong litigation department, [but we know] many of our students aren’t litigators — they’re transactional lawyers,” Hughes said. To reflect that, “We now have a corollary program that’s available to our students: a transactional certificate program.”

The program features a variety of distinguished, local lawyers who teach courses on transactional law and aims to provide law students more exposure in that area.

Emory Law has also been making significant steps toward increasing diversity of students, faculty and staff, Hughes said. Hughes said that he is proud to report a much larger number of international students than in previous years, especially in its Master of Laws (LLM) degree program, which currently has more than 100 international students. In terms of faculty members, Hughes pointed to Associate Professor of Law Fred Smith and the return of Asa Griggs Candler Professor of Law Margo Bagley, two African-American professors who were recently hired.

Hughes also pointed to Emory’s Black Law Students Association, which won National Large Chapter of the Year for the past two years and a diversity award from the American Bar Association in 2017.

Emory Law is attempting to fulfill its strategic plan through its collaboration with the community and the rest of the University, according to Hughes.

For example, Deferred Action for Childhood Arrivals (DACA) program is “a very important issue, and our faculty, the ones with expertise, are very eager to be helpful any way that they can,” Hughes said. Established in 2012, DACA is a temporary immigration benefit granted to some undocumented immigrants who were brought to the United States as children. The program offers a work permit and two years of deportation protection. To be eligible for the program, one had to be enrolled in high school or hold the equivalent of a high school diploma and have a clean criminal record.

A DACA application renewal workshop will be held Sept. 30 under the guidance of Emory Law’s Assistant Dean for Public Service Rita Sheffey. The workshop is focused on helping undocumented people renew their applications by the Oct. 5 deadline.

Hughes also stressed the law school strategic plan’s goal for a more individualized experience for its students. The strategic plan was developed in 2014.

“[Emory Law’s] goal is to help students define their own individual path into the legal arena, whether that’s the legal academy, the private sector or public practice law,” Hughes said. “We want to make sure that students have the opportunity to craft the best process for them.”

“We are in a position where we could rely on the GREs if we sought to do that,” Hughes said. “We are still in the process of evaluating whether that’s an appropriate move for Emory Law or not, but again, that is a movement that is picking up steam in the legal academy, and more and more schools are starting to do that.”

The law school is also making its courses more flexible for students. This academic year, the law school initiated an online Juris Master program for those who want “the Emory Law experience” but cannot manage the residential aspect of the traditional program because they have a full-time job or due to other circumstances. There are currently 23 people enrolled, according to Emory Law Director of Communications Kenyatta Greer.

Hughes received his undergraduate degree from the University of Connecticut in 1976 and his Juris Doctor degree from Yale University (Conn.) in 1979 before coming to Emory in 1992, where he has worked in various administrative and teaching positions for the past 25 years.

Correction (9/27/17 at 9:51 a.m.): The photo of Hughes was incorrectly attributed to Emory Photo. It is courtesy of Annalise Kaylor.